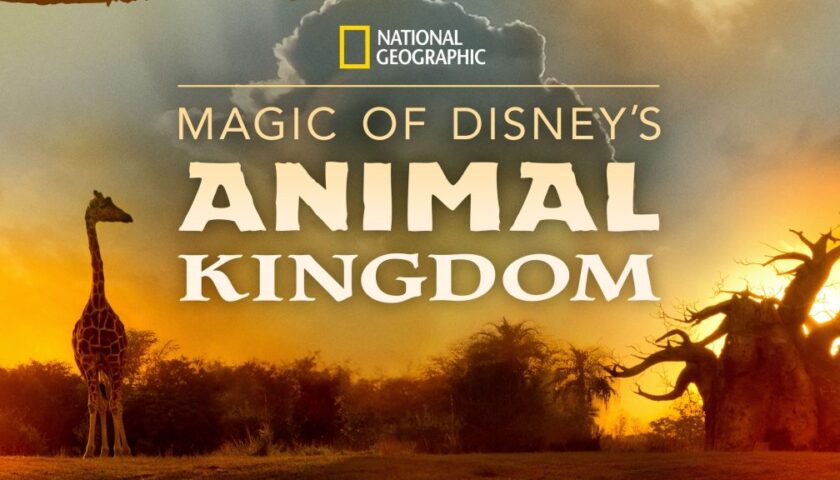 This series consists of eight episodes, that will drop weekly through the Fall and I’ve been able to watch the entire series early.   Each episode is around 40 minutes long and focuses on a few different species of animals at the parks, giving us plenty of detail on how the cast members look after them.   We also hear from Disney Imagineers who share an insight into how the park was built and the day to day running of the theme park operates, especially once the crowds leave the park.

There are plenty of different animals showcased throughout the series, including well-known animals like Tigers, Gorillas, Elephants, Lions, Giraffe’s, Hippos and much more.  Along with giving us some lesser-known animals that are just as interesting to learn about.

With Disney purchasing National Geographic as part of the 20th Century Fox deal, one of the first things that came to mind was how Nat Geo would be a perfect fit for some corporate synergy with the Animal Kingdom theme park in Orlando.

And it didn’t take very long for this to come to fruition, as the latest National Geographic documentary series, “The Magic Of Disney’s Animal Kingdom”, is frankly one of the most synergistic pieces of content available on Disney+.  While that might sound a bit odd, for this series, it works out very well.  You’ve got the serious side of nature, mixing with the Disney Magic.

Since Walt Disney World is one of the most popular theme parks in the world, this series will no doubt appeal to a large audience, especially for those who have visited the parks and will want to know a little more about the animals they’ve seen.

I really liked each episode focused on a few different animals, giving us some details about them, their lives and what the keepers have to do.  Sometimes it’s not always rosy, seeing a vet washing out an abscess from a Manatee was rather disgusting, but strangely satisfying!

While the bigger animals got plenty of attention, I’m glad we got to see more of lesser-known animals throughout the series.

My only issue with this series is the narration by Josh Gad, since his voice just keeps reminding me of Frozen’s Olaf and comes across a little too childish.  This seems like a constant issue with Disney’s animal documentaries, using well-known actors instead of narrators who could offer a more natural voice.  I personally would have preferred a more adult tone, than what’s in this series, but the show is nowhere near the same level as we’ve seen in the DisneyNature documentaries.    However, this doesn’t really distract too much from my enjoyment of the show.

“Magic Of Disney’s Animal Kingdom” is a great documentary series, if you love the Animal Kingdom theme park, you should enjoy this show.  It’s not breaking any new ground, since it’s almost identical to “Secrets Of The Zoo”, but it makes much more sense for Nat Geo to make a show about the zoo, on a show the larger corporation owns.

With a wide variety of different animals to showcase and a team of talented people on hand to show you through the daily process of looking after the animals, this series delivered exactly what I was looking for and I hope we will see more it in the future.