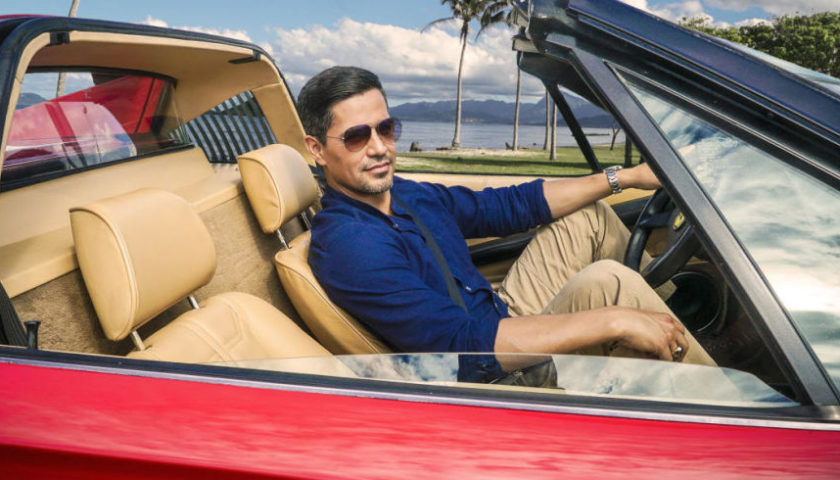 Review: For the millennial-minded among you, Magnum P.I. was a drama series that ran from 1980-1988 on CBS and was Tom Selleck’s big acting break (though it did cost him the role of Indiana Jones). Selleck starred as Thomas Magnum, a private investigator who lives a luxurious life in Oahu, Hawaii while solving the cases he wants to solve.

In this reboot series, the eponymous character, Thomas Magnum, will be played by Jay Hernandez (Suicide Squad, The Expanse). The project comes from CBS’s rebooting wunderkind, Peter Lenkov who has already successfully updated older intellectual properties like Hawaii Five-O and MacGyver.

Ken Jeong will join up, set to play Lee Ji-Won, a poker buddy of Magnum and a private eye in his own right, though with a different approach that’s earned him a seedy reputation. Jeong is coming off this past week’s box office-topper, Crazy Rich Asians, also known from TV runs on Dr. Ken and Community, as well as films such as The Hangover Trilogy and Transformers: Dark of the Moon.

Carl Weathers will play Dan, a retired Marine who’s bringing in paydays as a fisherman. Dan will enlist the services of Magnum to help him find a most crucial quarry in a stolen 350-pound tuna that’s worth about $350,000. Weathers is, of course, best known as Apollo Creed in the Rocky films, Action Jackson and as one half of an epic handshake in Predator. He recently fielded TV runs on Chicago Justice (and its “Chicago” branded sister shows) and Colony.

BS has released the first Magnum P.I. trailer! Yet, the clip’s classification as a “first look” is probably more accurate, since this preview clip is loaded with info, giving us biographical information about each main cast character and plenty of plot details.

While the action appears appropriately intense and the cast chemistry seems to be promising, the trailer concludes with a sight that will make fans of Magnum’s classic Ferrari cringe in terror.

With the series announcement set back in May, CBS revealed the first official photo of Hernandez in full Magnum mode. While minus the iconic Selleck stache, Hawaiian shirt, or Detroit Tigers cap, there is one unmistakably Magnum element here, since he’s in the driver’s seat of his red Ferrari 308 GTS.

Perdita Weeks (Ready Player One, Penny Dreadful) will be Hernandez’s co-star in the gender-swapped role of Juliet Higgins. (Jonathan Higgins in the original series.) In the reboot, Juliet Higgins is a property manager of the Hawaiian estate where Thomas Magnum provides security and lives in the guest house. She is described as “commanding, confident, and tough, who uses sarcasm to deflect emotion and is hard to get to know.” Additionally, this new version of Higgins is an ex-MI:6 agent, which actually makes a great deal of sense given the original’s odd-couple pairing.

The Magnum P.I. reboot will feature many of the same elements with some twists. In the upcoming Lenkov version, Thomas Magnum is an ex-Navy SEAL who returns home from Afghanistan and uses his military experience to begin a private investigation business.

It remains to be seen just how successful the Magnum P.I. franchise can be without the original Magnum, himself. Selleck’s endless charm was kind of the whole deal for the original series. Selleck is currently an actor and producer on CBS’ Blue Bloods and reportedly declined to be involved with the upcoming reboot but gave it his “blessing.” Still, it’s going to require a lot more than that to find a lead actor with the charisma to carry this thing.

If any of this sounds familiar, it might be because there was a Magnum P.I. sequel in the works at ABC, which would star Magnum’s daughter. It’s not currently clear if that is still happening, but considering there has been no word on that other project in the last two years, it might not be.