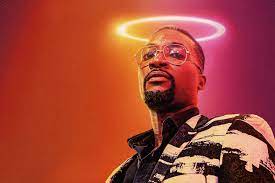 Young Sam (Nifemi Lawal) watches, bored, as his father, the Prophet Josiah Obalolu (Jude Chukwuma). Perhaps the kid doesn’t find much spiritual traction in his dad’s sermon: “Let the airplane of our enemy crash into the sea, in Jesus’ name!” he bellows. Yikes! Sam sneaks out, and pays the price – his old man beats him with a belt. The scene occurs repeatedly throughout Sam’s childhood, his father wailing on him, his mother comforting her child but doing nothing to stop the violence, Sam vowing to leave and never return.

Which is exactly what he does. Several years later, Sam (Nnani) leads a scorching-hot Afro-jazz group while attending the University of Lagos. He hasn’t spoken to his family in three years, and never replies to his mother’s letters. He smokes. He drinks. He (gulp) has sex with women, three of whom play key roles in his life: Rekya (Dorcas Shola Fapson), a dancer in his group, is his sort-of girlfriend; it’s complicated, but at least the open-door vibe appears to be mutual. His relationship with Teju (Osas Ighodaro) is platonic, even though she has romantic interests; she assists him with his studies and tries to get him to attend Christian fellowship meetings with her. Through Teju, Sam meets Joy (Atlanta Bridget Johnson), and we immediately hear heavenly piano music, implying that she’s The One, perhaps sent by God himself, because she’s also a music lover and, most importantly, the only one who successfully encourages him to join the fellowship.

Much to Teju’s despair, Sam pursues a relationship with Joy, who maybe almost gets over his bad-boy reputation for a while, until her pastor labels him a cad who plays, sigh, “the devil’s music.” Meanwhile, Rekya drops out of university, dealing drugs for fast, easy money; she shows Sam her swank new apartment and encourages him to live the high life with her. He declines, pinning his hopes to Joy, who leaves for several months on a service trip. Her communication becomes sporadic, and his worst fears are realized – she went off and married someone else. Years go by. Sam and Teju marry and start their own ministry, which takes off like a rocket. They enjoy a swank home, cars, money. Maybe it has something to do with Rekya – Sam’s sleeping with her on the side, and her dirty money is funding the ministry. And Sam still dreams of Joy of the Heavenly Piano Music. So much time has passed, and Sam remains wayward. Will he find the straight path? And where will it lead? You have three guesses (and the first two don’t count).

Man of God sprawls across decades of its protagonist’s life, yet curiously struggles to remain dramatically compelling for its overlong 111-minute run time. It’s a high-and-low-points-only saga saddled with too many big timeline leaps requiring explanation via awkward exposition-laden dialogue. Such narrative obstructions rarely allow the cast to settle into their characters and find nuance in their interactions; the film shows signs of life in a few earnest moments when the screenplay gets out of their way and allows them to speak like real people sharing the content of their hearts. But such moments are few and far between. It would be charitable to say the scattered collection of scenes comprising the story reflects the messiness of life, but it’s hard to adhere to such an assertion when the film is less like life, more like a manufactured, overly melodramatic facsimile of such.

More troublesome is the way the film treats its female characters as little more than plot catalysts for its male protagonist, who walks a long and winding life-path but whose destiny is never in question. It also fails to reconcile the problematic nature of the Prophet Josiah – who, remember, preaches violence (he prays for plane crashes!) and savagely beats his son – as Sam inevitably makes his way back home, into the judgmental arms of God. If only Sam had accepted his father’s abuse and remained home, he’d never have experienced the joys and failures of modern life, the things that make us human. I’ll say it again: Yikes.

Perhaps the film’s portrayal of church leaders as cruel, supercilious ethicists intends to reflect the complexities of personalities within the religion – but in its final scenes, it sure seems to be underscoring rigid and conservative assertions about conformity and blind dogma. The cruel people condemning other people’s life choices? I think they’re the moral signposts here. You know how so many movies bear messages about following your heart and embracing the unique person that you are? This is not one of those movies.