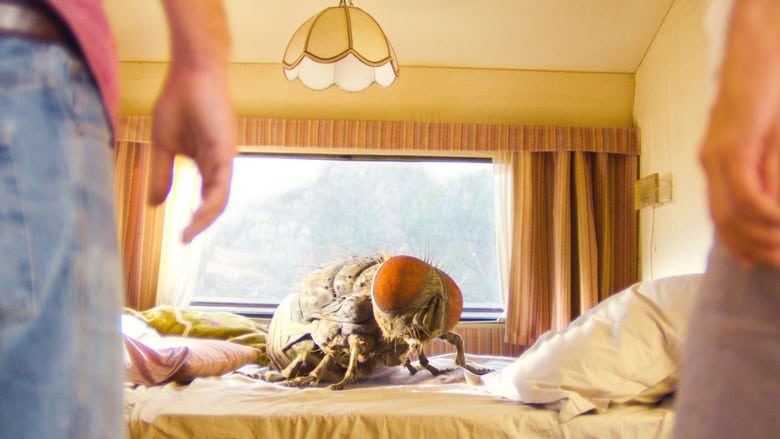 The first time I saw Rubber, I hated it. The whole ” No reason ” philosophy didn’t click at all with me. But it really sums up well Quentin Dupieux filmmaking process. And now, even though I’m still not a fan of Rubber for a number of reasons, I do embrace this philosophy and I care about every new Dupieux film since Réalité.

In each movie I saw from him, there is a insane idea, presented from the start, that draws you in and make you want to see more. Rubber’s protagonist (a killer tire), Réalité and the quest for the greatest scream ever, Le Daim and the 100% deerskin jacket that drives the protagonist crazy. Au poste! Didn’t have this one central idea but it still felt like a Dupieux movie, full of absurdities and with its own very strange universe.

So, I still haven’t mentioned Mandibules since the start of this review, why ? Because I think this movie doesn’t feel like it was made by Quentin Dupieux at all.

Yeah the giant fly seems quite insane on the paper, but its role in the film is really limited and gimmicky ; the movie could have been more or less the same without it, which is impossible to say about Rubber’s tire or le Daim’s jacket for instance.

What about the actors ? They aren’t bad, I do like the main duo, but it feels pretty forced and unnatural at times, it isn’t as flawless as the others I nammed earlier.

The movie is a bit absurd, a bit dumb in a funny way, but it is far away from what Dupieux usually makes. Through Mandibules I never thought once ” WTF is this, WTF am I watching ” which always happens multiple times with every other Dupieux movie. Mandibules felt like any forgettable comedy made by any random director.

Maybe he was tired (haha) to make niche movies and decided to remove this usual absurdity and madness to make it more accessible and conventionnal. And it seems, in France at least, the box-office tells us he was right to do so, sadly.