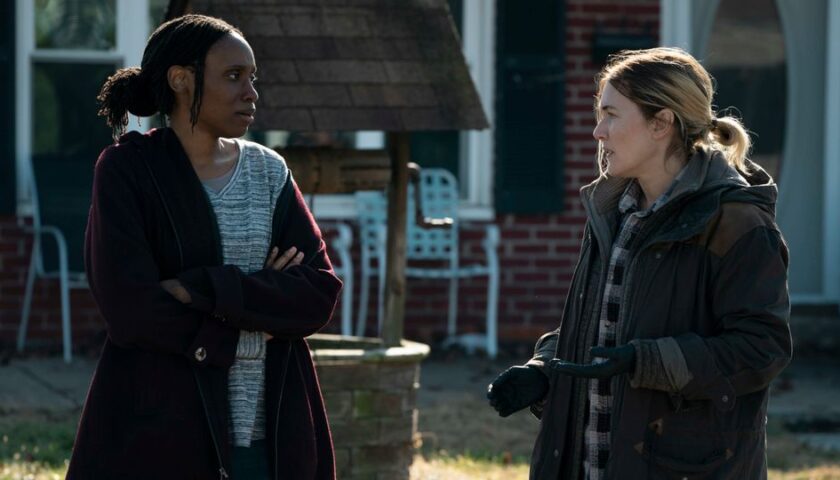 Kate Winslet stars as a detective who becomes swallowed up by the dysfunctions of her small town in HBO’s murder-mystery limited series.

In Easttown, Pennsylvania — the kind of place where most everybody is on a first-name basis with everybody else — the young women keep disappearing. The familiarity among the grimacing residents isn’t reliably, or even often, friendly; if someone knows the tragedies you’ve been through, they’re as likely to throw them in your face on a bad day or find a way to exploit them as they are to sympathize with you. That’s a lesson that Dawn Bailey (Enid Graham), the cancer-stricken mother of a missing girl, learns the hard way. After she goes on local TV to lambaste the town’s cops for failing to find her daughter when she vanished some years ago, Dawn receives calls from a stranger demanding a king’s ransom for Katie’s whereabouts — a transparent bid at a shakedown only she can’t see.

Sometimes the young women return. But more often than not, they stay disappeared, leaving behind mourning mothers, broken families, confused young children and a town full of questions and anger. Those who can leave have already left, or are planning to do so. What remains is a place that’s being robbed of its future, its number of mothers dwindling, their offspring orphaned or cared for by those exhausted by grief.

HBO’s Mare of Easttown is as much a portrait of a town as it is a crime drama. Starring Kate Winslet as detective Mare Sheehan, the seven-part limited series acutely recalls Happy Valley, Sally Wainwright’s (far superior) BBC/Netflix show about a middle-aged female cop who often seems to be the only person holding together her drug-ravaged working-class town, even as its dysfunctions follow her home. Like Sarah Lancashire’s Catherine Cawood on Happy Valley, Mare took on the responsibility of bringing up her toddler grandson, Drew (Izzy King) — in his unfortunate case, after his parents became mired in addiction. Helping the overextended Mare raise Drew and her remaining child, college-bound Siobhan (Angourie Rice), is Mare’s mom Helen (Jean Smart in a fright wig), who naturally gets under her daughter’s skin like no one else.

Mare of Easttown is most compelling when it sticks to the Happy Valley model of illustrating how its titular character is both a product of and an outlier in her hometown — and noticeably flags when it hews closer to tropes like the love triangle that ensnares its female protagonist between two thinly sketched, relentlessly devoted men (Guy Pearce and Evan Peters). All episodes are penned by The Way Back screenwriter Brad Ingelsby, who grew up in a small town close to the real-life Easttown, PA, and helmed by The Hunt and Z for Zachariah director Craig Zobel.

Disappointingly, the slice-of-life quality that so distinguishes the series — and forces Mare into uncomfortable situations with neighbors or ex-classmates she’s clearly known for years — slowly dissipates as the story progresses. The more we learn about the young women who disappear, the more relatable they are — making one terrifying but one-dimensional villain, introduced midway through the season, feel imported from an entirely different show. And at least in the installments sent to critics for review (HBO sent five), Ingelsby gradually reveals a pile-up of devastations in Mare’s life that verges on tragedy porn. The line between grittiness and farce can be fine, and it’s not clear that Ingelsby has a firm grip on its location.

Ingelsby and Zobel are much better at detailing the dynamics among the townspeople than within Mare’s family, even if the duo are also off-puttingly gawping at the junk-food diets of the Easttown residents. Smart is wasted as the trash-talking grandma, with the mother-daughter relationship between Mare and Helen — especially compared to Catherine’s delectably prickly relationship with her addict sister (Siobhan Finnegan) on Happy Valley — appealingly snappish but lacking definition. Detours into the lives of Easttown’s more privileged teens were surely intended to serve as tonal and sociological contrasts, but simply end up feeling unnecessary. Mare herself abuses her police powers in an early incident that renders her almost impossible to root for as a law-enforcement officer, even as a deeply flawed antiheroine. It’s hard to get lost in something that inspires such frequent interruptions in our suspension of disbelief.

And yet Ingelsby and Zobel eventually manage to cast their spell through masterful cliffhangers and jolting twists, one of which made me actually jump in my chair. Winslet doesn’t quite disappear into the role — her English accent pokes through too often for that — but she serves as a sturdy, no-nonsense anchor for the series amid several missing-persons cases and a cast of dozens, including Julianne Nicholson as Mare’s best friend Lori and David Denman as the detective’s mercurial ex-husband Mark. For all its unevenness, Mare of Easttown’s strengths carry it through its many muddles.