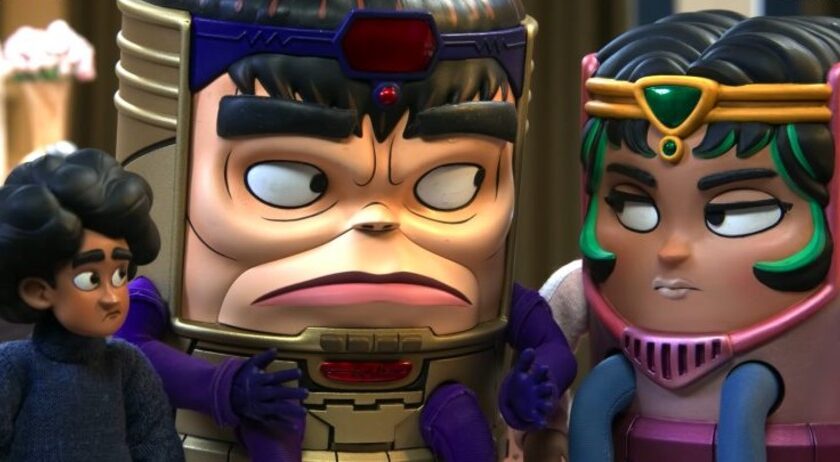 The latest big Marvel show on Disney+ or tackling the umpteenth incarnation of Batman for the big screen might get the headlines, but when it comes to the superhero genre, the real fun seems to be in poking around the creative fringes of the comic book universe. That’s where Marvel found Guardians of the Galaxy and — even if several of its main characters are at least A-list-adjacent — it’s where most of the best moments in DC Universe/HBO Max’s superb Harley Quinn originated.

That place just on the outskirts of the mainstream has yielded Hulu’s new animated comedy Marvel’s MODOK, a 10-episode series that very much wants to be similar to Harley Quinn in its embrace of quirky, cartoonish, oddly relatable villainy. On a moment-for-moment, joke-for-joke basis, MODOK sometimes comes close to comparable impact, though it fails to find the same emotional core, despite some effort.

As comic fans know, MODOK stands for Mental Organism Designed Only for Killing: He’s the alter ego of George Tarleton, whose scientific experimentation on himself leads to an overdeveloped head and brain, but an underdeveloped body that he encases in a hoverchair in his quest for world domination.

Here, series creators Jordan Blum and Patton Oswalt have somewhat reconceived MODOK (Oswalt) as a bullied, big-headed boy who grows into a semi-brilliant scientist and founder of AIM — Advanced Idea Mechanics — a struggling company still bent on world domination. By day, MODOK is fighting the likes of Iron Man (Jon Hamm) — the only Avenger whose name Marvel has relinquished for this venture — but at night he goes home to his disintegrating suburban family. Wife Jodie (Aimee Garcia) is an aspiring lifestyle guru beginning to wonder if her own lifestyle could use a little less MODOK. Daughter Melissa (Melissa Fumero) is a big-headed chip off the MODOK block, resenting her father yet channeling similar dark instincts as a high-school mean girl. And then there’s son Lou (Ben Schwartz), highly energetic and highly normal, at least insofar as he’s more interested in magic and preparing for his bar mitzvah than global domination.

MODOK is plagued by a disintegrating marriage and by a corporate takeover that leaves AIM under the control of the presumably evil GRUMBL, embodied by smarmy millennial Austin Van Der Sleet (Beck Bennett). How’s your midlife crisis going?

The expressive and colorful blend of stop-motion puppetry and computer augmentation will be familiar to any fans of Robot Chicken, and it isn’t at all surprising that MODOK also hails from Stoopid Buddy Stoodios. The rapid-fire punchlines and proliferation of pause-or-miss-them background Easter eggs have that feeling as well, so if maybe Marvel’s MODOK falls short of Harley Quinn territory and lands smack-dab in the middle of Robot Chicken country, that’ll be more than enough to guarantee a devoted fandom.

The generational slant to the humor is definitely in the same vein, as references to Finding Forrester and Soundgarden fly by, while there’s a whole episode dedicated to the musical legacy of Third Eye Blind (which Hulu has already spoiled in trailers). In fact, it has to be said as a warning that most of the best jokes from the first episode or two have already been featured in the promotion.

What hasn’t been exposed quite as much in teasers is how committed Marvel’s MODOK is to mining the dark underbelly of the comic giant’s intellectual property. Blum and Oswalt’s geeky enthusiasm for this literary universe is all over every frame of MODOK. No matter how ridiculous a supporting character or planetary reference here might seem, there’s probably a 99 percent chance it’s a legitimate thing that existed at some point in a Marvel comic, from the hedonistic snail creatures called Ciegrimites to a motley crew of seventh-tier bad guys voiced by the likes of Bill Hader and Whoopi Goldberg. It’s nearly as entertaining to go to a Marvel Wiki to try making sense of some of these references as it is to see how they’re used in Marvel’s MODOK, which is at least a minor problem.

The biggest piece of why Harley Quinn works as well as it does is that the love story between Harley and Poison Ivy, or even the friendship that leads up to it, is a serious core around which all sorts of nuttiness can proliferate. The dysfunction in the Tarleton family is familiar without generating the same empathy or heart for the series. You see glimpses of it in MODOK and Melissa’s father-daughter tensions in an episode set at an island corporate retreat and later in an amusingly chaotic episode built around robo-doppelgangers to the main characters. But it’s hard to sufficiently invest in whether MODOK reconciles with Jodie, much less whether he regains control over AIM. The Robot Chicken style and its comic cadences haven’t really been used for narrative continuity before and these 10 episodes play better in vignettes and cutaways than as serialized dramedy.

What pathos the series develops comes mostly from Oswalt, no stranger to wringing vainglorious laughs and operatic swells of humanity from characters whose lifetimes of being overlooked have turned into something psychopathic. His exasperation finds its best foils in the likes of Jon Daly, as a sophisticated and sentient robot being used as a household appliance; Sam Richardson, as a loyal henchman who just wants MODOK to restore the arm he sliced off; and veteran vocal hams like, well, Hamm and Nathan Fillion, making an amusing one-off as Wonder Man. Bonus vocal points to Schwartz, who sings a Hebrew duet with himself in the first-season finale.

The voices and pell-mell references are the biggest reason why a 10-episode weekend binge of Marvel’s MODOK amounted to such easy, quickly digested entertainment. Whether or not you think the series wants to amount to more than that — and I feel like it really does, and perhaps someday could — depends on you