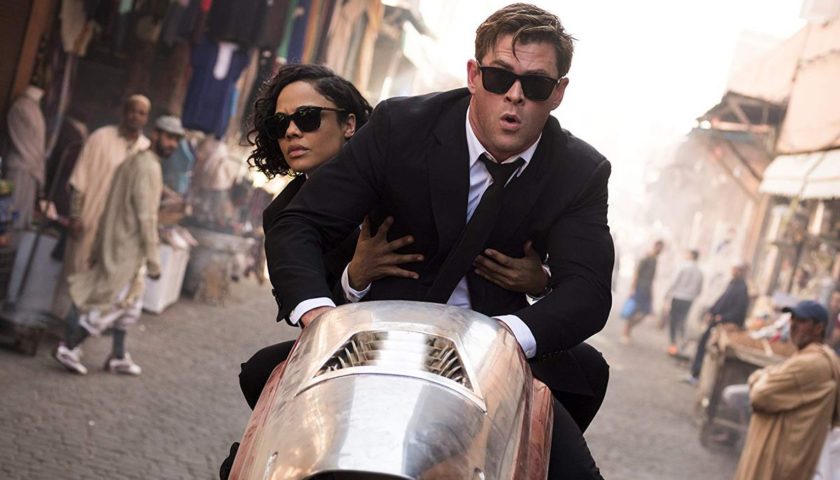 Review: It’s been almost 22 years since the original “Men in Black” movie hit, which is roughly the amount of time a young woman named Molly has spent wanting to be part of the super-secret alien-wrangling agency that Will Smith and Tommy Lee Jones have so ably represented until now. Molly was just a child when she had her first close encounter of the third kind, and though the black-suited, sunglasses-at-night G-men who showed up may have erased her parents’ memories, they didn’t wipe Molly’s brain, which has left room to ask: Where can she sign up? And what role is there for a woman among the Men in Black?

Turns out the second question was answered in 2012’s “MIB3,” when Emma Thompson took over for Rip Torn as the crypto-cratic org’s no-nonsense overseer (and before that, by Linda Fiorentino’s presence in the original). And now, rising star Tessa Thompson sets out to address the first, donning the signature uniform — snug Paul Smith suit, white shirt, skinny black tie — and waltzing through the front door of the off-the-grid agency to volunteer her services. More reboot than sequel, and less coherent or polished than the sci-fi trilogy that preceded it, “Men in Black: International” doesn’t make a big deal of the fact that its new recruit isn’t a man, but the significance won’t be lost on those who, when asked by kindergarten teachers what they want to be when they grow up, responded with traditionally male jobs: policeman, spaceman, president of the United States.

Gender labels aside, the new installment — directed by “The Fate of the Furious” helmer F. Gary Gray — has the tricky task of introducing a pair of new lead actors to a franchise that depended so much on the dynamic between wild card Smith and surly straight man Jones. It helps that Thompson and co-star Chris Hemsworth already established a kind of playfully combative dynamic in “Thor: Ragnarok” upon which it’s a pleasure to watch them build here.

If Thompson’s Molly is the “probe” — or probationary recruit — then Hemsworth embodies the cocky old pro who saved the world once alongside London division boss High T (Liam Neeson) “with nothing but their wits and series-70 atomizers.” A version of that scene opens the film, ending abruptly before the alleged world-saving occurs — the movie’s clumsy way of cueing audiences that fresh blood matters when the agency’s most celebrated heroes could be compromised.

The fun is slow to kick in here, as “Iron Man” screenwriters Matt Holloway and Art Marcum follow Molly, rechristened “M” during a training sequence that feels more like a makeover montage for the property’s various fashion partners. It’s not until a few scenes later, when M and Hemsworth’s Agent H meet, that the movie really starts to get entertaining. The duo share a special kind of chemistry, like a cross between screwball comedy repartee and sibling rivalry, where Thompson (who’s roughly the same age as Hemsworth) assumes the role of trying to impress — and potential surpass — her more experienced co-star.

Director Gray doesn’t have Barry Sonnenfeld’s skill for juggling live-action and visual effects, which leaves the actors looking awkward as they react to computer-generated aliens that never convincingly appear to share their reality — a not-insignificant problem in a film shot largely on greenscreen and clumsily composited in post, such that everything from wide-open deserts to extraterrestrial-crowded nightclubs looks like it’s being rear-projected behind stars who never left the stages of Leavesden Studios. Scenes set on the inexplicably empty streets of Paris and London feel phony, while others crowded with people feel awkward, as the extras don’t know how to behave. (A crucial conversation at MIB headquarters features what appears to be the same out-of-focus background actor randomly climbing the stairs over M and H’s shoulders.)

In terms of basic execution, “Men in Black: International” is a mess, and if the film were being graded purely for technique, it barely passes muster (inserts, flashbacks and loose ends belie last-minute accommodations to baffled test-screening audiences). The plot involves an alien VIP, Jababian party animal Vungus the Ugly (Kayvan Novak), who holds the key to the most destructive weapon ever made: a blaster cannon powered by a super-compressed star stored in a tiny purple crystal. H and M are entrusted with protecting him but are no match for a shape-shifting, break-dancing entity played by “the Twins,” Laurent and Larry Bourgeois — reminiscent of the albino duo in the “Matrix” sequels.

After failing to protect Vungus, H and M go to Marrakech for some reason, where rival Agent C (an off-puttingly priggish Rafe Spall) starts to meddle with their investigation, while they adopt the last survivor of a tiny society of cute anthropomorphic chess pieces, named Pawny (voiced by Kumail Nanjiani). Though posters for the film suggest significant screen time for Frank the Pug and the Worms — favorites from earlier installments — those creatures barely feature, whereas Pawny emerges as the duo’s new nonhuman companion. Nanjiani makes the character amusing, delivering a disproportionately high number of the film’s funniest lines, although his presence skews the entire experience younger, reinforcing the idea that “Men in Black: International” was intended for audiences who are aware of the franchise but may not be old enough to have seen any of the previous films.

Certainly, these are the viewers who will be most easily amused by a series of painfully obvious twists and reversals crammed into the last reel, as the key characters gather for the finale at the Eiffel Tower — where we’re told most of the aliens now living among us first made entry to our planet. By this point, the thermonuclear connection between Thompson and Hemsworth is what saves the day, more than anything their characters do.

As he proved in 2016’s “Ghostbusters” reboot, Hemsworth has a natural comic talent that’s been under-exploited in most of his work — although his recent Marvel projects have picked up on that gift, pairing him with actors with whom he can spar. Meanwhile, Thompson’s star has been quick to rise, and the most satisfying thing about this outlandish extension of the MIB series comes from watching her step up to the challenge of co-headlining a blockbuster. The results may be uneven, unlikely to match the commercial heights of the earlier films, but H and M have kicked open the door to future fun from the Men — and Women — in Black.