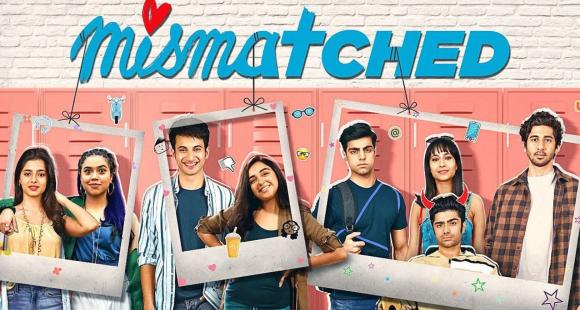 There is a certain convenience to the storytelling in Mismatched, Netflix India’s new young adult rom-com series, that makes teenage adolescence look like a statement, and not a stage of life.

There could be a drinking game made out of the number of times characters address each other as “bro” in the very first episode. The Jaipur summer college that forms the backdrop of the show does not have students – it has tropes. There is a bully, a fitness freak, an NRI, a social media influencer, a closeted lesbian, a hopeless romantic, a girl coder, a boomer, an unaffected professor who is too cool to be a professor, and even a girl with purple hair who is mistaken to be gay. And there is only one of each of them.

If the point was to underline the diverse personalities who come together to make up a millennial classroom, then that is clearly defeated because this is the kind of narrative decision Indian screenwriters take when they are just interested in ticking boxes. God forbid if someone told them that a classroom can have more than one person who knows how to rack up an Instagram following or the way to the gym.

Adapted from Sandhya Menon’s 2017 The New York Times bestseller When Dimple Met Rishi, the six-episode series revolves around an arranged marriage setup gone wrong. Rishi Shekhawat (a sincere Rohit Saraf) is a 17-year-old mild-mannered dilettante who falls in love at first sight with 18-year-old Dimple Ahuja (an inconsistent Prajakta Koli), when he sees her picture on a matrimonial group. Rishi seems to have no ambition of his own besides not wanting to end up divorced like his parents (there is a strange conservativeness about the series: the writers deem a long-lasting arranged marriage as the ultimate goal and divorce as a weakness), and so wanting to be set up with a stranger at the age of 18 does not come across as an outrageous proposition to him.

Dimple, on the other hand, is not as crazy about marriage as Rishi or her orthodox mother, which gives Mismatched the perfect excuse to make her out to be the classic nerdy dream girl cliche: she wears glasses, plays multiplayer video games, dreams of developing apps, and claims that Java is the only language she understands. Like every other show with a nerdy protagonist, Mismatched also keeps reminding us that Dimple is brilliant and capable but never quite lets us see any of that. If you have seen enough Hindi films headlined by the nerdy dream girl™ (think Naina in Kal Ho Na Ho), you can also guess she is that girl who falls in love because she is confident that she is not cut out for it. To make that happen, the show has Rishi enroll in the same course as Dimple so that he can get to know his “future wife.” What ensues is yet another drawn-out iteration of “Will they? Won’t they?

There is nothing wrong with a show deciding to go down a predictable route if it at least manages to sustain your interest during the journey. Mismatched, adapted for the screen by Gazal Dhaliwal, Aarsh Vora, and Sunayana Kumari, does not quite rise up to the challenge, mainly because it lacks a distinct voice. You can sense the influences from a kilometer away: Sex Education, The Edge of Seventeen, and Never Have I Ever. But the show never comes close to locating any emotional depth or narrative agility present in either of these shows. Here, characters do not converse in dialogue; they speak in status updates. (Sample a line: “I hide behind makeup and filters, and you?”). Even worse is its recreation of college life which does not go beyond the “Everyone makes mistakes at this age” line of thinking. The only aim of the show seems to be in replicating the performance of youth and after a point, the numerous detours of the plot feel too forced and banal (the disjointed, choppy editing further weighs the show down).

Co-directed by Akarsh Khurana (Karwaan) and Nipun Dharmadhikari, the filmmaking of Mismatched is not particularly ambitious either. It relies on using the voiceover as a crutch. Every episode has a character constantly reminding us how they are feeling and revealing their secrets. By having characters verbalise their feelings to the camera all the time instead of making it a part of the proceedings, Mismatched effectively commits the ultimate screenwriting sin: it tells an awful lot, but never really shows. Every moment and feeling is spoon-fed to the point of exhaustion. When Dimple goes out for dinner with her affluent classmates, she takes a look at the menu, and realises that she might not be able to afford the meal. A competent show, especially one that has already established that she belongs to a middle-class means, would have let the viewer put two and two together. In Mismatched, the camera take a close-up of Dimple’s fingers going down the prices of each of the items on the menu, and then zooming into her terrified face as well as Rishi’s panic-stricken face, to put the point across.

The lack of deftness is especially visible in how none of the plot points feel earned. When Mismatched starts out, the task at hand is for the whole class to develop an app in groups of two. The professor (Rannvijay Singh Singha plays him like a Roadies judge) announces that the winning team will be rewarded with an internship. Except the show forgets its own goal after the fourth episode, devolving into an unnecessary gaming showdown between Dimple and the token class bully (Taaruk Raina overacts with an inimitable dedication). Similarly, the writers keeps feeding us new information about its host of under-developed characters almost off-handedly (one guy is losing his hair, the sexually promiscuous girl in class has not had sex, the token NRI has a last-minute change of heart) without quite dissecting their origins or seeing them through a logical arc.

Nowhere is this more apparent than in the trainwreck that is the finale. Every conceivable conflict is crammed in the last 15 minutes of the episode for no reason other than it can be. There is a broken friendship, a terse confrontation, an unfortunate leak, an unlikely win, an unofficial breakup, and a new beginning. In fact, the cliff-hanger ending (straight out of Never Have I Ever) is a testament to how much of a wasted opportunity Mismatched really is, one that goes out of its way to squander its own potential.

Mismatched is streaming on Netflix India.