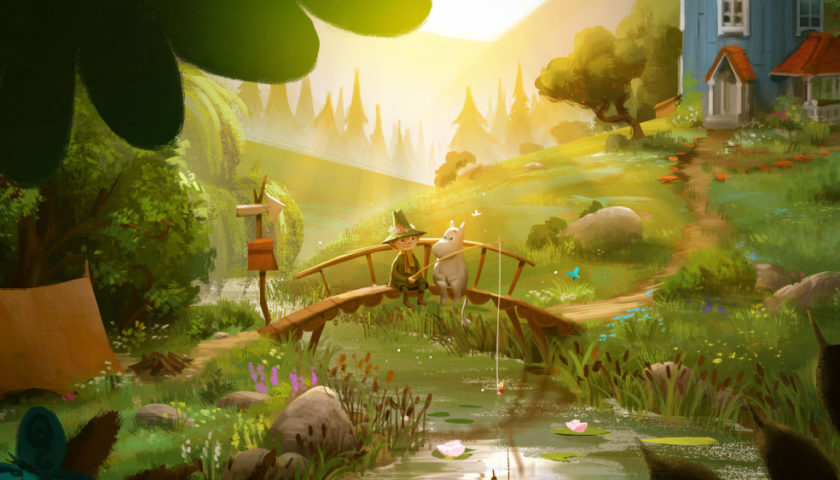 Coming from Gutsy Animations as a brand-new Sky Original Production, Moomintroll, Snufkin, Little My and all the Moomin family will return in 13 x 30-minute episodes to air on Sky 1 in 2018.

The character will also have some A-list voices behind them as Rosamund Pike (‘Gone Girl’), Kate Winslet (‘Mildred Pierce’, ‘Steve Jobs’, ‘Titanic’), Taron Egerton (‘Kingsman’, ‘The Smoke’) and Warwick Davis (‘Star Wars’, ‘Willow’) are set to voice the much-loved residents of Moominvalley. They will be joined by Bel Powley (‘Benidorm’), Edvin Endre (‘Vikings’), Joe Wilkinson (‘8 out of 10 Cats Does Countdown’), Matt Berry(‘The IT Crowd’), Akiya Henry (‘Bing’), Will Self (‘The Minor Character’) and Richard Ayoade (‘The IT Crowd’).

“Rosamund Pike, Kate Winslet and Taron Egerton coming together in one Sky One show – how amazing is that?” comments Adam MacDonald, director of Sky One who commisioned the series. “The Moomin stories are absolute classics so I can’t wait for them to hit our screens next year.”

Starring Moomintroll (Egerton) and his family and friends the series will be centred around the Moominhouse and valley, an idyllic place entirely untouched by the modern world, and will be based on Jansson’s well-known novels and comic strips. Airing exclusively on Sky and streaming service NOW TV in the UK and Ireland, the series will be full of life, laughter and adventure, with visual humour, witty dialogue and plenty of energy and drama.

“With their beguiling adventures, magical setting and a cast of fantastical creatures, Tove Jansson’s beautiful books have been a well-deserved family favourite for decades and we can’t wait to bring the joyous Moomin world to Sky families in this fabulous new series,” adds Lucy Murphy, head of kids content, Sky.

The idea for the new series comes from Finnish company Gutsy Animations after they successfully raised £200,000 through a crowdfunding campaign to make the show. Moominvalley has the full support of Moomin Characters, the business set up by Moomin creator Tove Jansson and her brother Lars in the 1950s, and Bulls Licensing, their global licensing agent. It is being developed in association with the drama department of Yle, the Finnish public broadcaster.

‘Moominvalley‘ will air on Sky One, TV streaming service NOW TV, the Sky Kids app and on-demand on Sky in late 2018.