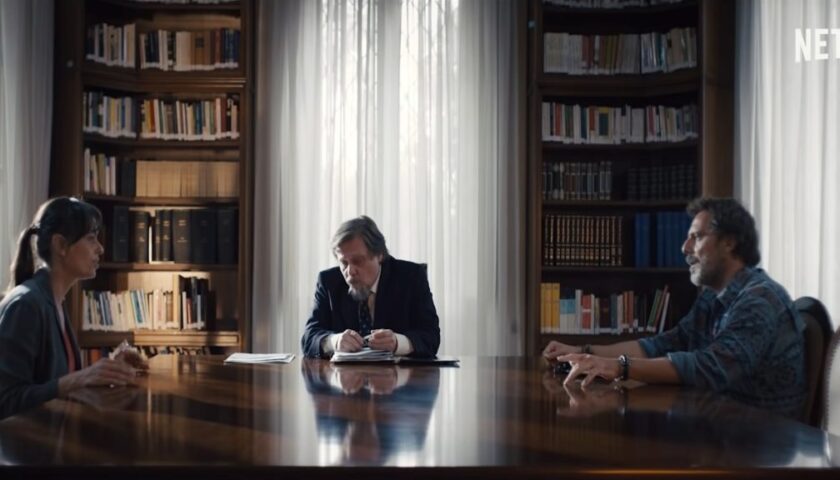 Every family has its secrets. Sometimes, these secrets become a reason for their separation. Every family feels they are perfect, but being flawed is the eternal truth. Roberto Capucci’s family drama film, My Brother, My Sister, explores this fact. The two siblings, brother, and sister try to bridge their differences to fulfill their father’s last wish. And what will be the outcome? Will they be able to fill the gap created by 20 long years? Let’s find out.

In modern-day Rome, the film begins with a funeral. A single mother, Tesla Costa (Claudia Pandolfi), arranges a church funeral for her father, Giulio. Giulio was an astrophysics teacher with two children, a daughter named Tesla and a piano prodigy son named Nikola “Nick” (Alessandro Preziosi).undisclosed reasons, Nick left the family 20 years ago and didn’t try to connect in all these years.

Nick arrives at the funeral and speaks strangely about his father. Tesla is surprised to see her estranged brother and gets hysterical. Tesla’s younger daughter, Carolina (Ludovica Martino), tries to control her anxious mother while her Schizophrenic son, Sebastiano, meets Nik. Tesla gets a panic attack and quickly leaves with her family.

Tesla doesn’t want Nik to find out about her son’s illness, so she wishes Nik would disappear as soon as possible. The family lawyer, Federico, reads Giulio’s will and informs his children that their late father has left them joint custody of their family apartment. Tesla is horrified. She can’t stand her brother, and her late father’s last wish was to share the roof with him for at least a year. However, Federico explains that the siblings are not legally bound to do that and can sell the house. However, Tesla and Nik agree to give their relationship one more chance in memory of their late father.

What lies ahead is a humorous and emotional ride under a roof. Nik tries to live his bohemian life while Tesla practices her strict routine for the sake of Sebastiano’s mental condition. Amidst the chaos, Carolina leaves the house and crashes at her friend Emma’s place. She cuts ties with her mother and starts spending her time in the “camper van” left by her grandfather. Will this dysfunctional family ever be able to bridge their differences?

Tesla hated her brother, Nik, because he just one day picked up his bag and left. Nik didn’t bother to look back or check on his father or his sister. All these years, Tesla struggled to raise the family and dedicated her life to it. But it wasn’t enough.

Tesla’s husband, Paolo, left her eight years ago and married another woman. Carolina yearned for a father and tried to connect with him, but he never replied. Some five years ago, Sebastiano was diagnosed with schizophrenia. Tesla spent a significant chunk of her life looking after her son. She never got time to move on or start a new life, but the past always pulled her back to ground zero. And Tesla, at some point, blamed Nik for running away from his family and his responsibilities. The cost Tesla had to pay in Nik’s absence.

After Nik got comfortable in the house, Tesla finally confronted Nik and asked him why he left the family 20 years ago. Nik found his future wife, Giada, in bed with another man, and the revelations crushed him. But that wasn’t all of it.

Federico gave Carolina a letter in which Giulio announced the money he owed to Nik and wrote a confession that changed everything.

According to the letter, the man Nik saw with Giada was his father, Giulio. It was the reason why Giada visited Giulio’s funeral because she had a history with him. As soon as Tesla learned the truth through the letter, she forgave Nik and reconciled her relationship with her brother. Tesla understood that Nik left the family to protect his father. He just didn’t want the family to suffer because of it.

Sebastiano, diagnosed with schizophrenia, made an imaginary friend, Kelvin. He invited Sebastiano to Mars. On earth, Sebastiano felt an absence of love and music and thus wanted to go to Mars with his classical music. A kind of escape, maybe, due to a troubled childhood and an absent father.

Nik’s presence at the house filled the void, and Sebastiano slowly became normal. He started rehearsing his violoncello and even went to the beach with Nik. However, on the beach, Nik saw his teacher, Emma, with Nik. Seb was in love with Emma and perceived that Nik was trying to steal Emma from him. Seb panicked. Tesla blamed Nik for the episode, and thus he decided to leave the house.

Even though Seb was in chaos, he decided to perform at his concert. However, as soon as he arrived on stage and saw a large crowd full of strangers, he became anxious. In fear, he ran out of the venue and met with a fatal car accident.
At the hospital, the siblings reconciled their relationship. In his conscious mind, Seb spoke to his family and made necessary amends. He specifically requested his mother to start living again. At this point, the film tried to establish that Seb might not survive, but he did.

At the end of My Brother, My Sister, the dysfunctional family came together and spread Giulio’s ashes near a beach. Sebastiano, who once told his imaginary friend Kelvin that he was afraid of water, walked straight into it and conquered his fears. Maybe, someday, he would overcome his mental illness, and his family would probably help him in his journey. The film ended on a happy note as the family embraced each other.

My Brother, My Sister is a 2021 Italian Family Drama film written and directed by Roberto Capucci. It is streaming on Netflix.