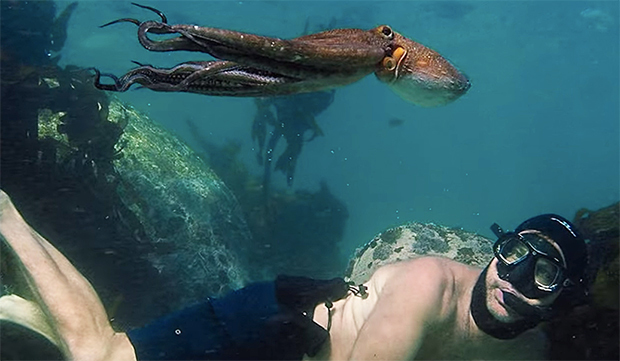 In 2010, the renowned nature filmmaker Craig Foster started free diving in the icy, brutal ocean waters off the Western Cape of South Africa. He was suffering from debilitating burnout and adrenal fatigue and was desperate for “radical change” — but unsure what shape it might come in. Then it arrived in the form of a speckled, eggplant-hued octopus. After their first encounter — both of them under the sea, she so expertly camouflaged beneath a pile of abandoned shells that even the surrounding fish were perplexed — he was so mesmerized that he resolved to visit her every day. The resulting Netflix original documentary, My Octopus Teacher, chronicles the yearlong relationship between man and cephalopod.

My Octopus Teacher could have easily joined the bloated canon of creative works by men who decide to rediscover their purpose by connecting with the rugged natural world. But it falls into no such trap. Instead, the film captures one of the most touching accounts of interspecies friendships ever to grace the world. At first, the octopus is reluctant to move about freely in Foster’s presence, but over time Foster proves himself not to be a threat. The slow acclimation process culminates in a rousing meeting where the octopus inches toward Foster and hesitantly unfolds one of her arms onto his hand, playfully latching on with her suckers. The unexpected gesture leaves Foster astonished.

Though octopi are known to be wickedly smart, the mollusks aren’t exactly well-understood. Foster is desperate to know more about the majestic creature — but he doesn’t approach her as a research subject. Rather, as the title of the documentary hints, he sees her as more of a guide or mentor, with valuable lessons to teach him about the fragility of life and the deep connection between the human and natural worlds. His reverence for the octopus and “the pure magnificence of her” suffuse all his observations, an approach that’s been met with some criticism. In one review of the documentary published in the New Scientist, journalist Elle Hunt writes that Foster’s “takeaways tend to be emotive, rather than scientific,” and gently mocks its “occasional sentimentality.”

But I’d argue that My Octopus Teacher isn’t meant to be a traditional nature documentary. I think a more fitting way to describe it is as a love story. When Foster says, “All I could do at the time was just think of her — in the water and on land.” Come on. He’s so determined to better understand her that he meticulously pores over scientific literature about the common octopus; so transfixed is he by her that he passes his days wondering if she dreams — and if so, about what? Following a dangerous encounter with a pyjama shark, Foster fastidiously tracks her recovery. He even brings his young son out to meet her.

He does all of this with the knowledge that their relationship will end tragically, as common octopi live no more than one or two years. But the inevitable pain doesn’t deter him from visiting. “There was this one incredible day,” he recalls toward the end of the film, when he found the octopus joyously flailing her arms toward a school of fish — something he initially interpreted as hunting. But after he studied her movements a little longer, he realized she wasn’t acting predatorily. Instead, she appeared to be playing. And then, in an instant, she lost interest in her game and rushed over to Foster and latched onto his chest, as though she were hugging him. Even at the end of their relationship, she maintained her ability to surprise him.

“I fell in love with her,” Foster later reflects on his fleeting time with her, “but also with that amazing wildness that she represented and how that changed me.”