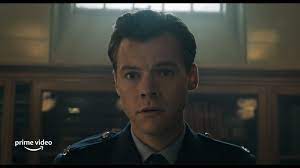 English novelist E.M. Forster never married, and why would he? The author of “Maurice” and “Howards End” was gay, reportedly maintaining relations with a much-younger police officer over the span of four decades. That man did marry, and history has it that his wife knew their secret. In “My Policeman,” this unconventional arrangement lends itself quite nicely to one of those slightly stuffy yet respectable period pieces of the kind that Ismail Merchant and James Ivory have made of Forster’s novels, jumping back and forth in time between the sexy stuff (featuring Harry Styles, fully embracing the ambiguity of his queerbaiting brand) and the maudlin way it resolves itself so many years later.

It all starts with a special delivery to a dreary seaside cottage: An invalid arrives at the house of retired policeman Tom (Linus Roache) and his schoolteacher wife Marion (Gina McKee). It was her idea to take in the unpleasant and largely uncooperative Patrick Hazelwood (Rupert Everett, all but unrecognizable), whose presence clearly annoys her husband. Tom wants nothing to do with this troublesome old acquaintance, disappearing for long walks while Marion deals with his demands.

Apart from reuniting “The Wings of the Dove” stars Everett and Roache, the contemporary framing device does little but slow down the flow of livelier — and sometimes downright hot-blooded — flashbacks, when Tom (Styles) and Marion (Emma Corrin) were first married, and they spent a lot of time hanging out with Tom’s more cultured friend Patrick (David Dawson), a museum curator and dabbling artist. Patrick looks to be about a decade older than Tom (Forster had 23 years on his beloved bobby), and though Marion’s worldly enough to sense that he might be funny that way, she doesn’t suspect her boyfriend of being his lover.

“Philadelphia” writer Ron Nyswaner’s script — which he adapted from the novel by Bethan Roberts, with Michael Grandage (“Genius”) directing — shapes this mystery somewhat strangely, since audiences presumably know this is a love-triangle intrigue going in, and Marion harbors some guilt for her role in what happened (so she mustn’t be completely oblivious), but the filmmakers still want there to be a sense of surprise and discovery as they peel the artichoke one leaf at a time. To that end, modern-day Marion gives herself permission to snoop through Patrick’s possessions, discovering old diaries that corroborate what she’s always suspected about him, including glimpses into what life was like for homosexuals at the time — meeting in clubs, hooking up in back alleys, risking arrest or assault if they’re caught.

“My Policeman” comes alive during its 1950s-set segments, focusing first on the origins of Tom and Marion’s relationship before diving even deeper into the past to reveal how Patrick got there first, hitting the deliciously innocent young cop with the line, “You know, I’m an amateur artist.” When Tom shows up a short time later to be sketched, he’s wearing his full uniform — but not for long. Patrick follows his lead (it’s Tom who makes the first move), and the ensuing sex scenes are tender yet genuine, and they don’t skimp on the nudity, which is somewhat surprising, since the film seems to have been made for audiences who identify with Marion more than either of these men.

What gives that away? Well, so much of the film is told from her point of view, and even the flashbacks — which are fleshed out (so to speak) by what she reads in Patrick’s journals — reflect the naivete with which their marriage began. At the time, Tom struck her as very shy. He’s terribly awkward and not at all enthusiastic in bed (with her). But he proposes marriage, and this feels like the life she wanted, even if it’s all a bit much when Patrick shows up during their honeymoon to cook them a meal and confront Tom in the shed. One of Marion’s friends clearly knows the score, giving the camera a conspiratorial look during the wedding (in a satisfyingly didactic scene that comes later, we learn that she’s a lesbian).

The present-day portion of “My Policeman” is all about what remains unresolved, like the movie “Atonement” with much drearier everything: The sets, costumes and so forth are all perfectly appropriate for the period, just a bit more gray and mothlike than we might want. Alas, the older actors don’t have all that much to do (editor Chris Dickens keeping cutting back to McKee reading), but the younger trio are strong, albeit restrained, in their roles. Corrin, so great as a wife betrayed in “The Crown” (they played Princess Diana), could do this role in their sleep, while Styles has the tricky task of making Tom’s betrayal feel tragic for all involved.

In the end, it’s probably for the best that Roberts decided to fictionalize everything, rather than treating this as Forster’s actual story. Doing so allows the novelist to focus on the poetry of her interpretation rather than the psychology of how relationships actually work. Whether its “Brokeback Mountain” or “My Policeman,” the trouble with straight women writing gay love stories is that they tend to conflate sex and romance — that is, they think of them as love stories — while treating bisexuality as a threat, as opposed to a liberating identity unto itself. There are a lot of people out there who have wives and children at home and lovers on the side (same-sex or otherwise), and this doesn’t necessarily mean that they’re unfulfilled. They may, in fact, be more satisfied than those in heteronormative relationships.

In “My Policeman,” Marion assumes that her husband has always preferred Patrick to herself, and that it would be an act of love on her part to reunite them. For any nonstandard arrangement to work, however, communication is key. Rather than dictating the terms in the climactic scene, she might have saved them both a lot of trouble by having a conversation. Keep the Kleenex within reach — you’ll still want it. Just know that a more meaningful version of this story would have involved less time reading alone and more talking together.