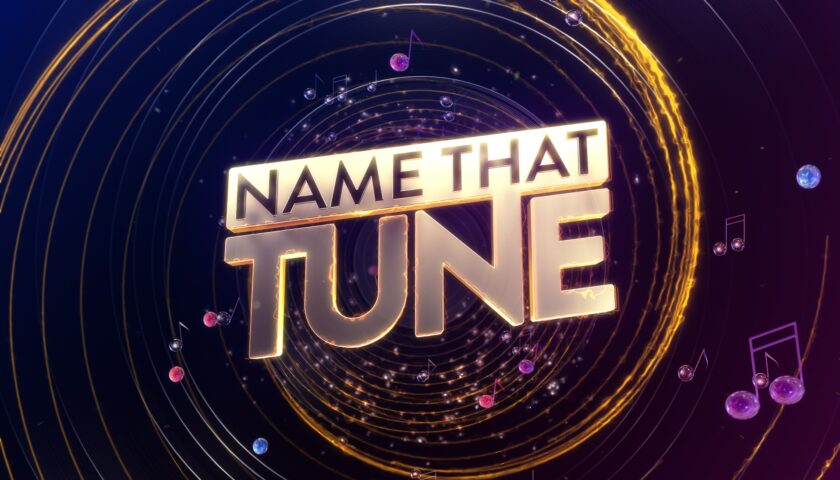 A montage of contestants during the season of the new Name That Tune. Then, as the Name That Tune Band plays, bandleader Randy Jackson introduce host Jane Krakowski.

The Gist: In the first round, the two contestants buzz in while Randy and the band play the song, based on a theme that’s determined via one of a few different games. The second round is the classic Bid-a-Note, where the contestants get a clue about a song then bid against each other to see who will guess each song in the fewest number of notes. The maximum is ten and the fewest is 1. If the winning bidder gets the song wrong, the other contestant gets the full 10 notes to make their guess. Along the way, in both rounds, the contestants are banking money; whoever wins the Bid-a-Note round gets to keep their banked cash.

In the “Golden Medley” round, the winner has 30 seconds to guess seven songs; they push their buzzer to stop time, where they can guess or pass and come back to it. The first wrong answer ends the round, but if they get all 7 in 30 seconds, the contestant wins another $100,000. If they run out of time or make a wrong guess, the contestant wins and additional $10,000 per right guess.

What Shows Will It Remind You Of? Name That Tune has had an insanely long history on TV and radio, dating back to 1952. This version feels like a cousin of the late ’70s version hosted by Tom Kennedy (where a young Kathie Lee Gifford — then Kathie Lee Johnson — had a stint as the band’s singer) or the mid-’80s version hosted by Jim Lange.

Our Take: What usually happens when there’s a modern reboot of a classic game show format is one of two things: Either the game play is changed so much that the game is rendered unrecognizable, or the game is made too easy by one minor change or another.

There is absolutely nothing wrong with the game play on this new version of Name That Tune. The band is updated to something that’s more akin to a party band than a big-band-style group previous versions had, but the games themselves are classics — if they had eliminated Bid-a-Note, then it wouldn’t be Name That Tune anymore — and the banter between Krakowski, the contestants and Jackson is natural, albeit a bit hyped up (we did love her doing a tap routine with one of the contestants who invited her to join her, even if it was a bit pre-planned).

But where the show falls down is that they make things too easy for the contestant. The clues in Bid-a-Note are especially egregious, allowing contestants to immediately bid “I can name that tune in one note” if they already know the answer. “You might say this to your taxi driver on Sunday.” Well, if you know music even a little, the words “Take Me To Church” pop in your head immediately. So if you already know the answer, and bid one note, where’s the excitement in that?

The other factor is that the money given away in the Bid-A-Note round is way too high. The values are $10,000, $15,000 and $20,000. In the first episode of the two that will air in its first hour, the winner went into the Golden Medley round with $44,000. Sure, winning another $100k is great, but $44,000 is nothing to sneeze at. It makes the pressure on the contestant in the Golden Medley round that much less. Winning $10,000 per right guess in the Golden Medley round is also a disincentive. Think about it: if you get six songs but miss the seventh, you’re still going home with $60,000 in addition to what you had going into that round. Again, nothing to sneeze at, and it certainly buffers the loss of the additional $100k.

It’s these little details that can make or break a game. If Name That Tune‘s producers can tighten some of that up, they have a fun game on their hands.