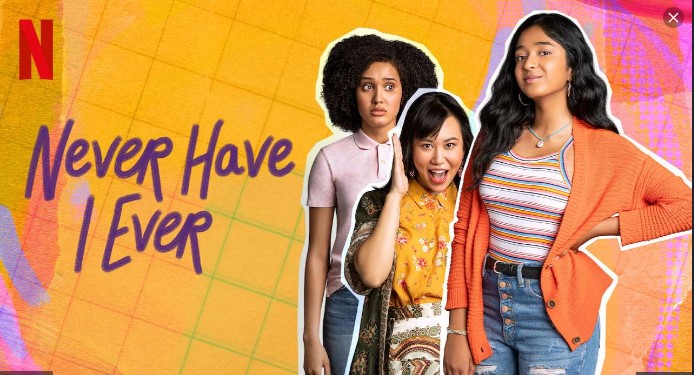 “Never Have I Ever” has a keen awareness of the teen comedies that came before it. Its plucky heroine has an overbearing mother, two meeker best friends, a nemesis, and a debilitating crush on a popular jock with a secret heart of gold. All she wants is to stride through her sophomore year of high school with more flair than she did as a freshman, have some new experiences, mess up, and most importantly, be normal. It’s a familiar formula for anyone who’s experienced even a minute of YA entertainment, but “Never Have I Ever,” created by Mindy Kaling and Lang Fisher, moves forward by twisting it into way more interesting shapes.

A huge part of the new Netflix comedy’s success is thanks to Devi (Maitreyi Ramakrishnan), its 15-year-old protagonist and the show’s magnetic center of gravity. As one white-guy college counselor tells her halfway through the season, her college essay could center on the facts of her being an Indian-American teenager whose father dropped dead in the middle of her orchestra concert, leading to a grief-stricken Devi losing the use of her legs for a solid three months. Devi and the show alike viscerally hate the idea of using her trauma for bonus points. As played with bracing confidence by Ramakrishnan (in her debut role no less), Devi is confident and funny, guarded and fearless, selfish and vulnerable. She isn’t just sad about her father dying; she’s absolutely furious. When she inevitably lashes out, she’s quick and vicious as she pinpoints her chosen enemy’s weakness and mercilessly exploits it. Devi is, as so many 15-year-old girls are, a restless storm of contradictions that doesn’t completely understand her own power even as she unleashes it. And even though Devi’s rage is one of the more fascinating things about her, it isn’t the entirety of her, either. She’s a complete teenage girl who, over 10 sharp and compact episodes, proves more than capable of anchoring her own series.

In fact, Ramakrishnan is so good in the part that the show’s baffling decision to have her life narrated by John McEnroe quickly becomes downright frustrating. McEnroe’s place in the series gets an explanation sooner rather than later, but McEnroe’s flat affect doesn’t have half the spark that Devi does. (His voiceover shortcomings become even more obvious in a later one-off episode in which Andy Samberg takes over and eclipses McEnroe by the end of his first sentence.) Devi’s story doesn’t need a gimmick like McEnroe in order to stand out.

Devi’s a worthy lead, but “Never Have I Ever” does itself a huge favor by also paying enough attention to the people in her orbit — and by letting them push back against her perception of them as her supporting cast, too. Her beautiful cousin Kamala (Richa Moorjani) does her best to stay out of the way, but still gets a substantial storyline in which she grapples with wanting to be an independent biologist and the expectation that she’ll be in an arranged marriage by the year’s end. Her mother (a wonderful Poorna Jagann athan) struggles to adjust to single parenthood while pushing her own grief further down. Her best friends Fab (Lee Rodriguez) and Eleanor (Ramona Young) have their own interests and problems, and the show gives them enough room not just to unravel them, but let Devi know when she’s sucking up too much of the oxygen. (Fab’s journey, in which she resists the fact that she’s a lesbian before learning to embrace it, is especially well done.) Even the boys in Devi’s life — overachiever Ben (Jaren Lewison) and sensitive swimmer Paxton Yoshida-Hall (Darren Barnet) — come to realize new things about themselves, too, as they get to know the hurricane that is Devi. The one real exception to the nuance rule is Devi’s therapist, which would be more glaring were she not played by Niecy Nash, one of TV’s most reliable ringers.

“Never Have I Ever” is far from the first time a Kaling production has tried to take preexisting tropes and filter them through a more unique lens (see: rom-coms “The Mindy Project” and “Four Weddings and a Funeral”). But it does feel the most immediately sure of itself and what it can offer that other shows in its genre didn’t — and/or, thanks to more monochromatic casts and perspectives, couldn’t. With enough self-awareness and empathetic acting to ground and elevate it, “Never Have I Ever” makes for a smart, refreshing, and frankly overdue change of pace.