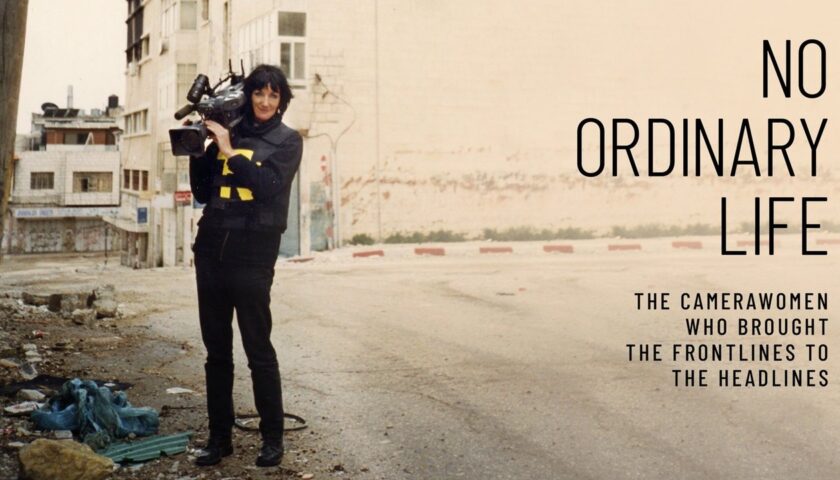 Whenever you see footage of a war or an uprising or a famine, there’s usually a correspondent on camera, providing context for the upsetting images you see. They are given a lot of credit for the work they do (as well they should: they put themselves in harm’s way over and over again to shine a light on human suffering that might otherwise go unseen.) But behind every one of those heartbreaking news segments, there’s a cameraman or, more recently, a camerawoman who is equally worthy of recognition. No Ordinary Life pays tribute to the trailblazing female photojournalists of the 1980s and 1990s, who threw themselves into a dangerous, male-dominated career no one thought they could handle and ended up bringing a unique empathy to the horrors they captured on film as part of the news of the day.

No Ordinary Life highlights the careers of five camerawomen: Mary Rogers, Cynde Strand, Margaret Moth, Maria Fleet, and Jane Evans. They all came onto the scene at roughly the same time and were all thoroughly committed to the work of documenting crises around the world, regardless of the dangers involved. Because they were all journalists, naturally, there is no end to the amount of footage showing them amidst genocide in the former Yugoslavia, open war in Lebanon, famine in Somalia, the cholera epidemic in the aftermath of the Rwandan genocide, and untold other heartbreaking tragedies. And they were utterly fearless. We watch them literally being shot at, and they remain consummate professionals throughout, bringing a tremendous sense of humanity to the stories they’re helping to tell.

At times, society has a way of framing women in professional environments as adversarial, especially when they’re taking on roles traditionally held by men. We almost can’t help pitting them against one another, imagining the all too common situation where there’s only room for one “token” woman, and only the absolute best possible woman will be capable of keeping pace with her male colleagues. So what’s surprising and really quite pleasant about No Ordinary Life is how much time it devotes to letting the women just talk about each other as human beings.

They’re incredibly warm, even effusive, in their commentary, and it’s clear throughout the overwhelming personal and professional respect they have for one another. There’s no competition here: they all seem to recognize that they were doing a difficult job in a male-dominated field, and if they didn’t look out for each other, no one else would. Hearing their personal anecdotes, the funny little quirks about each of the women that they’ve somehow managed to remember all these years later lends an extra dimension to No Ordinary Life.

It also highlights how completely apart from the rest of the world they were: this was more than just a job; it was months and years of their life where they were accumulating experiences that no one other than the handful of people they were with at the time could understand. There’s an intense bond that forms under such conditions, and that’s clear in how they all speak about their time as photojournalists and their relationships with one another. It also adds a wistful tone to the segments when they discuss why they eventually moved on from this role: it’s not a matter of switching from the field to the studio but becoming acclimated to an entirely different way of life.

That said, No Ordinary Life has its shortcomings, not in terms of its content, but in how it’s all put together. It has a very formulaic structure to its storytelling that saps it of some of its emotional energy. No Ordinary Life is rather short, but it feels almost dragged out in places because of this repetition. At times, it seems like it’s barely scratching the surface of the lives of these extraordinary women. Strangely, if it had been less committed to having a short runtime, it might have flowed better, creating space for the filmmakers to delve more deeply into their individual stories with greater variation between the different subjects. The archival footage from their time in the field is moving because of how well shot it is and how keenly it captures the despair of crisis, but it isn’t used particularly effectively in No Ordinary Life. There are a few brief moments when they discuss the unique qualities each of the different camerawomen brought to their work. It would have been lovely to see this expanded upon and given more room to breathe. That said, No Ordinary Life is a fascinating piece of history, one that is so rarely thought about, and the generosity of spirit that exists between all of the subjects makes it a delight to watch.