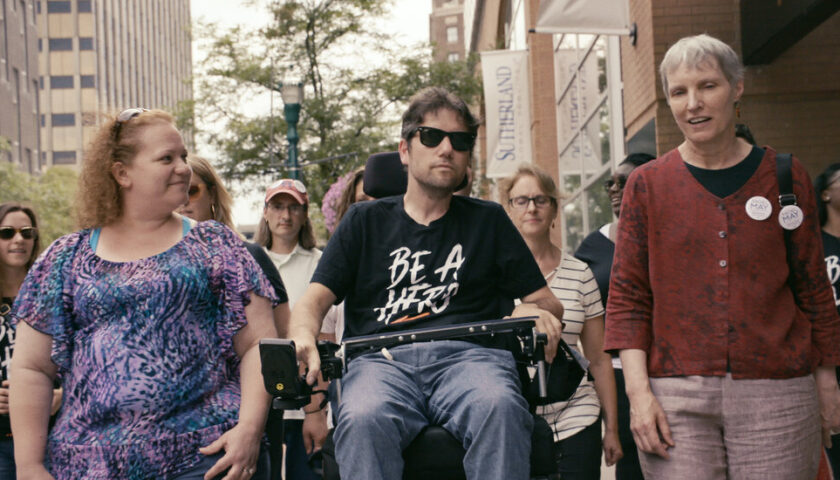 A tireless advocate for progressive social justice causes, attorney Ady Barkan got diagnosed with terminal ALS in 2016. It was only a matter of time that the regular motor functions and vocal abilities of the energetic Santa Barbara resident — an adoring husband to his wife Rachael and the brand-new father of baby Carl — would begin to deteriorate. The 32-year-old Barkan obviously knew that he was dying, with only a handful of years left to live based on his doctors’ estimations. But in Nicholas Bruckman’s compassionate “Not Going Quietly,” a clearsighted and traditionally inspirational documentary portrait of Barkan’s rise to prominence in the healthcare debate, Barkan rightfully indicates that dealing with insurance then was far worse than this harrowing awareness. Simply put, he needed a breathing machine to stay alive, but his insurance company refused to pay for it, flagging the device as “experimental.”

Shortly after, Barkan and his family witnessed Trump become the next president of the United States, threatening to impair the country’s already unfair medical system. Most people in Barkan’s situation would have been overtaken by a gloomier state of mind. But the high-spirited activist, whose sharp sense of humor and can-do temperament we get to know deeply throughout “Not Going Quietly,” didn’t surrender to doom and gloom (even if he declared that the country would be “totally fucked” under the new administration). Instead, he repurposed his personal ailment and took his cause on the road against the odds, launching a political fight against Trump’s proposed tax model that didn’t have room for healthcare basics like Medicare that most Americans rely on.

The film is chock-full of uplifting and truly energizing instances where Barkan and a group of equally driven activists demand change under their “Be A Hero” PAC banner, challenging politicians face to face and lending an enabling hand to their fellow citizens burdened with myriad injustices. With a name that emanates a positive, empowering ring very much reminiscent of Barkan’s disposition and attitude as an activist, “Be a Hero” was born when Barkan confronted the then Arizona Senator Jeff Flake on a plane, asking him to be a hero and oppose Trump’s tax bill. Filmed by Barkan’s fellow activist Liz Jaff, the powerful occurrence went viral (who could ever forget the #FlakesOnAPlane hashtag), cementing Barkan’s nationwide fame as an influential liberal overnight.

That well-deserved reputation eventually landed him a spot in Time Magazine’s “100 Most Influential People of 2020” list and “Not Going Quietly” chronicles how Barkan achieved that distinction in the years prior, earning acclaim from the likes of Alexandria Ocasio-Cortez and securing time with leading Democratic candidates in the presidential race, including Kamala Harris and Bernie Sanders. Barkan was out there on the road leading up to the 2018 midterm elections that flipped the house in favor of Democrats, traveling with a band of likeminded progressives in an RV, offering free training on a process called bird-dogging — basically, a method that teaches civilian liberals how not to bow down to manipulative partisan language. He was also present when “Be a Hero” went after the issue of Brett Kavanaugh’s Supreme Court nomination, a battle that couldn’t be won despite Christine Blasey Ford’s testimony against Kavanaugh with claims of past sexual misconduct.

Along with his editor Kent Bassett, Bruckman weaves these events together rather conventionally yet thoughtfully, making plenty of room for Barkan’s home life and appealingly chipper character that he somehow manages to maintain through all his battles. But that doesn’t mean the taxing demands of fighting for justice don’t take their toll on Barkan. On one hand, we witness the joyous growth of his family with a new baby. On the other, we watch as Barkan rapidly and soul-crushingly loses his voice and bodily functions, generating speech through a machine that recognizes his eye movements.

While it’s heartbreaking to see him break down in tears in front the camera, it’s through raw moments like this that Bruckman manages to humanely anchor his film in reality. One wishes he also kept a close eye on Rachael, a professor and author, in addition to being Barkan’s chief ally and enabler. It’s impossible not to see the deep, passionate love between the couple. But the film doesn’t allow the often sunny Rachael enough instances where we really get to know her or hear her side of the struggles. In an otherwise generously attentive film, this omission feels puzzlingly uncharitable.

Still, “Not Going Quietly” brings home the meaning of its title near the finale, with Barkan’s political address to a committee about “Medicare for All.” Many in the chamber can’t hold back their tears, listening to the activist’s stirring words through his machine’s robotic sound system. It’s a profound moment, one that should remind any average American the power of their own voice in tackling inequalities and igniting change.