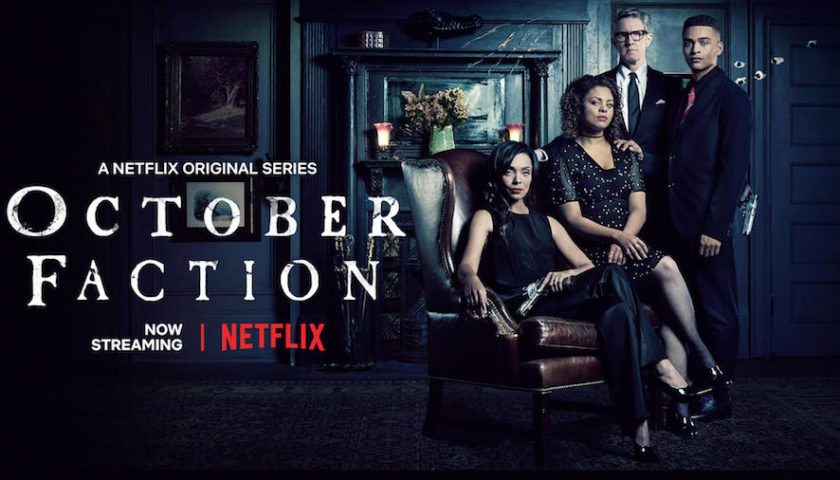 October Faction is a new series coming to Netflix, that follows the adventures of a globetrotting family of monster hunters. The series is based on a comic book written by Steve Niles, and drawn by Damien Worm. With the series on the way IDW have put together a new bumper book containing the first twelve issues of the series, October Faction: Open Season.

October Faction: Open Season introduces readers to the Allen family. There’s the college professor Fred, his wife Deloris, and their teenage kids Geoff and Viv. Fred used to be a monster hunter, but has since left that life behind for his family, but this has led to a less than perfect family life. His wife has become somewhat distant from him and the two of them hardly speak, and his children want desperately to follow in his footsteps and become monster hunters; something that he is dead set against.

This boring life gets thrown out of balance, however, when an old enemy of Fred’s, Merle Cope, arrives in town and meets with Deloris. This sets off a series of events that makes Fred and his family the target of a number of supernatural threats, brings them closer together as a family, and even brings some strange new additions into their ‘October Faction’.

Despite being a hefty twelve issues long the book is really an introduction to the world and the Allen family. It’s not until the end of the 12th issue that it actually feels like they’ve all finally come together as a team and descided to make hunting monsters their mission. And you know what? It’s actually really good.

A lot of comics, especially ones that have a team, tend to have the set-up happen quite quickly. Normally by the end of issue six a team comes together and has set out on their mission to do good. October Faction: Open Season takes its time with setting up the characters and the world. It knows that this isn’t an established universe that fans already know, with recognisable characters, so it doesn’t rush laying the groundwork. We get to know the characters, their motivations, their back stories, and the narrative is better for it.

The characters are a varied and interesting group, and the members that come from outside the family to join them are actually some of the more interesting; though I don’t want to say much about them as I wouldn’t want to spoil any of the surprises. The story also touches upon a much larger world, making it bigger than just Gristlewood, and giving hints to readers about the kind of creatures and adventures the heroes might have to face in further volumes.

The artwork helps a lot with this too, with Damien Worm taking on a much more muted look through many of these early parts of the book. He doesn’t go for big splashy backgrounds that the characters get lost in, instead making the people the focus of panels. He creates artwork that captures the look and feel of the world, often full of atmosphere, but a lot of the time there’s actually nothing in the panel except the characters. But, unlike some artists this doesn’t stand out in a bad way.

October Faction: Open Season is a great introduction to the comic series, and I’m certainly going to be checking out more of it now. Plus, I’m really interested to see what the Netflix adaptation is going to be like and what things they change. A great horror comic chock full of interesting characters, fun creatures, and some great writing and artwork.