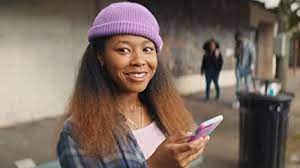 It’s fitting that Emmy-nominated actress Sanaa Lathan is making her feature directorial debut with a drama about the power of legacy. The veteran performer is the child of both another actress (Eleanor McCoy) and another filmmaker (Stan Lathan). She is likely well-acquainted with the pressures and pleasures of having great things expected of her because of her name and lineage. She doesn’t need to worry, because Lathan has a bright future ahead of her, thanks to a keen eye for casting, performance, and telling stories that matter.

Based on the best-selling YA novel by Angie Thomas, “On the Come Up” follows a rising rap star intent on making a name for herself while honoring her late father. “On the Come Up” embraces its fairy-tale feeling early on, opening with a title card that tells us it’s set “somewhere in America,” before zooming in on the fictional, mostly Black community of Garden Heights. But this fairy tale doesn’t have a happy start, as we meet young Bri (played in a short opening sequence by Noa Dior Rucker), her brother Trey, and mother Jada (Lathan) during an evening that Bri will later explain effectively ended her innocence. We’ll learn why soon enough.Lathan cast herself in the film’s trickiest role and while Bri might be most overtly obsessed with her dad’s legacy, it’s the fraught bond between Bri and Jada that serves as the film’s heart. Lathan is just as good on the screen as she is behind the camera, but she smartly shines the brightest light on the film’s breakout star: Jamila Gray, who plays 16-year-old Bri through most of the film. “On the Come Up” rests on her more-than-capable shoulders, and Gray ably maneuvers between all of Bri’s understandably big emotions as she attempts to mount a career while also dealing with her family, her school, her friends, and more. The film only works if we believe that Bri is a massive star and a generational talent: Gray is more than up to the task.

Bri’s father, Lawrence AKA “Lawless,” was one of the best rappers Garden Heights has ever known — and that’s saying something, because as we travel around the neighborhood, it becomes clear that the Heights has plenty of rap talent, from rising stars like Milez (Justin Martin) and Infamous Millz (Lil Yachty) to those that may never be discovered — and Bri wants to be just like her dad. Bri’s first attempt at rap battling refereed by local DJ Hype (an energetic Mike Epps) doesn’t pan out — she basically makes a run for it, and who could blame her — she’s soon thrust into the spotlight.

The film is the second adaptation of one of Thomas’ YA novels — the first was George Tillman Jr.’s “The Hate U Give,” which also centered on a talented young Black woman trying to balance her desires with the needs of her family and community — and while both films offer sterling roles for their stars, Thomas’ work is so rich and layered that each feature is at the mercy of their screenplays. “On the Come Up” was adapted by “Queen Sugar” and “This Is Us” writer Kay Oyegun, and often suffers from her (understandable) attempts to cram as much of Thomas’ material into one feature.

While the sequences that follow Bri’s rise to rap superstardom make up the bulk of the film (even Bri’s voiceover narration slips into rhyme, a wonderful choice to help us learn her voice as both a rapper and a young woman), Oyegun is also tasked with introducing a subplot that sees Bri become a flashpoint at her high school, where she and best pals Sonny (Miles Gutierrez-Riley) and Malik (Michael Cooper Jr.), are part of a “diversity initiative.” A subplot follows the very timely topic of excessive force used against young Black people, but it doesn’t fit alongside Bri’s starry-eyed dreams and they only dampen each other’s power. (Later, of course, the two plots do intersect, but Thomas pulled off that marriage with more ease in the novel.)

Bri’s star rises. She finally battles it out and proves to have not only the rhyming chops but pure stage swagger; second and her father’s former BFF Supreme (Method Man) sets his sights on building Bri’s career. Falling under Supreme’s sway means Bri needs to fire her own aunt, Patricia AKA Poo (a wonderful Da’Vine Joy Randolph), who has so far guided her latent career. Not enough drama? Poo also has beef with some local gang members, which Bri stirs up through her first hit single, a raucous burner that sounds great on the radio but doesn’t necessarily speak to what she really wants to say.

That’s the crux of Bri’s big dreams: sShe wants nothing more than to be a rapper, but many forces (mostly Supreme) conspire to reduce her voice (literally and figuratively) to what is “expected” of a young Black person. Is she aggressive, angry, slinging rhymes about Glocks? That’s what she’s been told, even as we know that Bri is pragmatic, responsible, and passionate. Why can’t she rap about that stuff? Such is the tension, and Gray excels at embodying all of Bri’s conflicts, bringing heart and nuance to a deep, searching character.

Where this all lands might feel expected, but Lathan finds surprises at every turn, mostly in her loving and respectful treatment of Bri, who is here oriented as nothing less than a mythic heroine. She should be: Her story is big enough and powerful enough, and Gray slips so fully into her, inspiring deep empathy and the kind of stand-up-and-cheer attitude that any good coming-of-age tale should elicit from its audience. She, just like Bri, is very much on the come up.