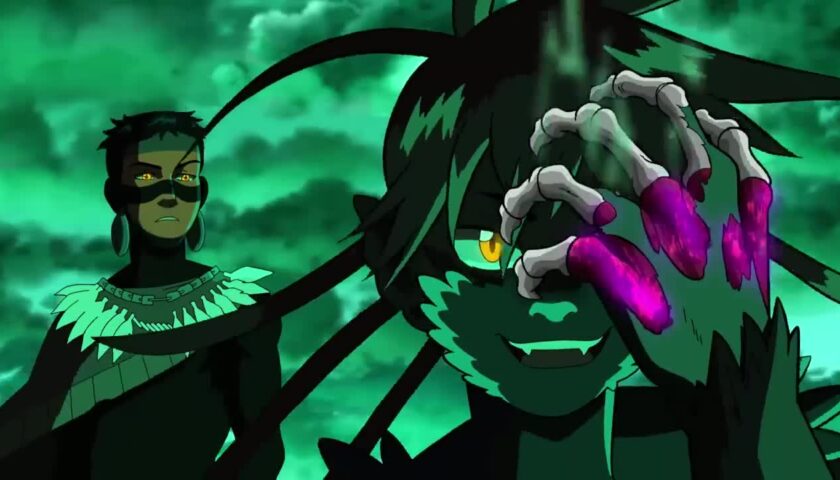 I stopped watching after episode 5, this review stating the reasons why.

Story: This one is jarring. In the first episode we get some glimpses of the Gods (more on them later) and human sacrifices, which I found to be an interesting premise. But then it turns out the story isn’t about the cool Gods but about some random boy who has to save the world.

Characters: They are all over the place. I rarely understood why they behaved like they did and often they change from one emotional state to another within seconds.

Voice acting: Horrible. Not sure whether they feel bad because the characters are written inconsistent or whether it’s the other way around but I didn’t like the voice acting. Also

Setting: Great, actually. Firstly I don’t know much about the precolumbian mesoamerican culture, but this feels like the writers did their job here. We do see them working and trading, which gives a feeling for the culture. However there are different tribes and since I never heard of any of them and no map is ever presented I cannot pick them apart. I’m happy whenever a non-standart culture is presented in media. That aside I find the Gods fascinating. They treat humans like ants beneath their feats and not without reason: These Gods are almost all powerful and can wipe out and recreate humanity whenever they see that fitting. Fascinating concept that unfortunately isn’t explored enough. Unlike in a lot of media, blood sacrifices aren’t treated as evil, but as a necessary tribute humanity has to give the Gods. In fact, nobody is happy about it, but since the Gods are as powerful as they are, it’s still better than being wiped out. Again, fascinating but not explored enough in this series.

Voice acting: Horrible. Not sure whether they feel bad because the characters are written inconsistent or whether it’s the other way around but I didn’t like the voice acting. Also while every thing looks Indian, nobody talks like it. (Obviously they need to talk English, but they could choose their vocabulary more fitting.)

Visuals: I can’t quite point my finger on what it is, but sometimes I find it ugly and other times it’s the visuals that keep me watching. You’ll probably either like or hate it. It’s however at it’s best when it shows big stuff like Gods or Buildings.

Action: Sometimes horrible sometimes subpar. Also brutal. Whenever the protagonists are outmatched, their opponents wait to give them a fighting chance. (That’s at least how it felt for me.) That means, there are no stakes and whenever they are paired against some strong monster, it drops in quality, but is watchable when fighting weaker monster.

Fazit: You can watch this one if you like the visuals or the fact that it’s about mesoamerica. Otherwise skip it. Why 4 stars? Firstly I want to preserve anything below 2 stars for series that I find insulting as a viewer, which is not this one. Plus two stars for the two things I liked.