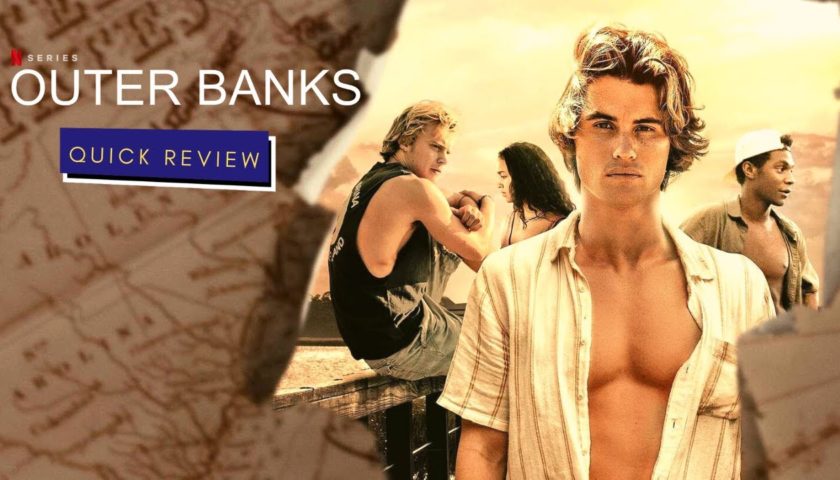 As Netflix’s latest nostalgia-in-a-blender exercise, teen drama Outer Banks is designed to trigger memories of a dozen movies from the ’80s and at least as many TV shows, counting on those conscious and subconscious responses to carry viewers through 10 episodes that are reasonably watchable, but contain very few original pleasures.

So file away that Outer Banks is Goonies meets The O.C. by way of Red Dawn and Netflix’s very own Stranger Things and possibly On My Block, with just a dash of a high-school Simple Plan — and maybe your affection for those titles will carry you through the long stretches during which Outer Banks veers between stupid, ridiculous and, in little bursts, fun.

Set in the Outer Banks of North Carolina — filmed with acceptable replication in South Carolina locations — the series is a story of class warfare and treasure hunting, not always in that order.

Our heroes are the Pogues, the blue-collar kids on an island fiercely divided between the haves and have-nots. John B (Chase Stokes) narrates and drives the story — and yet somehow, in 10 episodes, fails to generate a single Beach Boys reference even from older residents — as the son of a missing man obsessed with the Royal Merchant, a vessel sunk and vanished in 1829, but rumored to have gone down with $400 million in British gold.

John B lacks all guardianship, but he has lifelong friends in J.J. (Rudy Pankow), the troublemaking son of an abusive drunk; Pope (Jonathan Daviss), the allegedly smart kid who never does anything smart the entire series; and Kiara (Madison Bailey), technically more economically comfortable than her pals but allowed to tag along because they all seem to be in love with her.

If the Pogues are the scrappy poor kids in this landscape, their rivals are the Kooks, children of the resident upper class. Sarah Cameron (Madelyn Cline), briefly formerly Kiara’s best friend and now her antagonist, is perhaps the queen of the Kooks, dating ultra-preppy Topper (Austin North), a WASP-y jerk so repellent he makes William Zabka’s pre-Cobra Kai version of Johnny Lawrence look reasonable and endearing. The premiere features a beach party brawl in which the only reason Topper doesn’t bellow “Welcome to The OB, bitch!” at his vanquished foe is probably because creators Josh Pate, Jonas Pate and Shannon Burke assumed audiences would be able to fill in the blanks themselves. It’s the same reason none of the Pogues literally announce, “Pogues never say die!” You’ll just be thinking it.

Oh, and Sarah’s wealthy father is played by Charles Esten, easily the most recognizable member of the cast (though Adina Porter as the local sheriff probably comes close), which ultimately means exactly what you think it does.

So … plot! John B and his friends find several clues related to his dad’s disappearance, clues that might lead them to the Royal Merchant and its life-changing bounty. Or maybe they’ll just get caught up in increasingly serious conflict with the Kooks or in various storms that knock out power for much of the region so that even though Outer Banks is set in the present day,  reduced availability of cellphones and computers means it could just as easily be 1984.

Directed primarily by Jonas Pate, Outer Banks looks like nostalgia feels. Much of the series is lensed through a cloying golden haze as if every second were taking place at Magic Hour, even if none of the series is actually taking place at Magic Hour. It’s actually very pretty, so kudos to cinematographer J.B. Smith, even if much of the perpetual gloaming was surely achieved through postproduction. Confusion about the passage of time both within individual episodes and within the first season as a whole — you could tell me these 10 episodes take place over four days or over two months and I’d probably believe you — is just one of many narrative problems.

When Outer Banks is going about its treasure-hunting business, there are engaging moments, some entertaining following of clues and one use of Gullah that I desperately wish had been an intentional piece of the show’s cultural awareness rather than a one-off detail that most viewers will surely ignore. The treasure hunting offers a couple of minor thrills and some off-kilter notes of humor, but it’s usually followed quickly by class warfare material undone by how absurdly one-dimensional every Kook other than Sarah is.

The last three episodes, which easily could have been condensed as two (or maybe even one) hours, become the rare example of a show in which narrative momentum relies exclusively on every single character doing the dumbest thing possible. I kept watching in the hopes that several poorly conceived secondary villains might die violent deaths, which isn’t exactly what you want in a show in which most of the characters are supposed to be 16 (even if the actors playing the parts appear to be in their mid-twenties, as befits the genre).

That the Kooks are all cartoonish doesn’t necessarily mean that the Pogues are marvelously developed characters. Like, if you removed the references to the scholarship interview Pope is preparing for, he might not have any dialogue, while reducing Kiara to “object of affection for all” leaves that character with no real agency of her own other than “Who will she end up macking with?” And yes, the characters in Outer Banks say “macking” a lot and I don’t know if the dependence on dated slang is meant to point to their isolated geography or if it’s just more nostalgic pandering.

Stokes, who looks and sounds like a less dynamic Penn Badgley, and Cline, also calling to mind your pick of comparable ingenues, have an occasionally appealing chemistry even if almost nothing in their characters’ relationship makes any sense in the event that the season takes place over a week.

The show is positively littered with characters and plot threads that feel like they might have been relevant or even important in a 13-episode season or a YA novel that offered more breathing room. The entire non-Sarah Cameron family, in fact, feels like it was left on the cutting-room floor, including apparent stepmom Rose (Caroline Arapoglou), confusingly aged daughter Wheezie (Julia Antonelli) and older sibling Rafe (Drew Starkey), whose capacity for doing contrived, illogical things is only rivaled by the black-sheep brother on this season’s Ozark.

It’s hard to put a finger on the exact demo Outer Banks is going for. It’s full of underaged drinking and drug use and the characters swear up a storm, but there’s an oddly puritanical streak to the way the show depicts sex when it isn’t ogling the beach bods of its teenage characters. So the ideal audience age is somewhere between the age I was when I saw and loved Goonies the first time, the age I was when I rewatched Goonies and could see all of its flaws and the age I am now, when I can see Goonies through both clear and nostalgic glasses. So maybe I’m the audience? Unfortunately, I’m already able to see this show’s flaws far too clearly.