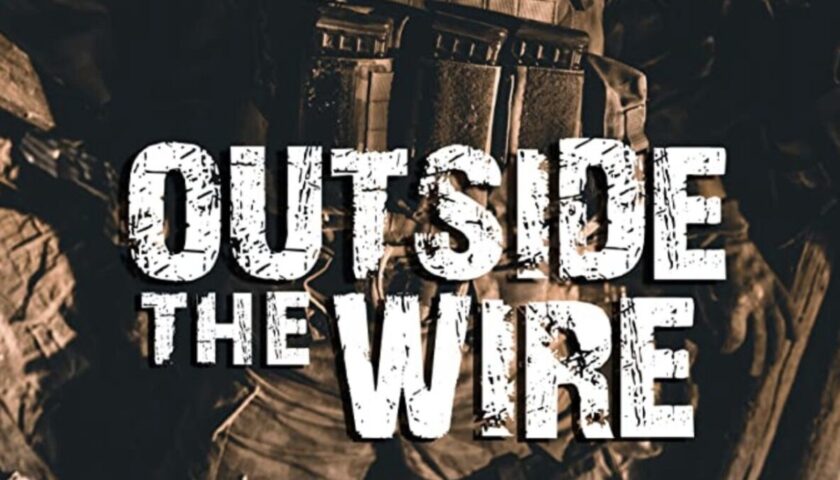 Hollywood has been saturated with films of terrorist groups that have a fanatic love for cybernetic technologies. Outside The Wire is no different, with its vanilla plotline of an unlikely pairing of military experts to stop a – wait for it – nuclear attack. At the time of writing this review, the film is at ‘#2 Trending in India’ on my Netflix home screen, but I never took these rankings as a sign of critical success but rather just popularity (case in point: Extraction).

Starring Anthony Mackie as the cyborg captain Leo and Damson Idris as drone pilot Harp, the film is set in a distant future where tech warfare is a norm. Harp, at the start of the film, has just come off a failed mission where two Marines died in order to save 38 Americans (at his order), which he justifies at a hearing that it was the logical thing to do. Taking place in Eastern Europe, the mood is already unstable as Harp is recruited by Leo.

Droning on, and on
At first glance at the film key art, seeing Mackie as a Winter Soldier-esque soldier did induce an eye-roll, and upon watching the film I found Leo has little pull aside from the fact that he is a sentient cyborg. In one scene, Harp asks Leo if he’s an AI to which Leo responds, “A phone is AI. A Gump is AI,” but later does little to reveal he’s anything more than what he just trashed. Having seen him in films such as Hurt Locker and series Altered Carbon, the warrior role is something he’s honed in on pretty well over the recent years.

However, with Mackie taking on a producer role here, it feels like he let Leo down by not pushing the boundaries of a very malleable character.

One right thing done by Outside The Wire is bringing in the magnetic Idris who plays rookie Harp to the T. Harp embodies patriotism with inner-conflict, as would most rookie soldiers who have not seen bloody and complex geopolitics that close.

Thematically, the film does have us question the ethical uses of drones, which is far from theoretical. For a long time, governments have employed these unmanned aerial vehicles in long-range warfare or surveillance, particularly in the U.S. Government. Across film and TV, we’ve seen the more nefarious uses of drones, such as in Black Mirror’s episode ‘Shut Up and Dance’ where blackmail was anonymously carried out via drone.

The battle scenes are nicely paced and well-choreographed in eye-catching set designs. Director Mikael Håfström did well here to balance out these dynamic scenes with equally strong dialogues but it is during the relief scenes we see the film’s weak points: a lulling plotline that tired itself out.

Big picture, Outside The Wire is a half-baked effort on Netflix’s part. The plot gets tedious despite strong acting chops from both Idris and Mackie. Director Håfström and writers Rowan Athale and Rob Yescombe took a potentially cerebral core topic and unfortunately ventured down a predictable path of a snooze-fest with an occasional gun show.