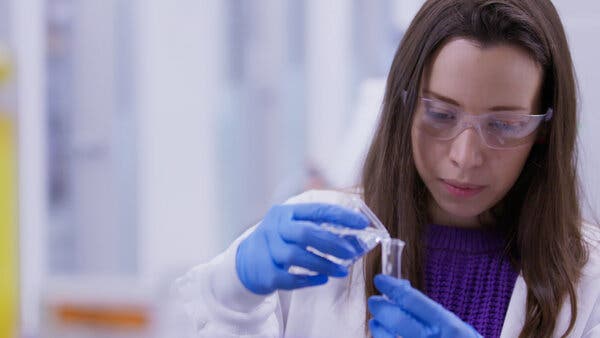 “Own the Room” opens with a scene of joy, as we watch a young man get showered in confetti and attacked with silly string while co-workers and friends cheer his nomination to the Global Student Entrepreneur Awards, one of the most esteemed business competitions in the world.

For viewers who have spent a year social distancing by the time “Own the Room” is released, this physical expression of happiness feels both palpable and incredibly moving. A kind of youthful exuberance thrums throughout the documentary, urging viewers to see the GSEA as not simply a competition, but a beacon of hope for a world that needs new visions. And yet, while “Own the Room” brims with genuine optimism, the film also resists delving into more challenging territory, refusing to place the story of these bright-eyed entrepreneurs into a larger conversation about the ways society fails young people by relying on them as saviors.

“Own the Room” anchors its viewers by having us follow the path of five specific GSEA competitors. We learn not just about their individual dreams and talents, but about the communities they come from, the families that support them, and the visions they have for a brighter world. The confetti-showered Santosh is a “surprise planner and happiness distributor” from Nepal who works with his clients in order to create wonderful moments that will help bring people closer together. Later, we meet Daniela, a scientist who immigrated from Venezuela to the United States and who wants to harness the power of the sun in order to revolutionize the way we make chemicals; Jason, a coder from Greece, developed an app to translate a baby’s cries so that new parents can understand what their baby needs. We also meet Alondra, an entrepreneur from Puerto Rico, who developed an app that helps the deaf community communicate with those who don’t understand sign language, and Henry, a coder from Kenya, who created an app to help young people find much-needed housing.

Over the course of 90 minutes, viewers are given a front-row seat to experience the thrill of being nominated, the anxiety that comes with actually pitching their ideas, and the aftermath of what it’s like to reflect on their experience participating in the competition. Like 2002’s “Spellbound” which focuses on eight children competing in Scripps National Spelling Bee, interviews with contestants are impeccably earnest and insightful, and viewers will find themselves cheering on for each candidate, wishing that each one could win the illustrious grand prize.

At the same time, the film’s short run-time doesn’t allow much space for viewers to think about the world beyond the competition and what it means that young people are increasingly encouraged to think about themselves as a “brand” in order to make their mark on the world. While watching “Own the Room,” I thought a lot about the 2019 HBO documentary “The Inventor: Out for Blood in Silicon Valley,” which looks at the life of Elizabeth Holmes, and how a culture of self-promotion (and our obsession with youth, confidence, good looks, and status) ends up giving a woefully unqualified candidate an exorbitant amount of money to create a product that turns out to be too good to be true.

Certainly, all the candidates who participate in the GSEA have deeply compelling ideas and have already started to bring those ideas to fruition in their communities. But I wanted “Own the Room” to go beyond the excitement and glamour of the competition itself, in order to interrogate the ways young people have to fight in order to be heard, as well as how much personal circumstance and, often, blatant bias, shape which ideas will ever see the light of day.

This is seen most clearly when looking at Henry’s story. Out of all the candidates we follow, he’s the only one who gets turned away at the border to Macau, due to a dispute about the amount of money he needs to enter the city. Henry’s exhausting journey demonstrates how, despite the emphasis the GSEA places on uplifting talented young people worldwide, the very ability to pitch is predicated not just on each student’s unique skills, but also whether the world will ultimately uplift and support them.

This limitation is also seen when judges discuss how they are assessing candidates, not just on their specific idea they are pitching, but their complete potential as individual changemakers. As a viewer, I wondered how exactly this was being assessed and how much subjectivity occurs when deciding who gets to be one of the chosen finalists, as well as how it’s possible to compare such tremendously different projects.

More background information would help viewers to understand the specific kinds of criteria that are being used to assess each candidate. But “Own the Room” is more interested in warming hearts than asking questions about the culture it immerses us in—one in which young people are asked to constantly perform with confidence, enthusiasm, and just the right amount of vulnerability in order to appeal to a much older audience. In this way, while “Own the Room” succeeds at offering a captivating look at its incredible subjects, it also avoids more complicated questions about how we can best support young people and help them achieve their dreams.