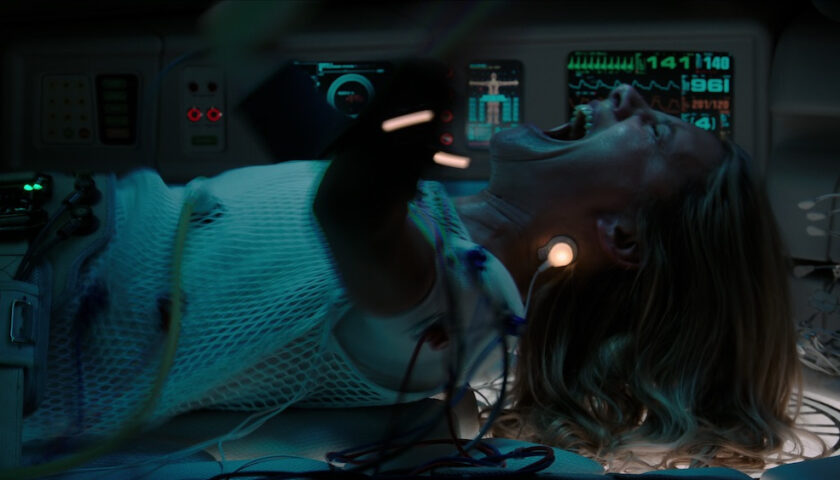 A clever example of creativity thriving within the strict protocols of the coronavirus pandemic, tense confinement thriller “Oxygen” plays like “Buried” in outer space: a ticking-clock sci-fi survival drama centered on a single character (“Inglourious Basterds” star Mélanie Laurent) trapped in a spiffy, coffin-like cryochamber with critically low reserves of breathable air. The blank-brained “bioform” awakens ahead of schedule, sealed in some kind of futuristic membrane, with only a helpful HAL 9000-like talking computer called MILO (short for Medical Interface Liaison Operator, voiced by Mathieu Amalric) to assist her.

Making his first French-language feature since “High Tension,” extreme-horror helmer Alexandre Aja injects a bit too much outside-the-box style into Christie LeBlanc’s bare-bones, Black List-selected screenplay. But the timing is fortuitous: Here’s a high-concept Netflix movie, originally intended for another actress (Noomi Rapace, who retains an exec producer credit), that was shot in the window between France’s initial COVID-19 lockdown and the industry-hammering second wave.

Arriving now, as humankind tentatively emerges from a kind of global hypersleep, the film’s basic scenario ought to resonate with the isolation audiences have been experiencing in their own lives — and the larger question of whether we really want to return to what we knew before. This is a proactive choice, and one that Laurent’s character must make as her oxygen levels drop, with only a limited time to ascertain her situation, recover her memories and save herself.

Aja’s directorial interference can be distracting at times, but that’s not necessarily an accident. As if he didn’t want viewers to realize just how limited his skeleton cast and crew were in executing the film, the helmer embellishes his key location — a sleek white cryo pod of the kind that Apple designer Jony Ive would no doubt imagine, if tasked with deep-freezing human specimens — with frequent flashbacks and a few massive-scale visual effects shots.

Elaborating on the latter would spoil the surprise, although how many possible explanations can there be for why a person is waking up in a cryochamber? To describe LeBlanc’s solution as far and away the most obvious would be an understatement. Still, it’s the specifics that make the puzzle interesting, as Laurent’s Liz — or Omicron 267, as MILO first identifies her — races to put the pieces together.

For the first hour, Aja splices visual clues into the claustrophobic scenario: shots of lab rats in mazes, unethical medical experiments and flashes of what Liz presumes to be her past life involving beardy fellow doctor — and possible husband — Léo (Malik Zidi). Trouble is, every time editor Stéphane Roche cuts away, Aja’s “let’s open things up as much as possible” strategy breaks the spell of being trapped in a bubble with Liz. Also, the more we see outside her pod, the faster we figure out her predicament. And it can be frustrating waiting for her to catch up, especially since she’s the one supplying red herrings most audiences can see through straightaway.

A benign and mostly compliant AI (with the capacity to shock or inject her, if necessary), MILO is more than just the key tool in Liz’s problem-solving kit: He’s a sounding board for everything that goes through her head. The trick is to know what to ask him, turning the entire film into an extended game of “20 Questions.” Turns out he’s also a long-distance operator, helping her place a series of scratchy phone calls to the police, to Léo and to … a version of herself on the outside world.

If stuck in Liz’s situation, most of us probably would’ve started where she ends up, asking MILO to redirect fresh air from outside tanks to her pod, but by the time she thinks to do that, her oxygen levels are down to just a few parts per thousand. At 3%, the CEP — or Charitable Euthanasia Protocol — kicks in, making the film’s outcome somewhat unclear. (Now, I don’t know a lot about suffocation, but I gather that it’s one of the most uncomfortable ways to die, and the movie never actually engages with what that would look or feel like.)

That’s because “Oxygen” isn’t a survival story in the conventional sense after all. Unlike “Buried,” wherein Ryan Reynolds struggles to escape a coffin with only a cigarette lighter and a low-battery cell phone to his name, the essence of “Oxygen” is more existential in nature. Liz must divine who — or more accurately, what — she is, and once that revelation comes to light, there’s a conscious choice to be made as to whether she wants to keep breathing at all.

This probably would have worked a lot better without the abstract glimpses of Liz’s pre-freeze life. Frankly, it was almost certainly more effective on the page, where those who awarded “Oxygen” its Black List status relied on their imaginations to fill in the gaps. Executed the way Aja approaches it, the plot holes become apparent. Some are big enough to push an asteroid through. But it’s an intriguing journey all the same, and — deep breath — by Netflix’s hit-and-miss standards, it’s better than such recent English-language offerings as “The Midnight Sky” and “Stowaway.” So there’s that.