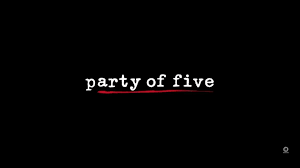 I was too young to watch the original Party of Five on Fox, but it was such a phenomenon that I definitely knew about it. The hour-long drama made stars of Neve Campbell, Matthew Fox, Scott Wolf, and Lacey Chabert and Freeform’s 2020 reboot may do the same for Brandon Larracuente, Niko Guardado, Emily Tosta, and Elle Paras Legaspi. All I knew about the original series is that it was about five kids of varying ages who looked after each other following the loss of their parents.

In the new Freeform version, the parents don’t die. Inspired by recent political events, the Acosta family owns and operates a restaurant and their five kids range in age from 24 to 1-years-old. When the police come into the restaurant and discover they don’t have their papers, the parents are deported and the eldest son has to give up his music dreams to look after his siblings, who are all struggling in their own ways. To further complicate things, the only adult child is a Dreamer, pending his own long term citizenship which could be threatened by a change in political policy. One brother is failing out of high school while an academic sister is going through a rebellious phase and the toddler is having medical issues, all things that the family’s new patriarch is unqualified to assist with.

The show is an ensemble piece, but oldest son Emilio (Brandon Larracuente) becomes the central character of the pilot and is the one that most Freeform viewers are going to latch on to. With a primarily female target audience, 16-year-old Lucia (Emily Tosta) is likely to become the most relatable character for Freeform’s core viewers who will identify with her challenge to find her identity when her world gets turned upside down.

Party of Five is quick to set up a love conflict by the second episode when teenage brother Beto (Niko Guardado, ABC’s The Goldbergs) hires a hostess for the restaurant because he has a crush on her, only to find that she is hooking up with Emilio. The tension is gripping and the three eldest kids all have such complicated lives that you can’t help but want to binge the entire season in one sitting. You’ll have to wait, as Freeform will be airing one episode per week on Wednesdays starting January 8th, 2020.

Since the parents aren’t dead in this adaptation, they still have some presence in the lives of the Acosta kids. This creates an added layer of conflict as the kids are trying to scrounge up enough money to pay for an immigration lawyer and the parents are able to phone in, judging and critiquing the situations at home. As Emilio struggles to establish himself as a parental figure for his siblings, his parents add an extra layer of tension to the situation.

I enjoyed Party of Five more than I expected to. I may have been too young for the original and it’s true that I’m outside of Freeform’s target demographic now, but this series has wide appeal. It’s the kind of show that parents can enjoy with their teenagers and it has the potential to cover pretty much any situation imaginable, making it an easy way to start conversations with your kids about topics that may otherwise be uncomfortable. I give Party of Five 5 out of 5 Acosta children.