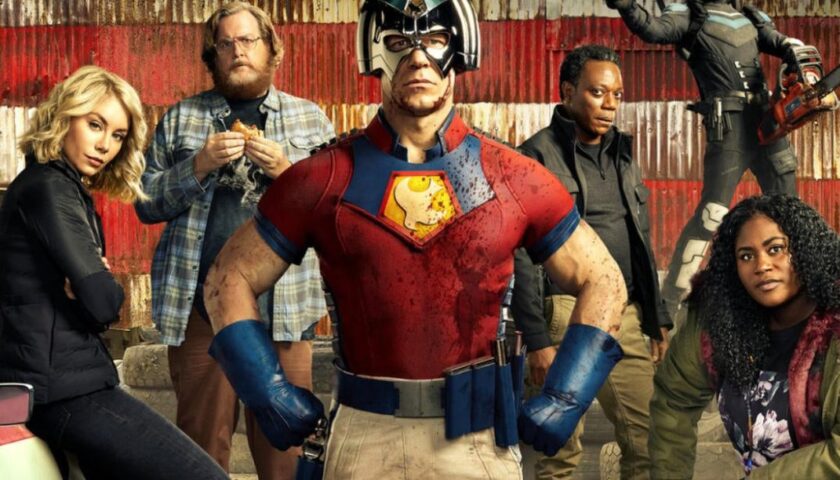 When I think about the eras of DC Comics that are near and dear to my heart, the 1980s always stands out. Sure, the decade was filled with bombastic, genre-defining crossover events and maxiseries, but the periphery of the publisher’s outputs was a showcase of an unparalleled amount of creativity. In the ’80s, it felt like any costumed character could (and realistically, did) get their own several-issue miniseries or short-lived ongoings, expanding out their worlds and supporting casts far beyond fans’ expectations. Among the massive roster of characters to get that treatment (in his case, with a four-issue miniseries) was Peacemaker, a Charlton Comics character from the 1960s who was then folded into the main DC universe post-Crisis on Infinite Earths. Those four issues took the goofy and violent character and made him even goofier and more violent, all while crafting an origin story that was both reverential to old fans and accessible to new ones.

HBO Max’s Peacemaker TV series, which is written, created, and partially directed by The Suicide Squad’s James Gunn, could not have more of a similar sensibility, as it melds the best gimmicks of the 1960s and the 1980s — both from its titular character’s past, and from genre storytelling overall — with a uniquely modern black comedy. While the end result isn’t flawless, the first seven episodes make up for it by being violent, endearing, and absurdly entertaining, all while showcasing the untapped potential of TV that is set within the main DC Extended Universe.

Set after the events of The Suicide Squad, Peacemaker follows the pacifist vigilante Christopher Smith, known as “Peacemaker” (John Cena), who is recruited to another top-secret ARGUS task force to eliminate the members of a mysterious conspiracy. Helping him on the mission is an even more ragtag group than Task Force X, with The Suicide Squad alums Emilia Harcourt (Jennifer Holland) and John Economos (Steve Agee), grizzled and mysterious team leader Clemson Murn (Chukwudi Iwuji), and new recruit Leota Adebayo (Danielle Brooks). As the mission begins to test the team — and the team begins to test each others’ patience — Smith also has to grapple with elements of his pre-prison life, including his “friendship” with a fellow costumed antihero named Adrian Chase, also known as “Vigilante” (Freddie Stroma), and his problematic relationship with his father, Auggie Smith (Robert Patrick).

After Gunn and Cena’s previous collaboration on The Suicide Squad — a film that understood the poetic weirdness and beauty of superhero comics in a revolutionary way — some viewers will probably go into Peacemaker expecting eight more installments of the same flavor. While the series is absolutely (both narratively and thematically) a sequel to The Suicide Squad, it quickly morphs into a viewing experience that is wholly unique. It’s both thrilling and a little jarring watching Gunn’s mile-a-minute, genre-bending movie pacing transition over to television, as it allows for an unprecedented level of character exploration and development, and for the series’ season-long plotlines to really simmer. That being said, the breadth of that storytelling occasionally has some downsides — when binge-watching the show in a close amount of time, certain scenes or one-liners can come dangerously close to feeling drawn-out or too similar to one another. (To an extent, that does feel quintessentially like reading an eight-issue arc of an ongoing comic book, where you might get more out of processing the installments individually over a stretch of time as opposed to one giant binge.) But those moments still prove to be more creatively interesting than a lot of the past decade of superhero television — and are vastly outweighed by moments that are brilliant and outrageous.

What ends up being so brilliant and outrageous about Peacemaker — especially as an officially sanctioned adaptation of a character from one of the two biggest fictional universes — is how it handles violence and profanity. Swear words are used so frequently that they basically double as punctuation marks, and it’s basically impossible to count the jokes about sex and other taboo topics. While that aspect will surely affect some people’s mileage on the show, it manages to feel gleefully organic within its world, and arguably leads to some of its standout moments. (One scene early on in Episode 6 is so hilariously constructed and acted, it’s going to be living rent-free in my head for several months.)

The violence ends up being a different kind of visceral tone from The Suicide Squad’s bloody deaths and hot dog-style dismemberings, especially when juxtaposed with the mundane rural setting of the show, but the result is still impactful and feels like a natural evolution from Gunn’s days working in horror. All in all, Peacemaker would probably be the worst nightmare of anti-obscenity crusader Frederic Wertham, whose fight against the “scandalous” content of Golden Age comic books forever impacted the industry. Even in our current age of boundary-pushing superhero satire like The Boys and Invincible, that’s a distinction that the series deserves to wear like a badge of honor.

That being said, all of the gore and lewdness of Peacemaker is impossible to separate from its incredibly strong emotional core, a detail that has become a bit of a staple of Gunn’s various superhero outings. There’s an inescapable silliness throughout the series, from the rapport between the characters to the mere concept of certain action sequences to the opening title sequence that needs to be seen to be believed. Even the comic characters innocuously name-dropped in conversations are some of the most bizarre and rewarding DC deep-cuts possible, and will surely delight fans of the weirdest annals of the publisher’s canon. And, like any good Gunn adaptation, the human-animal friendship between Smith and his pet eagle, Eagly, will surely pull on heartstrings.

But at the same time, the show takes the inherent corniness of Peacemaker’s world — his ridiculous costume, his American-flag-covered paraphernalia, and his unflinching adoration for the hair metal of the 1980s — and dives into the sadness lurking underneath its surface. Almost from the jump, the show uses Smith as a case study for the flaws of toxic masculinity, and that credo only gets stronger and more emotionally resonant as the season goes along. In the process, the show tackles the potential intersection between that toxic masculinity and white supremacy, through a storyline that I never would have expected to see in a mainstream superhero adaptation.

It feels impossible to imagine Peacemaker working (or even existing) without the cast that it has. While Cena already brilliantly made Smith his own in The Suicide Squad, the unembarrassed dimension he is able to bring to the series never ceases to be mesmerizing to watch. In a way, this series feels like the unintentional culmination of Cena’s entire career — as a wrestler, as an action-movie star, as a comedic actor, and even as a commercial spokesman. Holland and Agee, both of whom shined during their limited screen time in The Suicide Squad, get to flesh out their respective relatively obscure DC Comics characters in some truly fun ways. Iwuji and Brooks make pitch-perfect additions to the show’s ragtag team, bringing stellar pathos to two of the show’s most surprising characters. While Stroma’s Vigilante is characterized very differently from the straight-laced Adrian Chase that comic fans know, he sells that interpretation essentially every second he’s on screen, all while leaving just enough room to potentially grow into that more grizzled version of himself.

From the jump, HBO Max’s Peacemaker has had a fair amount riding on it — it’s the follow-up to a masterpiece of a superhero film, it’s the first TV show set officially within the DCEU, and it’s centered around a character who is still far from a household name. Still, all of those elements seem to work in the series’ favor, allowing for it to tell the action-packed, profane, and bizarre story that perfectly suits its protagonists without any real expectations. Yes, there are a small number of growing pains, but they are vastly outweighed by the creative and entertaining things that the series does right. Like the countless DC Comics solo series of the 1980s, Peacemaker proves an essential point about the DCEU — that when you showcase the weirdest possible fringes of a fictional universe, it helps the entire universe feel much bigger and more complete.