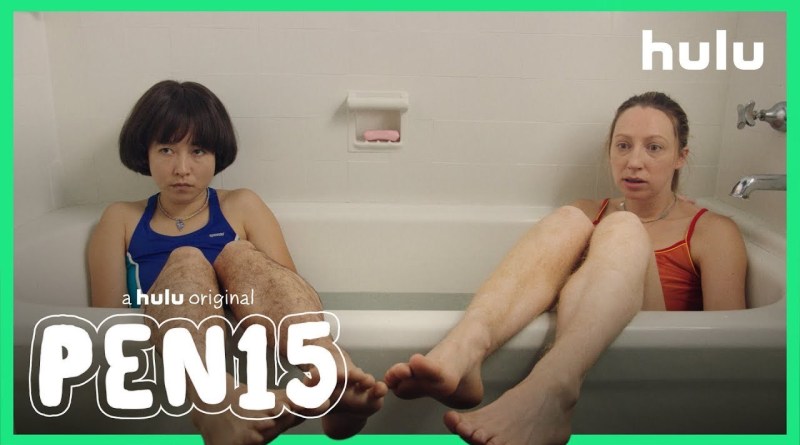 Review: While I appreciate Hulu’s attempt to initiate a story about puberty, it did take me a few episodes to buy into the two main characters. PEN15 follows two seventh graders taking on the world of School, and battling with the horrors of early teenage life. Anna Kone (Anna Konkle) and Maya Ishii-Peters (Maya Erskine) are the awkward-by-nature kids in school. They both embrace dorky behavior as a way of dealing with pressure. It’s a coming-of-age series we’ve all become accustomed too.

The premise for PEN15 is rather simple; Anna and Maya are best friends, and they are extra-pumped to be starting seventh grade. According to the pair, this year is where everything starts, and both of them are eager to share new memories. The close friends do absolutely everything together, and their chemistry gives off this unrealistic benchmark to what growing up is like.

I wish I could say I thoroughly enjoy PEN15, but I was only mildly amused. When scenarios come their way, they are met with an inch of comedy that does not know whether to be a severe lesson or not. The major problem is the way the characters are performed; especially in the first few episodes they are slightly bringing it home too actively, almost like the two are aware that they are not precisely thirteen so they have to perform as stupidly as possible to get the point across. Until you get used to their dynamic after a few episodes, Anna and Maya are somewhat irritating.

But there are many lessons to learn in Hulu series PEN15; friendships and growing up are essential. You almost forget what it’s like to have a friend back in school, and the importance attached to it, and the series manages to bring back that memory of walking to school with your close friends, that first beer you had at the park, the first intake of a cigarette, or that after-school outing to make out with another group of teenagers. PEN15 reminds us of how silly we were, but at the same time, humours the growing experience in an easy-to-watch series.

I would argue that Hulu nearly had their Sex Education with PEN15, but Netflix has well and truly batted them out of the water here. Instead, you have 25-minute bite-sized episodes that are okay to consume.