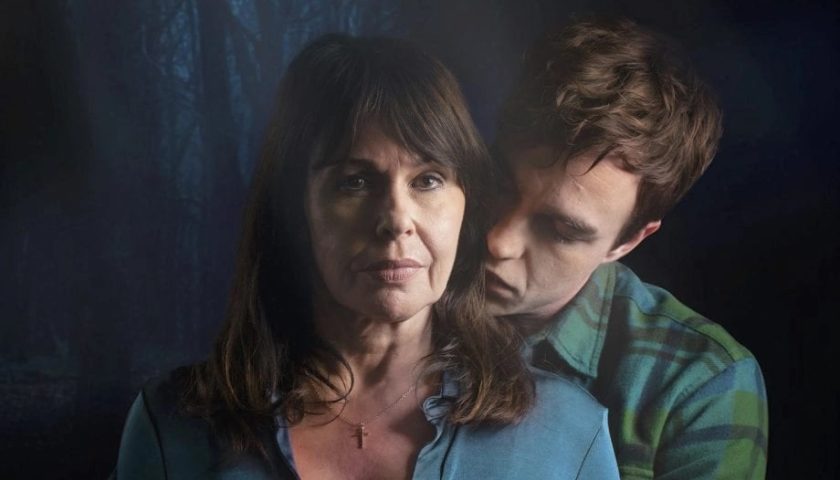 We live in strange times, for sure, but who would have thought that the one thing missing from them was a mashup of ITV’s remake of BBC One’s Gold Digger (the one starring Julia Ormond and some heavy yet sexy cardigans) called Flesh and Blood (the one starring Imelda Staunton, Francesca Annis and some fresh yet sexy sea views) and Arthur Miller’s A View from the Bridge? Not me. But television drama has located a new narrative seam, that of relationships between older women and younger men, and is currently mining it for all that it’s worth, so far most successfully by the team behind HBO’s Mrs Fletcher.

The newest nugget brought up from this yielding vein and set before us, this time by Channel 5, is a three parter called Penance. It stars Julie Graham and Neil Morrissey as grieving parents Rosalie and Luke Douglas, who – as the story begins – receive news of the death of their 20-year-old son Rob, who died while swimming in Thailand. As with Flesh and Blood, there is a mystery element. His sister Maddie’s first reaction to the news is odd (“Mum, I’m so sorry,” she cries guiltily, and her parents swoop down on her either to comfort or prevent her saying any more in front of the police), and Rosalie refuses to accept what has happened – Rob was a strong swimmer and there are snagging details in witnesses’ accounts of the evening. While Maddie (Tallulah Greive) turns to drink and drug-taking to cope with the family’s bereavement, Luke soldiers on – at least until Rosalie throws him out, unable to come to terms with both the situation and an earlier infidelity.

Into this maelstrom of emotion arrives young Jed (Nico Mirallegro), with whom Rosalie and Maddie bond at their bereavement counselling group, which he is attending after losing both parents in a car crash and more recently the grandmother who then raised him. Rosalie invites him back to supper, hoping he will be a good influence on out-of-control Maddie. Nothing, surely, can go wrong here. Oh. No, wait.

Children of course trail clouds of glory, heaven lying about them in their infancy. Alas, young Jed is a little past this age and trailing clouds of testosterone. Soon Maddie and Rosalie are both dreaming of lying about him in various states of undress, and Jed soon makes it clear that he is very willing to partake of the latter option. Rosalie is aware that the Rob-replacement aspect, her anger at Luke’s betrayal and – well, let’s call them assorted other sociocultural norms – complicate her situation and manages to reject him, at least when awake, for almost the whole of the first episode.

As the suspenseful psychological thriller it purports to be, Penance is a bit slack. The suspicious nature of Rob’s death is asserted rather than felt, and the subtext of the role Jed is playing in Rosalie’s life and vice versa is rendered far too “text” in conversations between the two of them and between Rosalie and her friend Father Tom (Art Malik). And the sense of further mysteries waiting to emerge comes less from any delicate script manoeuvrings than from the extra-viewing knowledge that you don’t put Neil Morrissey or Art Malik in such parts without them having much more to do than has actually been suggested yet on screen.

There are the occasional sounds of cogs and gears clunking – such as in the scene where Rosalie shows Jed childhood books, including “first editions!”, that she apparently keeps in the damp, barely used country cottage instead of her warm, dry home, purely so that he can buy her a replica of the necklace worn by one of her infant heroines and later lean in to fasten it round her neck. But, despite all this, it is basically fit for purpose. Which is mainly, at this point in the subgenre’s development, still to work out how a mass audience feels about sex-swapped, intergenerational banging (I mean, romance … I mean banging) and how long writers and makers have before they need to start adding real meat, real characters and real plots, because the frisson of novelty has worn off.

My own feeling is that they have a little longer to measure out and cut off the serviceable stuff by the yard before they have to start minding the quality as well as feeling the width. You don’t undo generations of male, middle-aged gaze overnight, but I look forward to the developments when they come. If they could get here before I divorce and have some actual aged skin in the game, that would be great. Which is what, after all, it has always been about, hasn’t it?