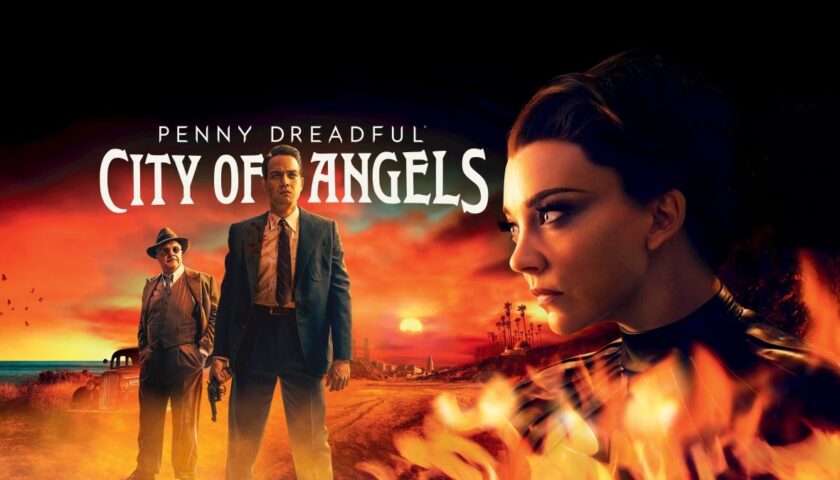 I loved the exercise of John Logan’s three-season Showtime drama Penny Dreadful, which ostensibly took the sensationalistic horror tropes of Victorian “penny dreadful” books and gave them a rapturous prestige TV polish. The series brought new narrative complexity and psychological — and especially psychosexual — richness to a pastiche of familiar characters, from Frankenstein’s monster to Dr. Jekyll to myriad interconnected vampires, werewolves and witches.

It all starts off promisingly. After a beautifully shot preamble introducing the clash between Santa Muerte (Lorenza Izzo), the Angel of Holy Death and the chaos-craving dark figure Magda (Natalie Dormer), a showdown with clearly apocalyptic consequences, the story jumps to Los Angeles circa 1938. Tiago Vega (Daniel Zovatto) is about to start a job as the first Chicano detective in the LAPD when his new partner Lewis Michener (Nathan Lane) summons him to work a day early.

Four bodies have been found in the Los Angeles river basin, bodies mutilated in ritual fashion and accompanied by the scrawled phrase “Te Llevas Nuestro Corazon Tomamos El Tuyo” (“You Take Our Heart, We Take Yours”). It’s obvious why Tiago has been put on this case, which seems to relate to the construction of the Arroyo Seco Parkway, an ambitious piece of urban planning set to decimate one of L.A.’s many ethnic enclaves.

This is contemporaneous with Chinatown and there’s a similar perspective on Los Angeles as a city that’s devouring itself in order to grow, where neighborhoods reflect each wave of immigrant experience, passing the torch from one to the next, often with violence. Tiago’s mother Maria (Adriana Barraza) has deep religious roots tied to Santa Muerta, while his siblings, including Raul (Adam Rodriguez) and Mateo (Johnathan Nieves), have ties to organized labor and the burgeoning pachuco subculture. In the background, we see L.A.’s rich and powerful — embodied by ambitious councilman Charlton Townsend (Michael Gladis) — bucking for control over the city of the future.

But Logan’s tendency is toward excess and the Penny Dreadful franchise, whatever else it might be, is a mash-up. Tiago and Lewis’ investigation will soon bring them into contact with stealthy agents of the Third Reich both high (Thomas Kretschmann’s Richard Goss) and low (Rory Kinnear’s Peter Craft, a pediatrician and German-American Bund leader), as well as leaders of an increasingly popular evangelistic church (led by Kerry Bishé’s Sister Molly and Amy Madigan’s Adelaide).

Oh, and if you’re reading all of this and wondering what any of it has to do with the Penny Dreadful franchise and its supernatural trappings: Well, Magda takes many forms and whether she’s an abused German mother, a brassy American secretary or a leather-clad avenging angel, she’s stirring this powder keg up.

Even with Logan writing every episode, it’s hard to exactly put a finger on what Penny Dreadful: City of Angels is or what it’s trying to generate from viewers. It’s definitely not scary or disturbing. It’s not especially mysterious, because if there are stakes for what will happen if Michener and Tiago don’t solve the murder, the series forgets about them for episodes at time. I initially thought this was a six-episode series and got to the sixth episode without having a clue of what I was hoping or expecting to have resolved.

And even if the sixth episode turned out not to be the finale (there are four additional episodes that were not sent to critics), the problem isn’t that it’s overcomplicated — a frequent issue in the original series — but rather that Logan keeps getting distracted by shiny things only to get jarred back periodically by, “Oh right, there was a murder!” or, “Oh right, Nazis!”

If pulp fiction was the spine of the original series, City of Angels is fixated on what it approaches as pulp religion, with predictable problems. Nobody is going to criticize you for not taking the mythology of Dracula seriously enough, but there’s a wealth of Mexican-American religion and folklore that’s being treated with an uncomfortable superficiality here. I get why the skulls and candles and imagery of saints and dark spirits might attract Logan, but it’s treated as a lot of symbols and signs without much meaning.

The same is true of how City of Angels approaches Judaism through Lane’s Michener. There’s an almost profound agnosticism to how City of Angels equates traditional faith with the witchcraft and blood cults of the original series — but if your point is that all religions are equally crazy, you’d better make that point more sharply.

With all that said, there are still some comparable Penny Dreadful pleasures carried over. Early episodes are directed by Paco Cabezas, Sergio Mimica-Gezzan and Roxann Dawson, and shot by John Conroy and Pedro Luque, so the series looks lush, sun-soaked and frequently stunning. I’d argue that the failure to have any Mexican directors in this initial grouping, especially given the spectacular strength of Mexican and Mexican-American directors in the horror genre, is a major oversight; their inclusion might have alleviated the only surface-level approach to Chicano culture, but that’s probably a separate conversation. Maria Caso’s production design and the costumes by Christie Wittenborn are instantly evocative and worth focusing on if one’s interest in the plot wavers.

There isn’t any single performance that can rival the go-for-broke mania of Eva Green’s series-dominating turn from the original seasons, but there’s a lot of very good acting. Dormer, playing at least four or five different variations on Magda, is a clear standout. Her accents aren’t all perfect, but maybe Magda isn’t a master of accents — and in a series with very little humor, my desire to yell “Roll in the hay!” every time her more Germanic character spoke offered fun of its own. The more actively demonic the character, the better Dormer is, and her sneering, pansexual, Zoot suit-wearing incarnation is an utter scene-stealer.

Bishé, radiating light like a wounded angel, and Madigan, all hard edges and disdain, are wonderful and Barraza offers soulful grounding. Lane dispenses with his normal schtick and gives a weary performance that gains in depth as it goes, especially in a talky sixth episode. Rodriguez and Nieves are dynamic and compelling but, in the process, somewhat upstage Zovatto, whose Tiago really should be the season’s star. Enough characters keep referring to Tiago as torn between two worlds and a man at war with himself that you wish more of that was coming through in Zovatto’s performance.

What Penny Dreadful: City of Angels ends up feeling like is a thinner extension of the recent run of alt-histories like Plot Against America, Man in the High Castle and Hunters. I still would have preferred more rigor and investment — but without the Penny Dreadful title, the result would have felt like less of a bait-and-switch.