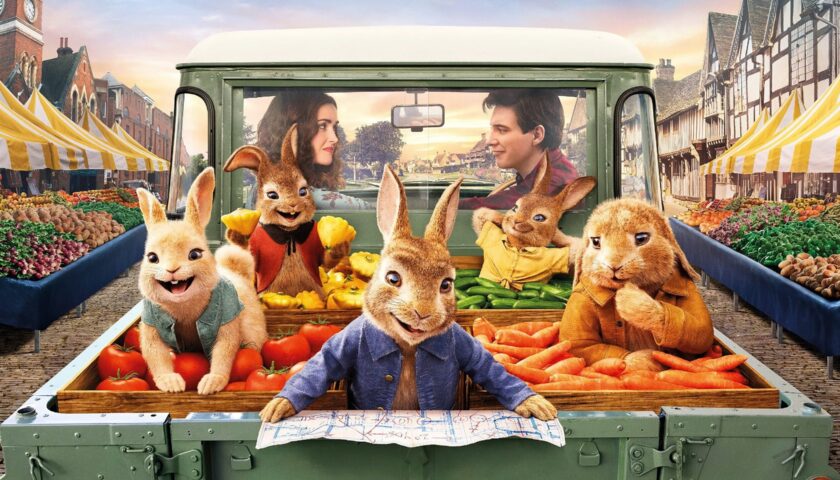 The first “Peter Rabbit” movie ends with one of the human leads turning the story into an illustrated storybook; “Peter Rabbit 2: The Runaway” sees that author grappling with turning the bunny story into a grotesque exaggeration of itself in order to reach a larger audience.

Meta-text aside, this sequel benefits from the diminished expectations held by almost anyone who watched its predecessor; this time at least, some of the gags actually land, be they verbal or physical, plus we get the added delight of David Oyelowo as a smooth-talking publisher who thinks the books would sell better if the rabbits wore T-shirts and high-top sneakers or, even better, traveled to outer space.

“Peter Rabbit 2: The Runaway” opens with the wedding of Bea (Rose Byrne) and McGregor (Domhnall Gleeson); the latter seems to have reached an uneasy détente with the local woodland creatures, who are allowed to eat anything in his garden except for his prize tomatoes. McGregor remains suspicious of Peter (voiced by James Corden), and when Oyelowo’s publisher wants to create a series of books based on Bea’s characters — with Peter cast as the “bad seed” — Peter decides that if he’s going to be treated like a villain, he’ll act like a villain.

He runs off to the city and meets up with older rabbit Barnabas (Lennie James, “The Walking Dead”), an old friend of Peter’s father. This new mentor shows Peter the ropes of getting adopted as a pet just long enough to clean out people’s kitchens, and he recruits Peter and his pals into participating in a huge heist involving a farmer’s market and a treasure trove of precious dried fruit.

The script by returning director Will Gluck and Patrick Burleigh has some fun with heist-movie clichés — when an older rat warns against “messing with the hard stuff,” he’s talking about jelly beans — and it achieves the film’s biggest laughs with some outrageous visual set-pieces, including a row of recycling bins turned into a whack-a-mole, a deer getting strapped into a parachute, and a clever spin on the old “standing on each other’s shoulders in a man’s raincoat” gag.

Between these periodic delights, however, the movie mostly vacillates between inside jokes for the parents (and again, just because you’re making fun of the idea of ending a kids’ movie with a car chase, it doesn’t mean you’re not actually ending your kids’ movie with a car chase) and exaggerated pratfalls (most of them by Gleeson, overacting all the way) for younger viewers. Like the first one, “Peter Rabbit 2: The Runaway” feels designed to get in on the “Paddington” action, but without any of the intelligence or sweetness of those contemporary classics (or of its own Beatrix Potter source material, for that matter).

If there’s a comparison to be made between the franchises, the “Peter Rabbit” films do effectively integrate the animated characters into the human world, giving them heft and substance while also meticulously highlighting each bunny hair and porcupine quill. But with Peter taking up so much space — and with Corden doing the voice, a little of this guy goes a long way — the supporting animals barely get to have personalities, even when they’re voiced by the likes of Margot Robbie (Flopsy) and Elizabeth Debicki (Mopsy).

There are certainly far more despicable franchises in the world of children’s entertainment than the “Peter Rabbit” series, but there are few this negligible, particularly considering the talent involved. Just because you don’t have to aim higher doesn’t mean you shouldn’t try.