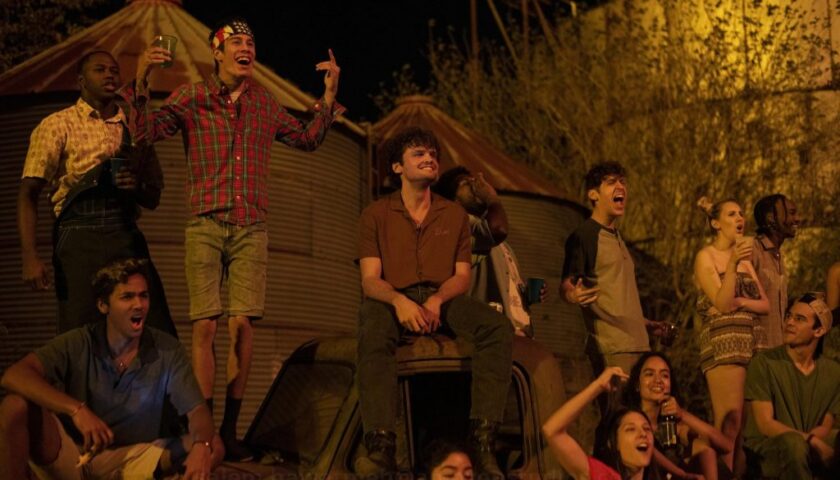 French director Axelle Ropert makes an unwise shift from sprightly comedy (“Miss and the Doctors,” “The Apple of My Eye”) to faux-naive artificiality with “Petite Solange,” a tiresome divorce drama seen through the eyes of an adolescent girl. Though clearly meant as a refreshing, femme-centric throwback to a style of filmmaking that petered out in the 1970s (Ropert cites inspiration from François Truffaut and Luigi Comencini), the results merely feel out of place, bizarrely innocent and clumsily executed. The fault lies in both concept and script, making it unlikely that “Solange” will be gracing many screens outside Francophone territories.

Danger signs are apparent right from the start when Benjamin Esdraffo’s inescapable saccharine music too quickly accompanies the action. The tunes are part and parcel of the film’s entire design, from the pale filtered visuals to the ’70s-influenced clothing — is that really a baked casserole the father serves up for dinner, and what on earth is going on with the science teacher’s mop of hair? All these throwbacks make you wonder whether the anomaly comes from the cell phones and other mod cons or the use of old-fashioned words long abandoned from most people’s vocabulary.

Thirteen-year-old Solange Maserati (Jade Springer) is an “average” schoolgirl living with her parents and older brother Romain (Grégoire Montana) in Nantes. Dad Antoine (Philippe Katerine, looking more than ever like David Crosby) describes her as “merry and turbulent,” though neither trait is especially in evidence, especially the latter. He runs a music shop while mom Aurélia (Léa Drucker) is an actress with the local theater company, starring in things like Bertolt Brecht’s “The Good Woman of Setzuan.” Tension however is in the air, not so much seen directly but glimpsed, nicely reflecting the way children notice disagreements that make them fearful yet curious to hesitantly observe from hidden spaces.

The family’s disintegration follows the usual pattern: Antoine and Aurélia stop sharing the same bed, and while he takes up with his assistant Gina (Chloé Astor), Aurélia falls apart alone. Romain, as the older child, is more aware than Solange of what’s going on so he chooses to skip out to Madrid, leaving his sister without any support. With no one inquiring about her feelings, poor Solange bottles it all up inside until she starts crying while reciting a Paul Verlaine poem in class. Even then, despite her teacher’s concern, her parents’ self-involvement renders them blind to their daughter’s distress.

Ropert’s understanding of how children furtively watch the adults around them, soaking up the friction, is well-observed and the best thing in this otherwise insipid film that perversely discards any shred of naturalism for an outdated and phony ingenuousness. Even the performances are airless, and consequently there’s no emotional investment in a family whose rapport is so clunkily established. Young Springer is the sole actor who exhibits anything close to charisma, but notwithstanding her genuine gifts, this isn’t a role to show off what she can do.

A briefly seen poster of Comencini’s 1966 film “Incompreso” (“Misunderstood”) declares the director’s affinities, and while it’s a lovely film from which to derive inspiration, its style remains very much of the period; Ropert’s attempts at imitation don’t merely fall flat, they feel ridiculous. What purpose does it serve to make audiences question what decade this is set in, unless to underline the unoriginal notion that children suffer when their parents separate? Sébastien Buchmann’s unsubtle zooms and the overall soft palette significantly contribute to this sense of a hollow facsimile, very much matched by the invasive music.