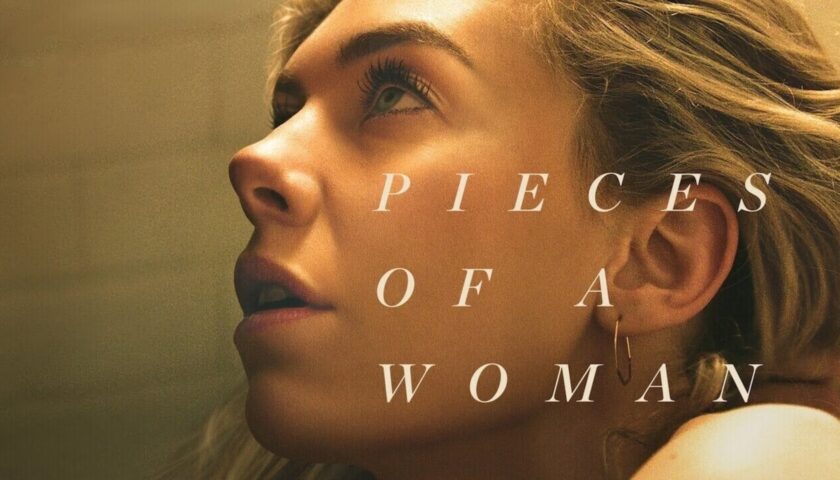 Pieces Of A Woman, Hungarian director Kornél Mundruczó’s first English-language feature, opens with a bang, then immediately sputters. In its harrowing prologue, which depicts a home birth gone terribly wrong in one mesmerizing continuous take, we see a young couple, Martha (Vanessa Kirby) and Sean (Shia Labeouf), plunged into the sudden chaos of delivery. After nearly 23 minutes on edge, Martha holds her newborn baby in her arms for a few blinks of an eye before tragedy strikes and the opening title card hits the screen. The White God director’s latest is meant to be a portrait of grief in the aftermath of a staggering loss. The pain of mourning someone that never truly had a chance to live is complex, slippery, unimaginable. So unimaginable, in fact, that Mundruczó and screenwriter Kata Wéber seem to have difficulty imagining it themselves. The result is a clichéd maelstrom of psychological turmoil and empty outpourings of feeling. The film is uninterested in the inner world it claims to investigate; it also cheapens a woman’s trauma by rendering her pain into a confused dramatic spectacle.

After losing their child, our couple is haunted by the lack of closure. Medical examiners are unable to determine whether the midwife, Eva (Molly Parker), is responsible. Martha is withdrawn, severe, and frigid. To her husband and family’s horror, she insists upon donating her daughter’s body to science. Frustrated by his unresponsive wife, Sean grows violent, reverts to old, dangerous habits, and falls into bed with Martha’s cousin (Sarah Snook), an attorney who launches a criminal case against Eva. Kirby, who won the Best Actress prize at Venice for her efforts, delivers a bleeding heart of a performance. The childbirth scene is a tour de force: all wrenching facial contortions and guttural hollers that contrast with her steely, bitter repression in the second act. For the most part, she’s numb and angry, silently yet visibly rattled by the sight of other children and looks of pity from her co-workers. Yet for all of her simmering intensity, the emotional journey she’s depicting remains vague and disjointed. Who is Martha beyond her pain? Her style of performance—suffering writ large on her face and body—is easily commendable. Yet it lacks direction and as such, feels naggingly empty at its core.

This problem extends to the rest of the film. With the help of cinematographer Benjamin Loeb’s camerawork, the big home birth scene successfully conveys the restlessness and chaos of labor. The single-shot approach isn’t gimmicky in this case because it allows us to witness, uninterrupted and from start to finish, what exactly happened that night. We’re given a front-row view, so to speak, and a spot in the jury stand. To see the rapid pace with which events unfold, and the atmosphere of jittery panic, is to understand how difficult it would be to lay blame on any one single moment or decision made. The film’s courtroom finale hence corresponds to the prologue’s intentions, but it’s tonally jarring, the emotional resolution and cheeseball sentimentality arriving out of left field following the flailing, psychodramatic mid-section.

Instead of peeling back the layers of Martha’s trauma, Mundruczó and Wéber pile on outer conflicts to convey angst and hazy agitation. Martha and Sean’s wildly different expressions of grief poison the couple, unearthing class anxieties (he’s a construction worker, she’s a white-collar executive), pent-up resentments, and squabbles with Martha’s family. Perhaps the intention was a broader portrait of how a single tragedy can unravel entire families and relationships, yet no single issue is given much attention. The most egregious detour comes at a family reunion that inevitably explodes into a full-blown spat between Martha and her controlling mother, Elizabeth (Ellen Burstyn), regarding the need for justice. Elizabeth essentially drops the mic by reminding everyone of her hardships as a survivor of the Holocaust. Burstyn commands the screen with her quivering monologue, but the moment feels overwrought and disingenuous. Its randomness is reminiscent of the scene in Tommy Wiseau’s The Room when Lisa’s mother announces “I definitely have breast cancer” mid-conversation, never to return to the topic.