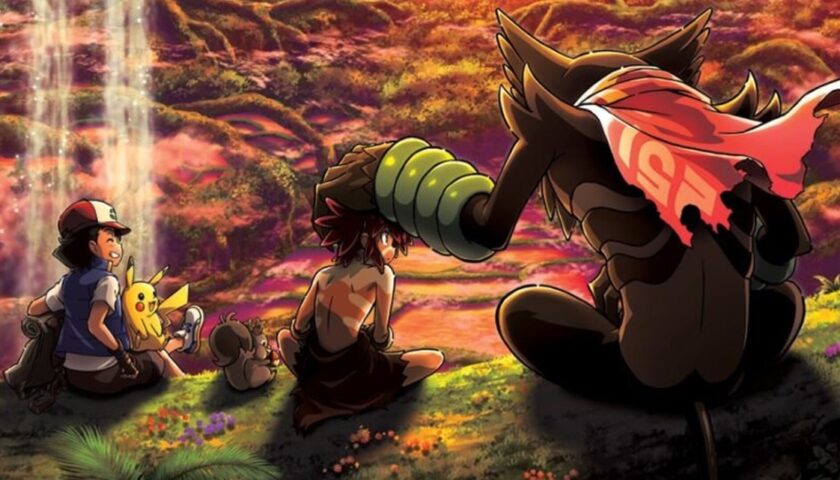 This film directed by Tetsuo Yajima is the 23rd in the Pokemon Universe, which was created by Satoshi Tajiri, the originator of Nintendo’s Pokemon franchise.

It tells us the story of Koko, a human boy raised by a Zarude, a sophisticated Mythical Pokemon in the forests of Okoya.

Just like the Biblical Moses, a baby is found floating in a cane basket on the banks of a river in the jungle by a group of Zarudes. Unable to leave the child on his own, one of them abandons his tribe to adopt him as his son, giving him the name, Koko. Believing the Zarude to be his father, Koko fondly calls him ‘Dada’.

Completely cut off from human society, Koko grows up believing that he is a Pokemon, although he does not resemble them in any way.

Ten years later, Ash Ketchum and Pikachu from the nearby Milyfa Town, while attempting to capture a wild Cormorant in the Jungle, chance upon Koko, who interacts with humans for the first time. This throws his identity into chaos as he begins to question who he is and how he fits into the world.

On a parallel track, there is a research team from a biotech company, headed by a crooked scientist named Dr Zed, who is scouting around in the jungle in the hope of finding the existence of healing springs.

How their lives intersect, and Koko realises his true identity, forms the crux of the narrative.

Right from the opening sequence, you find a familiarity with the narrative of Rudyard Kipling’s ‘Jungle Book’ and you’d be comparing Koko to Mowgli. Except that the twists and turns are wild and raging.

The film indulges you with a current of enchantment, climaxing in a thunderous extended action sequence that dazzles while trying off every lingering plot point and gathering up all the bits of incredible, unpredictable folklore and iconography from the world of Pokemon.

It is for the first time that a Pokemon film has six songs, all written by Tajiku Okazaki. The songs — ‘The Rule Song’, ‘Koko’, ‘Show Window’, ‘The Hum of the Forest’, ‘Strange and Wonderful Creatures’ and ‘I’m Home and Welcome Back’ — seamlessly integrate into the narrative and elevate the viewing experience.

Visually, the 2D computer-generated animated frames are all bright, colourful and appealing to the eye, and the voices of its ace cast brighten the characters and bring them to life.

Overall, if only you’re a Pokemon fan, the film will appeal to you.