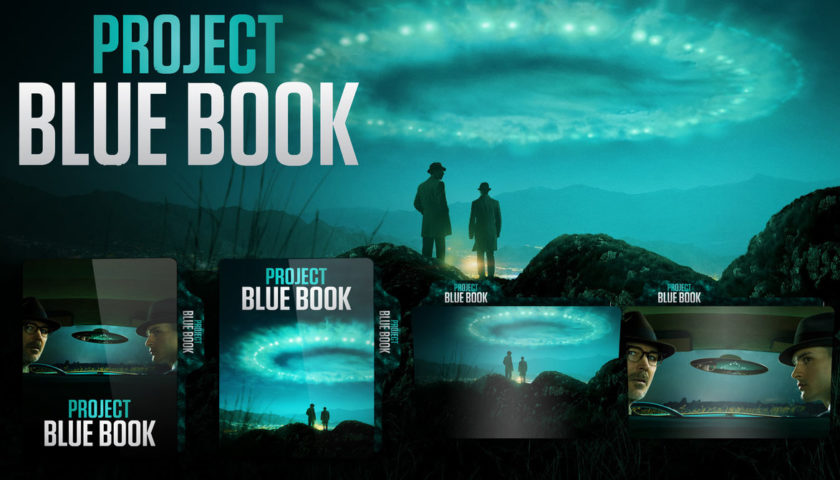 Review: Of all the made-up things lonely people believe in, I must begrudgingly admit that extraterrestrial visitants are the most likely, so I feel I can meet Project Blue Book halfway. Naturally I also think if aliens were to arrive they would take one look at our current society and promptly declare us not worth the effort, but History’s new show would have you believe otherwise. Based on real, hush-hush investigations conducted in the 50s and 60s by the Air Force – the eponymous Fuller Dogfight being one of them – Project Blue Book hopes to convince you that those investigations were decidedly more mysterious than the powers that be ever let on. Spooky!

Well… it’s not that spooky at all, really. The show’s historical details actually work way better than its fiction, at least in part because you can really believe that the American military and government would go to absurd lengths to cover up interesting discoveries. Project Blue Book is actually established with the specific mandate of proving beyond any reasonable doubt that any dodgy sightings and experiences have a perfectly mundane and rational explanation; that UFO was just a plane, that little grey man who stuck something up your arse was just your boyfriend, and so on and so forth.

The Air Force and its attitude are both represented by Air Force Captain Michael Quinn (played by the appropriately-named Michael Malarkey), who is introduced in “The Fuller Dogfight” as a comically buttoned-up devotee of Uncle Sam and his many governmental cover-ups. He’s in stark opposition to Dr. J. Allen Hynek (Aiden Gillen with a suddenly freer schedule since the North remembered), the astronomer hired to consult on the project and assure the public that it’s all baloney.

The problem is that Hynek is an ambitious careerist who thinks that studying UFOs and other such nonsense will do wonders for him professionally, so he’s down for seeing these cases through to their bitter end rather than immediately writing them off, which is not ideal for his tight-lipped superiors, who would much rather he just towed the line. That conflict is the most interesting thing about Project Blue Book and also the thing about it that seems most truthful, even though the cases are at least partly based on real investigations conducted as part of the project.

Those investigations are re-enacted here with charming enthusiasm, and the whole thing is well-done, even if the flashy stuff runs a bit contrary to the political backdrop. Gillen makes for a compelling lead, and his gradual transition from dismissive sceptic to frustrated, shut-out investigator is a fun arc, even if presenting the Air Force as a proudly sinister and secretive organisation will undoubtedly rub folks the wrong way. To compensate, I’m sure the extraterrestrial intrigue will rub certain people just the right way, so it all balances out.

“The Fuller Dogfight” kicks off a show that is reminiscent of The X-Files, then, but a glossier version with a bit more of a historical precedent. It also has the added advantage of courting the dependable conspiracy theorist demographic, which I’m sure the show’s creator, producer, and writer David O’Leary is banking on. I couldn’t say quite how large the tinfoil hat is going to get, but what I can say is that the show, true or not, is quite compelling. There’s enough history here for Project Blue Book to feel authentic and enough mystery to tease a mainstream audience, which is exactly what you want from historical fiction. Maybe something has been discovered here after all.