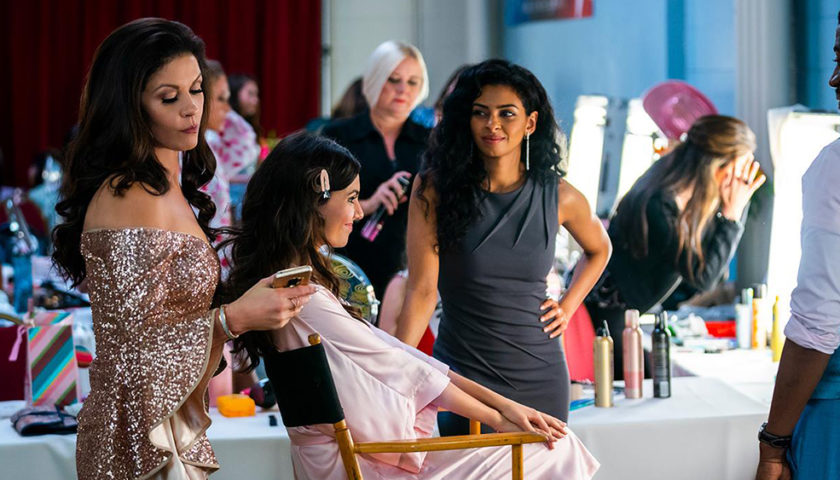 Review:The migration of movie stars to television has resulted in some series that seem divinely ordained — from Nicole Kidman and Reese Witherspoon in “Big Little Lies” to Billy Bob Thornton and Kirsten Dunst on “Fargo” — and others that feel significantly more random. “Queen America,” which forces an Oscar winner to tamp down all that’s best about her persona, is one of the latter cases. Catherine Zeta-Jones is a gifted star whose aura of outsizedness already feels difficult to contain on television — or, for that matter, on Facebook Watch, the finding-its-feet platform on which she appears on “Queen America.” In the series, a black comedy (or is it a drama with occasional jokes?) about the desperate hangers-on in the beauty pageant scene, Zeta-Jones feels constrained by the show’s sensibility and its sour lack of ambition. That she fights as hard as she can to avoid being sucked into the eddy of just-good-enough makes the mismatch between star and show, one of the most striking in recent memory, all the more pronounced.

Zeta-Jones plays Vicki Ellis, a born-and-raised Oklahoman who rose from trailer-park poverty to become the arbiter of taste among the state’s pageant world. The Welsh actress lightly paints a drawl over her remarkably recognizable diction; the resultant effect is rather like hearing two voices speaking in unison. Vicki is too powerful within her tiny world to get mocked for her voice, though: Each year, she coaches the state’s delegate to this show’s analogue to the Miss America contest (bizarrely named the “Miss America Starred and Striped United States”). When her preferred candidate crashes and burns, Vicki is obliged to take on Samantha, a beauty queen (Belle Shouse) whose amateurish, unschooled approach represents a fresh perspective on the age-old custom of girl-on-girl competition. Though Vicki still obsessively controls Samantha’s diet and exercise regimen and has few kind words for her, she comes to soften towards the girl, no easy process for someone whose entire business rests on rigor.

While the milieu may be hard to believe for Zeta-Jones, the character’s control and toughness is a familiar one for her; the star gets to trot out the imperiousness and chilly, regal bearing familiar from “Chicago” and FX’s “Feud.” But Vicki’s icy ambition expresses itself solely through gratuitous cruelty and through Zeta-Jones acting with cigarettes; it’s all too apparent, from the show’s early going, that “Queen America” respects but doesn’t like her or her world. Indeed, the show seems to hate both Vicki and pageants, a sentiment it expresses in the former case by degrading Zeta-Jones (showing her, for instance, binging junk food in a sequence that moves quickly from character-building to outright gratuitous) and in the latter case by imagining a fictional world that could never be. This show’s hapless beauty queen, Samantha, would simply never clear the bar at a competition that measures well-spokenness and élan; she’s written as bumbling and disastrous, and exists only to make the point that competitions like the one she won are shallow and pointless. To bring her into the story to teach Vicki a few lessons about what really matters suggests the creators would rather just be making a show about something else.

After all, no one is obligated to like beauty pageants; I don’t, and don’t watch them for that reason. But a show about them should at least take them at their own terms, and find what inside them is narratively interesting. Chucking whatever is the understandable reality of the format in favor of a story centered around a cruel person gradually coming to see the error of her ways under circumstances that could never happen isn’t fair to the characters, or to the actor who has to sell that transformation. Zeta-Jones was great on TV in “Feud,” in a performance that allowed her to express discontent, callous disregard, and manipulation with velvet subtlety. But that show loved her character. Watching “Queen America” make the case again and again that Vicki is a bad person wasting her time in an industry that needs change will convince you that you agree long before the first few episodes are up. But if she’s a bad person wasting her time in an industry that needs change, why are we watching her story?