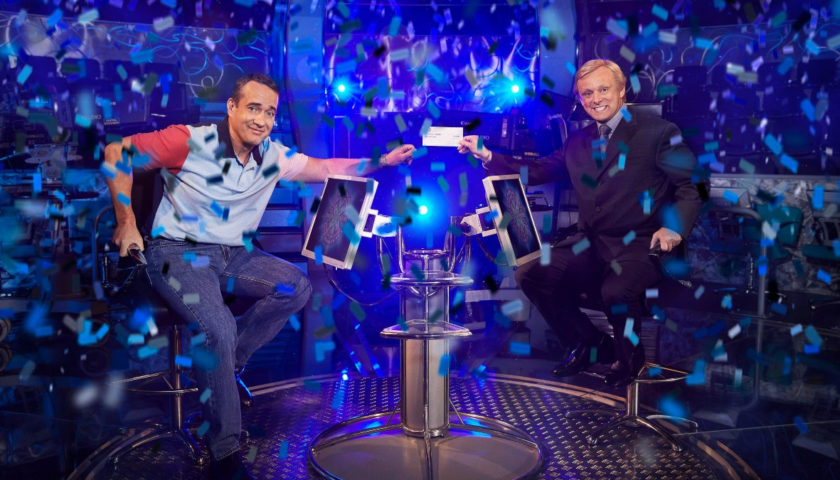 Over the last few days here in the UK the big new thing has been this three episode long mini series called Quiz, I waited and watched them all at once and here is my review for the show. The premise of the show is based on true events where a Army Major was accused of cheating and stealing 1Million Pounds from the popular quiz show Who Wants To Be A Millionaire. Main Character Matthew Macfadyen plays Army Major Chris Ingram on this show and I thought he did a great job in the role. At first you see quite a timid every day man who is very well respected and honourable but as the show goes on you can see him gaining confidence in himself and really standing up for himself in the wake of the accusations.

You also see a different persona when he appears on the quiz show itself as he really plays to the cameras and nails the entertainment side of the game, you aren’t sure whether to root for him but he comes across as pretty likeable so it makes it a tough moral dilemma. Supporting Characters Okay, lets get to the performance that everybody is talking about and that is Michael Sheen as host Chris Tarrant and I swear to you this is a truly memorable performance. Sheen nails Tarrant’s mannerisms and likeness so well it is uncanny. I literally cannot imagine anybody else in the world who could have done as good a job in this role as Sheen does he truly does a special job and it adds legitimacy to the show.

Sian Clifford plays Diana Ingram and honestly this show really makes her out to be the villain of this show, it seems you aren’t meant to root for her and her obsession with winning is what causes this whole incident. She does a good job in her role, though I am not sure the real life person would be particularly happy with her depiction. Mark Bonnar plays the head of who wants to be a millionaire and I thought he did a great job, you see the events through a different point of view with his character and you do care about him and see the damage the other characters have done to him personally and professionally.

Story The story is pretty absurd when you think about it but it is interesting in seeing these people attempt to get away with this act of deception. I have mentioned before how much I love courtoom scenes and this show nails it’s courtroom scenes, the drama is executed greatly whether in these courtroom scenes or the quiz itself. My one complaint is that there are some story arcs that I felt could have been eliminated as they don’t really play into the main plot and feel very tacked on.

Script The script is very good, the drama is well executed and it makes you sympathise for the characters and interested in the situation. The humour when used actually works and helps make the characters feel like real people which helps when your show is based on true events. Style As mentioned the show really nails its style when it comes to the courtroom scenes and the brilliantly tense quiz scene. However, I felt like the show should have started with the quiz and we learn about the situation and the background of the characters after, as the show has a very slow start and it takes a bit of time to really get going. Overall Overall, this is a great mini series that being short is an easy watch and it is an interesting story that has added layers as it happened and is still talked about today.