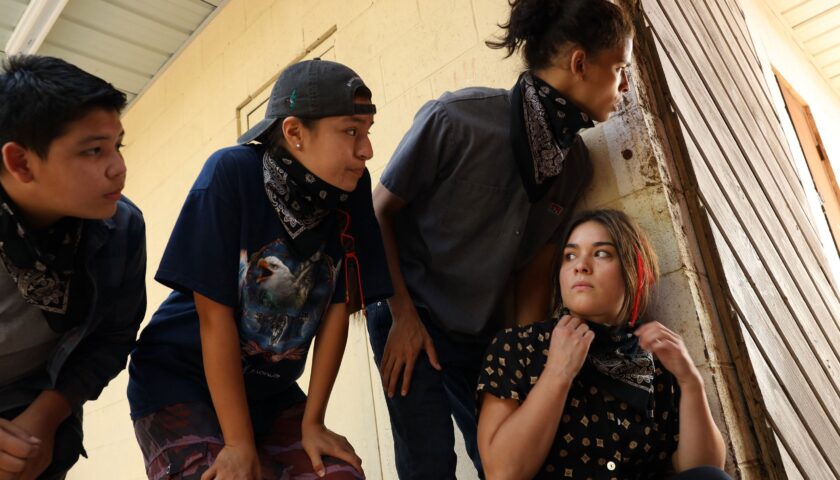 It’s rare to see a series that conjures up a sense of place quite as well as does FX’s new “Reservation Dogs.” The series, set in and shot in Oklahoma with a cast, set of directors and writers’ room made up entirely of Indigenous people, lets us into a world television too rarely goes. The title reservation, a rural place where the only fun is what one makes for oneself, is a place our characters are keen to escape. But it’s also a community where the incidental magic of connection lies around every corner. This show’s ambitions in its first four episodes are narrower than those of FX’s great “Atlanta,” but there’s a similar willingness to push into the crannies of the American landscape and find moments of character worth exploring.

Co-created by Sterlin Harjo, a filmmaker who is a member of the Seminole Nation, and Taika Waititi, the Oscar-winning writer-director, the series follows a quartet that used to number five. The show’s central characters are missing Daniel, their friend who died a year prior; their sense of the area in which they live as uniquely bleak colors their mourning, and makes them motivated to find a way to travel west to California. The group’s ringleader, Bear (D’Pharaoh Woon-A-Tai), envisions a sort of spirit guide (Dallas Goldtooth) who instructs him with a sort of tough love. “Being a warrior — it’s not aways easy. You and your thuggy-ass friends, what are you doing for your people?”

This is a creatively shot bit of wit from a show that — despite the presence of Waititi, whose try-everything sensibility can sometimes overwhelm elsewhere — tends to find its flourishes in human behavior. Bear and his three friends (played with a lovely, natural chemistry by Devery Jacobs, Paulina Alexis, and Lane Factor) face that tug-of-war within every day. History and legacy tells them to be proud, bold, to respect themselves and their community — but that history seems distant given the American tendency to neglect and isolate its Native communities. Together, Bear and his friends work to define their own ethic as a sort of low-stakes squad — which includes schemes to make money like stealing a snack truck, but also a sort of relentless mutual support. Their self-conscious evocation of Quentin Tarantino’s “Reservoir Dogs” is a bit of mythmaking that pushes back against their town’s eagerness to cut dreams down to size.

The rough willingness to tangle for one another cuts across gender — Jacobs’ Elora and Alexis’ Willie are every bit as involved in the cut-and-thrust of small-time scheming as their male counterparts. Indeed, the group seems to be living out a sort of extended childhood, where the reaction to privation and loss of all kinds is to find a way to make it a game. Encounters with elders, like one Dog’s uncle (Gary Farmer) who lives a “tradish” Native life of mysticism or like Bear’s beleaguered but loving mom (Sarah Podemski), suggest the challenges adult life will bring, and why it’s desirable to live in a self-created mythos of kid gang life for a while longer.

But those encounters, too, bring a sense of sorrowful wisdom creeping in around the corners: The adults in Bear and his friends’ lives want to help them stay optimistic and curious and fresh, but also know that the reservation creates its own gravity. One watches “Reservation Dogs” wondering if they’ll be able to break out, but also wondering what other sorts of things breaking out could mean: If not changing one’s location, then putting a stop to old patterns, or discovering a sense of self-worth beyond what white America might assign based on your Indigenous status. In all, “Reservation Dogs” is a lovely, eminently watchable triumph. It’s an overdue tribute to a sort of community it doesn’t mythologize. Instead, the show treats the reservation and its residents on their own terms, as worthy of being explored for just what it is, and just who they are.

“Reservation Dogs” premieres on Monday, Aug. 9, on FX on Hulu.