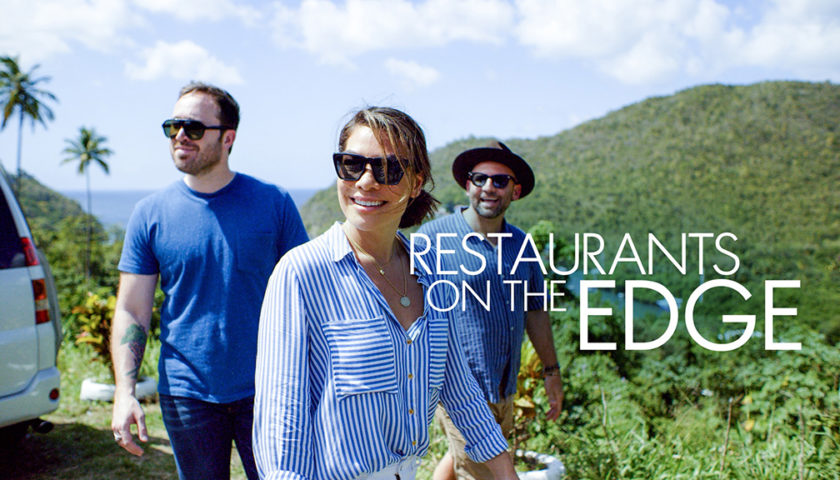 The title of Netflix’s new reality show is a pun: Restaurants on the Edge is indeed a makeover show where culinary establishments get help before they go bust, but the stricken businesses share another quality. They’re all on the edge … of a spectacular view! They’re seaside, lakeside, mountainside or in some other precipitous location that ought to give them plenty of buzz. Their drab decor and bland food are a blot on a beautiful landscape.

Fixing up these disappointing diners is a triple threat of white-toothed enthusiasm. As well as restaurateur Nick Liberato generally refocusing each establishment and chef Dennis Prescott revitalising their menus, designer Karin Bohn is on hand to overhaul them aesthetically. Their energetic positivity, relentlessly supporting and affirming each other and everyone they come into contact with, lets you relax – so long as that sort of sanitised North American gloss doesn’t set your cynical teeth on edge too.

Episode one eases us in by finding the perfect subject for an eaterie-rescue show. In Marsaxlokk, Malta, Justin Haber is a local celebrity, but his harbourside joint, Haber 16, has plunged him into debt. Despite being a professional footballer, he’s still a charming underdog – “I am the shortest goalkeeper in the world!” – and he’s got the one quality we viewers of this format demand: he’s making a load of painfully obvious mistakes, such as shipping all his seafood from abroad when one of the Mediterranean’s best fish markets is on his doorstep. Then we’re off to Hong Kong, where star-crossed lovers Clifford and Charlene have overloaded their cafe with trinkets to the point that it looks more like a bad gift shop, and have also not really told anyone that the place exists.

Every trope comes together in Tobermory, Canada, where a nice man called Michael runs a Jamaican-inspired bar. He’s making two classic errors: his menu is too extensive, and a tough childhood where he had to bring up three younger sisters has left him unable to let go and delegate, so he’s doing everything himself and doesn’t have time to step back, rethink, and stop his dream sliding below the waterline.

Like the Queer Eye guys, scooping lonely schlubs off the carpet and boosting them up, or Gordon Ramsay slapping crappy restaurateurs hard and then slapping them slightly more gently later on, we’re always working towards a cathartic emotional release, as well as a healthy increase in takings. But although Liberato likes to sit down with ailing proprietors and read them one-star TripAdvisor reviews in the hope of making them cry, psychological depths aren’t too deeply plumbed, for fear of tainting the crisp Instagram vibe. Most of the tears are simple gratitude as owners walk back into a restaurant that’s been completely redecorated for free.

For the most part Restaurants on the Edge is, in fact, a travelogue – the middle section of most episodes sees the inept owners disappear for a bit while we tour the locale, meeting artisans and sampling the food scene, which is always humming with earthy produce and delightful authenticity. Geographic range and visual sheen are the draws here. Yes, you could watch Alex Polizzi doing a better job of all this on Channel 5, but there’s a risk she’ll be in Nuneaton or Stevenage, whereas Liberato, Prescott and Bohn are off to Costa Rica and St Lucia.

In its own smiling, superficial way, Restaurants on the Edge does give a pretty good sense of the places it visits, filleting them into cute slices of escapism for the benefit of ordinary folks at home who aren’t likely ever to travel so far in person. The star of the show is Bohn, already a camera-friendly YouTube personality and the purveyor here of smart, straightforward interiors that guarantee a pleasing before-and-after montage at the finish. The show’s much more about airy dreams than proper kitchen nightmares: it’s a pleasing, reliable destination on television’s main drag that’s fine for a quick bite, but unlikely to become a regular haunt.