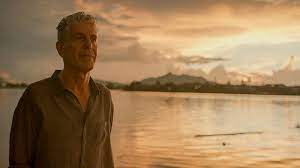 Few humans seemed to move through the world with as much wholehearted ferocity as the chef, writer, raconteur, and television host Anthony Bourdain. So the news that he had taken his own life at 61 landed with a particular jolt; had we really not known or understood him at all?

Three years later, Oscar-winning documentarian Morgan Neville (Won’t You Be My Neighbor?, 20 Feet From Stardom) arrives with Roadrunner – a film that feels intimate enough to ask those questions, and wise enough to know it ultimately can’t. What emerges is a raw, illuminating portrait of a man whose passions ranged as far and wide as his passport carried him, but could also lead to dangerous extremes.

The format of the movie (which premiered last night at the Tribeca Film Festival) is mostly linear, though the narrative largely skips over his early life beyond a few passing references by Bourdain and the brother who survives him. Instead, it pivots on the demarcating line that was the publication of his 2000 memoir Kitchen Confidential: Adventures in the Culinary Underbelly – the irreverent best-seller that would transform him almost overnight from workaday executive chef to bad-boy media darling in his mid-40s.

Extensive footage from that era shows a natural entertainer already coming into his signature persona, but still struggling to navigate the place between rebel-yell antagonist and palatable host of a mainstream TV show. Bourdain is, unsurprisingly, often his own best explainer – a magnetic, magnanimous presence with little filter and seemingly even less preciousness about himself. (He would, he jokes in an early scene, rather be shot out of a cannon at the London department store Harrods or have no funeral at all).

But with great notoriety, of course, comes greater responsibility; as Bourdain’s travels took him to some of the world’s most troubled places  – he and his crew, famously, found themselves suddenly immersed in a full-blown Israel-Hezbollah war during a 2006 visit to Beirut, and put it on screen – it also pricked his conscience deeply. And he seemed increasingly willing to trade the home life that anchored him, including a young daughter, for those pursuits.

The majority of the movie is not grim by any means: Colleagues, family, and friends, including chefs David Chang and Éric Ripert and musicians Iggy Pop and Josh Homme, have enough wild stories to fill a bar till closing time.  But it also shows the damage that his sometimes manic fixations – one year it might be jujitsu, the next a love affair – and almost pathological search for the next thrill could do. Was he a seeker, or just a man running away from himself?

As the story moves towards its inevitable end, the ache and displacement of Bourdain’s final days become painfully clear. But Roadrunner, steeped in the jittery punk-rock style and verve of its famously omnivorous muse, registers as more than a requiem or a postscript. It feels like an essential document­, created in the radical no-reservations spirit in which he lived.