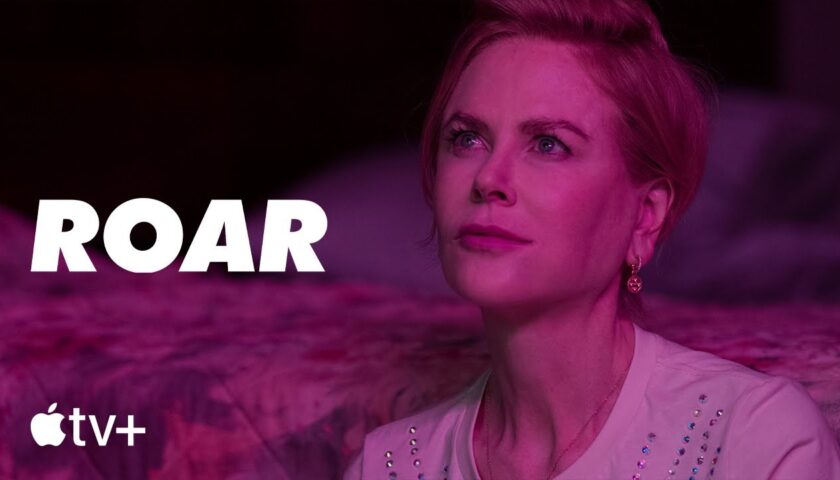 In our modern age, where audiences demand a never-ending stream of their preferred story (or, at least, many services promote such consumption), episodic anthology series can be a tough sell. People don’t want to watch one episode of something, only to start over 30 minutes later with a new set of characters in a new setting with new stakes — or, depending on your faith in humanity, networks don’t want to risk losing subscribers by providing a quick, clean ending, rather than lock them in for 11 hours. After all, when you’re beginning anew every episode, the odds that they’ll all be of equal interest, let alone quality, drop off.

“Roar” is the latest addition to the resistance, as well as one of the era’s best members. Created by Liz Flahive and Carly Mensch (of “GLOW” acclaim), the eight-episode Apple TV+ series functions similarly to its source material — Cecelia Ahern’s 2018 book of short stories — as a collection of fables. Each half-hour entry tells a fanciful tale of one woman’s journey toward deeper fulfillment (more or less). Some episodes skew toward scares (like Cynthia Erivo’s body horror story or Issa Rae’s culture theft allegory); others are comedies with an edge (like Alison Brie’s critique of TV crime shows or Meera Syal’s marriage satire); some are just plain weird, like when Nicole Kidman starts eating photographs or Merritt Wever romances a duck.

But the series finds a unifying, even driving force. Rather than lean on heavy drama or be happy experimenting for experiment’s sake, “Roar” is clear-eyed in its messaging and enthusiastic in its approach. Each tale carries an admirable purpose and evokes genuine curiosity, both as each episode unfolds and in anticipation for what the next entry could bring. As a portrait of women, “Roar” recognizes the specificity in individual identities while casting relatable perspectives on motherhood, relationships, career-building, and more. It’s as easy to love as it is to admire — and neither feeling fades over the rewarding first season.

To say too much about what happens in each episode can be inhibiting, but here are a handful of highlights meant to tease as much as extol:

– There’s a “GLOW” mini-reunion in Alison Brie’s episode, as Chris Lowell plays detective (alongside Hugh Dancy) in an entry that doesn’t just criticize the machismo driving many “dead girl” crime shows, but offers a practical alternative for the genre moving forward.

– Speaking of “GLOW,” Betty Gilpin’s half-hour offers a) Betty Gilpin, b) Daniel Dae Kim, and c) an ending that you’ll have to sit with for a bit before clicking to the next episode.

– Nicole Kidman eats old photographs. This is not a spoiler. The name of the episode is “The Woman Who Ate Photographs.” (But it’s an excellent performance, especially for those who love hearing the Aussie’s natural accent.)

– And for those who love Kidman’s 2004 film “Birth,” you’ll adore Merritt Wever’s entry — which Kidman fought to include, in her role as executive producer.

– I cannot and will not pick a favorite, but I used to immediately associate Cynthia Erivo with “The Outsider,” and now I’m almost certain my first thought will be this.

Many of the treats waiting within “Roar” are self-evident. Just from the top-billed stars, it’s clear Flahive and Mensch have assembled a series where performances will be a strength, but seeing who emerges in supporting roles flexes their deep appreciation for character actors (and the talents of casting directors Richard Hicks and David Rubin). Offscreen, there’s just as many notable names. Besides the two showrunners, who write or co-write five of the episodes, writers include “Atlanta’s” Janine Nabers and playwright Halley Feiffer, while So Yong Kim, Rashida Jones, Quyen “Q” Tran, Anya Adams, and more make for a formidable directors’ unit.

Still, part of what elevates “Roar” above other episodic anthologies is its spirit. Like “GLOW,” there’s an encouraging aura to every episode that’s pervasive even when single narratives offer more ambiguous conclusions. Tones and takeaways may change, but the show’s consistent howl is motivating. “Roar” recognizes how much time it has to deliver its messages, making the most of its 30 minutes, each and every time.