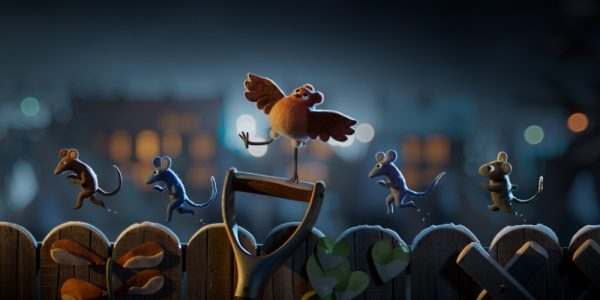 When her egg fortuitously rolls into a rubbish dump, Robin is raised by a loving family of mice. As she grows up, her differences become more apparent. Robin sets off on the heist to end all heists to prove to her family that she can be a really good mouse – but ends up discovering who she really is.

Bristol based Aardman have been a mainstay in British Cinema since the 1970s and celebrates its 50th Anniversary next year. The studio are responsible for some of the most iconic British animated franchises including Shaun the Sheep, Wallace & Gromit and Chicken Run. The group’s latest is the festive musical Robin Robin which depicts a Robin separated from her family raised by a group of sneaky Mice who are constantly searching for food to feed the family. The film is co-directed by Michael Please and Daniel Ojari who were in attendance at the film’s premiere at the London Film Festival along with Sarah Cox at Aardman who was an Executive Producer on the film.

At 30 minutes this isn’t a feature length film, although it sounds like there are plans to make greater use of these characters going forward. Aardman are certainly no strangers to shorter films having made their name with the likes of A Grand Day Out, The Wrong Trousers and A Close Shave.

The animation moves away from the traditional Claymation used to great effect in the Wallace & Gromit franchise especially, this makes this feel different to other Aardman projects but it is still wildly inventive and tremendous fun. In a series of firsts the film also is the studio’s first musical project and moves away from their partnership with the BBC which saw the premieres of the Wallace & Gromit shorts and other projects. The songs are used to great effect and sure to get stuck in audiences heads being fun and used to service the story.

Robin Robin is fun throughout and from the discussion afterwards that this a real passion project for the directors and this shines through in every frame with this being a lovingly made and hugely entertaining film. The animation as one would expect is gorgeous and the voice performances from Richard E. Grant as Magpie who takes Robin under his wing and Gillian Anderson as a menacing cat are first rate. Grant brought a number of laughs in his scenes and he was clearly having a blast recording his lines. Robin herself is voiced by star Bronte Carmichael who was also in attendance at the premiere; she gives a very earnest and energetic performance, bouncing off her more established co-stars fantastically and even more remarkably given much of the recording was over Zoom during lockdowns.

The humour works wonderfully well for both adults and children alike with some fantastic visual gags and one liners, the sequences where the mice and robin try to steal from humans are bold and inventive. Far from Magpie doing all the heavy lifting, there is a real sense of charm and fun to almost all the characters and for a film that is only half an hour, this speaks volumes for the dedication and effort put into making this a heart-warming tale that is sure to go down a treat over the Christmas period.

This is certainly one of Aardman’s strongest efforts in recent years and for a studio that has earnt such a level of consistent acclaim that is high praise, this showcases how brilliant a creative team they are for both shorter and longer form films. These characters are sure to become firm favourites and I for one cannot wait to see what adventures they get up to next.