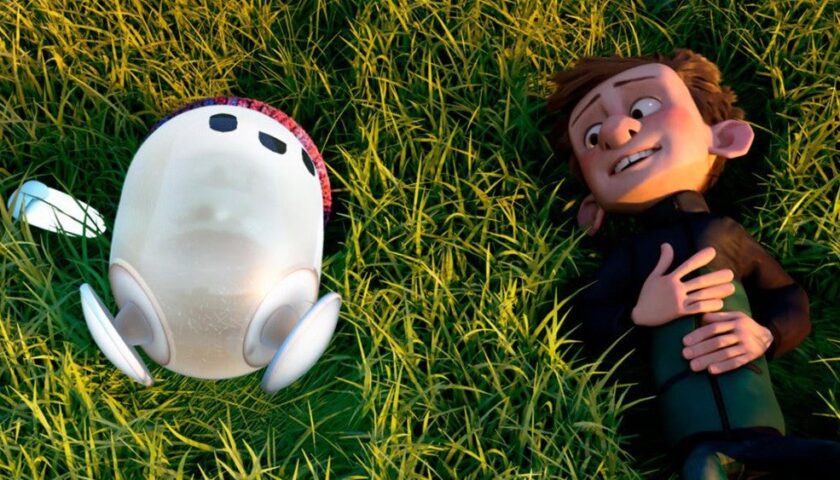 “Ron’s Gone Wrong” is a movie for everybody who ever felt as a child like they had to settle for the janky, knockoff version of the toy they really wanted. Perhaps all your friends got the new iPhone, while you were stuck with an older sibling’s hand-me-down flip phone. Or, in my case, I can recall a time when it seemed the whole world had Super Nintendos, but I somehow wound up with a Sega: The console didn’t have “Duck Hunt,” “Super Mario Bros.” or any of the cool games, and nobody wanted to come over and play. Clearly, I survived, but the chip on my shoulder never fully healed.

“Ron’s Gone Wrong” recognizes that sense of disappointment, transforming it into comedy. Its misfit main character, Barney Pudowski (voiced by Jack Dylan Grazer), feels similarly deprived. A jug-eared, knobby-featured seventh grader who goes to school with chicken feet in his lunchbox, Barney has serious trouble making friends. And then along comes an invention called a B*Bot that promises to solve his problems.

Mass-produced by an Apple-like company called Bubble, the BBot is a pearly white contraption that looks like a cross between EVE (of “Wall-E” fame) and a 20th-generation iPhone. A BBot is supposed to like all the same things its owner does, helping to document and share their happiest memories to social media, thereby enabling them to attract more friends. At least, that’s how it’s meant to operate.

A fun, snappy, tongue-in-cheek toon, “Ron’s Gone Wrong” opens on Barney’s birthday. All the other kids at school already have their own B*Bots, and Barney desperately hopes there might be one wrapped up and waiting for him when he gets home. But Dad (El Helms), who’s loving but oblivious, doesn’t know what his son wants and gives him a rock-collecting kit instead. Womp womp.

Recognizing Barney’s disappointment, Dad and Bulgarian grandma Donka (Olivia Colman, delightfully off her gourd) rush down to the Bubble store and haggle for the only B*Bot they can get: a reject that fell off the back of the delivery truck. Barney is beside himself the next morning when he discovers that he got his wish after all, promptly naming the virtual companion Ron (Zach Galifianakis) … until he powers on the robot and realizes that the thing doesn’t work right.

That’s the moment where this movie — an uneven yet entertaining first feature from London-based Locksmith Animation, which had a deal with Fox before the studio got gobbled up by Disney — could have gone a hundred different directions. Rather than picking one clean storyline to follow, Locksmith co-founder Sarah Smith (a veteran of Britain’s comedy establishment) and writing partner Peter Baynham (who, like Smith, cut his teeth working with Armando Iannucci) seem determined to juggle them all — all but the one where the robots go rogue and try to wipe out humanity, that is. “The Mitchells vs. the Machines” got to that one first, and yet, “Ron’s Gone Wrong” still winds up asking its characters to infiltrate the parent company’s HQ in a finale that’s much too close for comfort.

But let’s not get ahead of ourselves. Releasing the same month that Facebook has been raked over the coals in front of Congress after a whistleblower leaked documents demonstrating the company knew and exploited all the ways its services are unhealthy for kids, “Ron’s Gone Wrong” shares the view that technology might be detrimental to a child’s development. That leaves plenty of room for Smith and fellow helmers Jean-Philippe Vine (a veteran of both Aardman and Pixar studios) and Octavio E. Rodriguez (who gets a co-directing credit) to riff on how today’s kids are becoming over-reliant on their devices.

The villain here is a tubby, mock turtleneck-wearing Bubble exec named Andrew (Rob Delaney) — basically Steve Jobs as Satan — who dreams of using the B*Bots to harvest consumer data from their owners. But Ron is operating offline and threatens to bring down the company’s stock price, ergo he must be crushed.

With plenty of fun bonding scenes between the boy and his bot, “Ron’s Gone Wrong” plays a lot like an update on ’80s hit “Short Circuit,” wherein Galifianakis’ no-filter shtick proves an ideal match for an A.I. missing 98% of its code. Since Ron’s brain is broken, Barney must start from scratch trying to teach the device how friendship works. Without the usual safety locks in place, Ron can attack the bullies who’ve been harassing Barney and do all sorts of things that a properly functioning B*Bot shouldn’t.

Apart from a knit cap perched sideways on his “head,” the Ron character is little more than a glowing white capsule with a rudimentary smiley face — two 8-bit eyes and a semi-circle mouth — which pushes the animators to get creative about expressing the full range of his personality. Ron’s screen glitches at regular intervals, while his movements are endearingly buggy (his detachable arms are constantly falling off), making for a memorable character. Like cult favorites Stitch or the Iron Giant, there’s a good chance that Ron will have more of a life in spinoff merchandise than he does on-screen.

Still, it’s a shame that the mile-a-minute plot of “Ron’s Gone Wrong” isn’t more focused. Smith and Baynham (who collaborated on two earlier Aardman features, “Arthur Christmas” and “The Pirates! Band of Misfits”) would have done well to slow things down and spend more time exploring Barney and Ron’s offbeat dynamic, rather than obsessing over what Bubble thinks of the aberration. The climax finds Barney doing exactly what the company has been accused of, forcing a one-size-fits-all idea of friendship on everybody. But that’s the paradox of so many of these cartoons, with their heavy-handed corporate critiques: When test-marketed, four-quadrant confections ask kids to be skeptical of consumer culture while simultaneously urging them to buy the toys, one can’t help questioning the sincerity of their message.