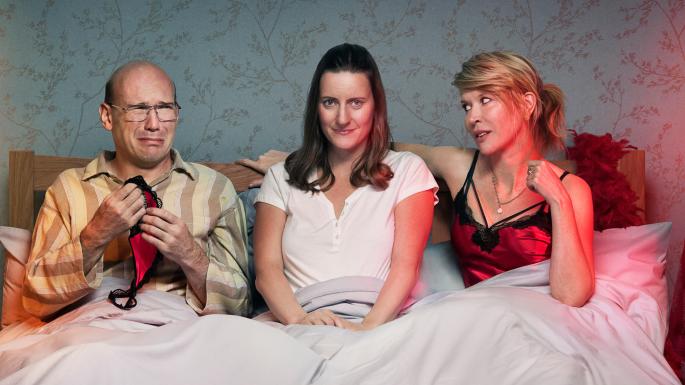 Review: Ever since I first heard them, I have been trying to unhear them. But still, two years on, when I am awake at the witching hour, two lines from Camping creep out of the rank oubliette of my memory castle and into my tender conscious mind. Once in there, they try to force me to decide which is worse: “Mummy’s stinky was bald,” or “Her urethra was very fat and raw.” Sometimes, for light relief, the haunted face of Tom (Rufus Jones) being forced to go down on Adam (“Mmpf – it’s like a hammer!”) will emerge and my laughter will chase the devils away, but otherwise it’s a long night.

So it was with a strange mix of abject fear, dread, delight, anticipation and soft weeping that I greeted the news of a new series from the appalling genius that is Julia Davis. And it was with trepidation and strong drink that I sat down to watch last night’s first episode of Sally4Ever, starring Davis as the reckless, manipulative partygirl and nightclub singer Emma, who insinuates her way into the life of meek office worker Sally (Catherine Shepherd) after a torrid few nights together. Sally has recently, and reluctantly, become engaged to her long-time boyfriend David (Alex Macqueen, who played Edmund in Hunderby, and oh! for the halcyon days when “bubbly milk” was the worst thing I had ever heard), who refers to “bickies” and “intercourse”. The proposal scene (“Pleeeeease says yes, Sal, pleeeeeeease!”) is drawn out long enough to provide an enforced, full 360-degree inspection of the self-delusion, emotional agony and humiliation humans can experience and inflict on each other. It is a reminder that, when discussing Davis, new words for “black” and “comedy” need to be found. As are the foot-moisturising scene, the masturbation scene (“Could you watch?” “Do you mind if I don’t?”), the singing scenes, the egg-marketing office scenes and all points in between.

Moving to Sky Atlantic from the BBC has meant that Davis has kept all her creative control and fashioned another wholly sadistic half hour that leaves the viewer skewered and writhing in exquisite agony, the actual jokes and laughter highlighting the pain at the same time as they afford you just enough relief to carry on. The zenith – or nadir – is the extended sex scene between Sally and Emma that confirms Emma’s lesbian awakening and encompasses all its creator’s greatest hits: intimacy viewed through a corrupted lens, a lingering look at bodily fluids and functions you would rather glance swiftly over, parodies of screen conventions, alongside somehow (given the unremitting physicality of the activities) a flaying of the soul.

Sally breaks off her engagement to David, even though he has offered her his mother’s wedding dress to wear (stained, by “her overactive gland”). In vain does she try to explain that she still loves him but is just not attracted to him any more. “Since when?” he asks, snivel-whining in a manner that somehow still manages to wrench your heart. “I don’t know,” says Sally. “The last seven years or so?”

In the final scenes after David has left the near-marital home, Emma confesses her impending homelessness to Sally, who evades the implied request but lets her in when she sees her standing outside her house later that night in the rain. If you find yourself shouting “Don’t, she’s a MONSTER!” at the screen and not knowing quite whether you are meaning Emma or Davis herself, you are not alone.

There are certain visuals now lodged for ever with the bald stinky and fat urethra in the dungeon of my mind, ready to prey upon me in the wee small hours. I don’t know whether to laugh or cry, but it doesn’t matter. Davis is sui generis and you are free to respond to her as you see fit. The only thing that is not in question is that she is a woman of singular vision – a disgusting, hilarious, agonising vision, but singular – and has the actors to realise it perfectly. Macqueen deserves a special mention for building David out of a part that is about 90% animal noises (yelps of pain, whines of discomfort, groans of self-provided pleasure).

Tom, Adam’s hammer – please come and chase the devils away.