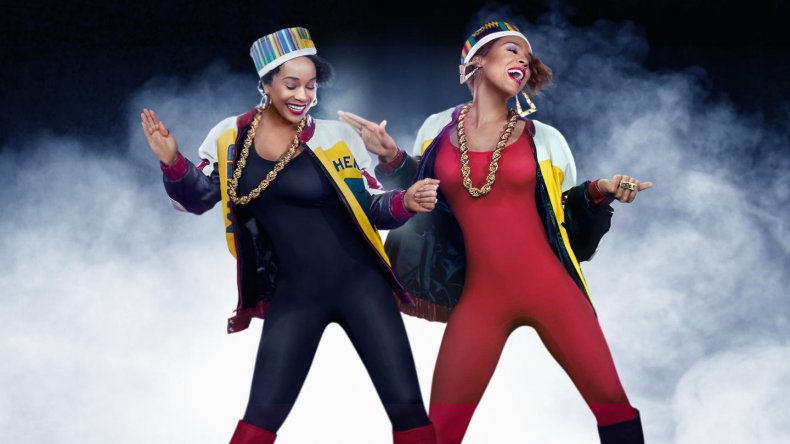 Ooh, baby, baby, Salt N Pepa’s here! This week, Lifetime continued its string of made-for-TV movies with Salt N Pepa, a biopic about the famed hip-hop group. The two-hour Salt N Pepa movie tracks the group from their early days on the New York music scene to their meteoric rise, as well as their quest to become the first female rap group to achieve gold and platinum record status. “Push It,” indeed.

Fans of the iconic group will have plenty to enjoy in Lifetime’s Salt N Pepa, but given the overcrowded nature of the streaming landscape, it’s possible this biopic may have slipped through the cracks of your queue. If you missed the Salt N Pepa movie the first time around, you’re in luck: here’s everything you need to know about Lifetime’s new biopic!

WHAT IS THE SALT N PEPA MOVIE ABOUT?
According to Lifetime’s official description, Salt N Pepa (stylized Salt-N-Pepa) “details the journey of Queensborough Community College students Cheryl ‘Salt’ James and Sandra ‘Pepa’ Denton as they enter the world of rap and hip hop.” The biopic tracks Salt and Pepa as they experience their first success and quickly rise in the ranks of the music world to become the first female rap act to go platinum, an experience that paves the way for a new generation of female rappers.

SALT N PEPA MOVIE: WHERE TO WATCH
Salt N Pepa first premiered Saturday, January 23 on Lifetime, but if you missed it, the network has made it easy to catch it again. Lifetime is currently streaming Salt N Pepa online for free (yes, free!) with no cable log-in required, so fans can easily check out the film as many times as they’d like.

Cable customers can also catch Salt N Pepa as it re-airs on Lifetime throughout the week, including on Thursday, January 28 at 8/7c.

IS SALT N PEPA ON NETFLIX?
As of now, Salt N Pepa is not available to stream on Netflix. However, Lifetime titles do sometimes make their way to Netflix, so keep your eyes peeled!

WHO PLAYS HERBIE FROM SALT N PEPA?
Technically, his name is “Hurbie,” but there’s a lot going on in Salt N Pepa, so we’ll forgive it. Hurbie Azor, the music producer who launched Salt N Pepa’s career, is played by Cleveland Berto. Fans may recognize Berto from his appearances in popular projects like Shameless, Lucifer, and Terminator: Dark Fate, in which he played T. Gill.