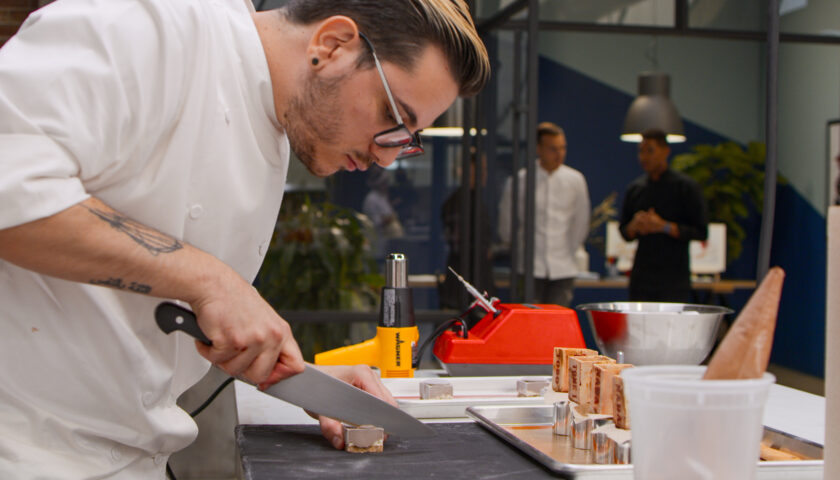 Honestly, I hate these shows. The horrid “other” host, there because they don’t think the expert being an expert is ‘dramatic’ enough… the annoying af editing that shows everything NOT important to the task… the oh so dramatic PAUSE whenever a decision is made… the weirdness of the tasks that couldn’t even be created in such a short time frame by seasoned pros… sending people home based on ratings politics over skill (yes showrunners we know this is happening)… and obnoxious attitudes enhanced in the editing room for the sake of those politicized ratings. Normally you can’t get me to click within an arm’s length of a reality show.

But this is chocolate. And Chef Amaury. This show is quite honestly just good television. There is drama because it’s a kitchen, but moments that would normally have operatic infused faux momentum attached are handled instead with a relative storyline and properly paced editing. The host IS the teacher, and he is not only fantastic but he is KIND and he knows his stuff. The outtakes are there but not spliced with nostril closeups of the most dramatic players or contrived crying scenes.

Mostly my favourite part of the show is that you feel like you are actually a fly on the wall (heaven forbid) of a French patisserie academy and you are getting a glimpse of their year end assignments. Difficult to execute but with purpose and a properly laid out game plan. There is a competitive air but not one that overshadows the group dynamics that would authentically create both drama and emotional up’s and downs.

Most of all the point of the show is not dropped to the floor of the editing studio in post. It’s the perfect mix of seeing a master at work and being given ample opportunity to ask “what would I do in that situation if that were me?” which is a lot of why people watch a REALITY show in the first place. Perhaps we need a new approach. We can have True Reality (True Crime is doing well, right?) and R. Drama… “reality inspired” drama, for those who like Real Housewives, Selling Sunset and those Kardashian wannabes. Because I reeeeally hope we see more of this.