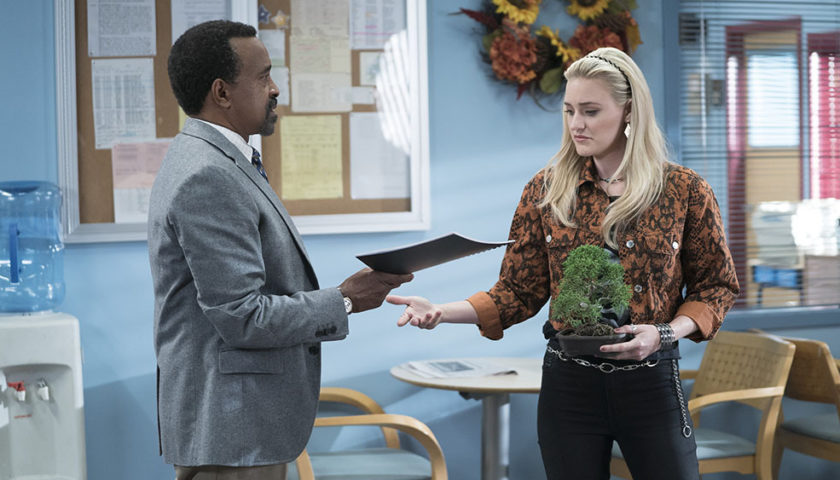 Review: ABC’s recent tradition of family-friendly half-hours continues with “Schooled,” a half-hour spinoff of period comedy “The Goldbergs” that moves character Lainey Lewis (AJ Michalka) into adulthood, where she’s returning to her high school to teach music to a group of jaded ‘90s kids. The show’s action transpires, coincidentally or not, during a golden era for sitcoms that tweens, teens, and parents could watch together, one in which ABC broadcast shows including “Step by Step” and “Sabrina the Teenage Witch” (in its pre-Netflix incarnation, when Sabrina’s powers were cute, not demonic). Given its setting and its premise, so simple as to be a throwback, it’d seem like “Schooled” is set up for, if not greatness, than at least amiable, “Hanging With Mr. Cooper”-style competence.

But for all the references to late-20th-century culture crammed into the first installment—the pilot’s plot hinges, at different points, on a bottle of much-pilloried malt cooler Zima and on Phil Donahue’s episode on “moshing”—it’s a letdown. The pilot lacks the snap and vigorous, unruly wit of ABC’s most successful recent sitcoms, from “Black-ish” to “Speechless,” saddling more than one actor with painfully earnest dialogue about what it means to be a teacher and Michalka with a less-than-credible arc. Her story, indeed, resolves so tidily by pilot’s end as to raise the question of where the rest of the show can still go.

We breeze through Lainey’s backstory—all that’s happened to her between “The Goldbergs” and “Schooled”—swiftly at the top of the episode. Indeed, this bit of exposition, depicting Lainey as a desperate gigging musician whose proximity to success is close enough to be all the more galling, is funny and, crucially, well-paced. One misses that brisk wit once Lainey takes her place at her old school. There, she’s neither a good enough teacher for it to make any sense that she’d be a teacher nor bad in interesting ways. She unilaterally, and so bizarrely as to deflate any viewer interest, decides a student who sasses her should be expelled, and ends up getting in a benign and non-threatening sort of trouble with her principal (Tim Meadows). Does she end up convincing him of her teaching talents, albeit through a less-than-conventional method? Well, did “Boy Meets World” air after “Family Matters”? (It did.)

“Schooled” may well relax as it goes on, but its first episode feels painfully strained, pushing us first to see Lainey as humorously unfit for her job and, within 20 minutes, perhaps better-suited than anyone could have predicted. That she’s evidently just borderline OK, and that the situations she’s moving through are ginned up by both goofily over-the-top excoriation and, later, syrupy rhetoric over the virtue of great teachers, feel like evidence that the story “Schooled” wants to tell hasn’t been thought through. Educators are, indeed, under-rewarded and uniquely giving individuals; this show doesn’t make that case through the airless unreality of its story before it deploys multiple lectures about the value of teaching and an end-of-episode onscreen dedication to the teachers of the world. A show that values teachers quite so much needs, quickly, to pivot toward a more interesting way of depicting them.