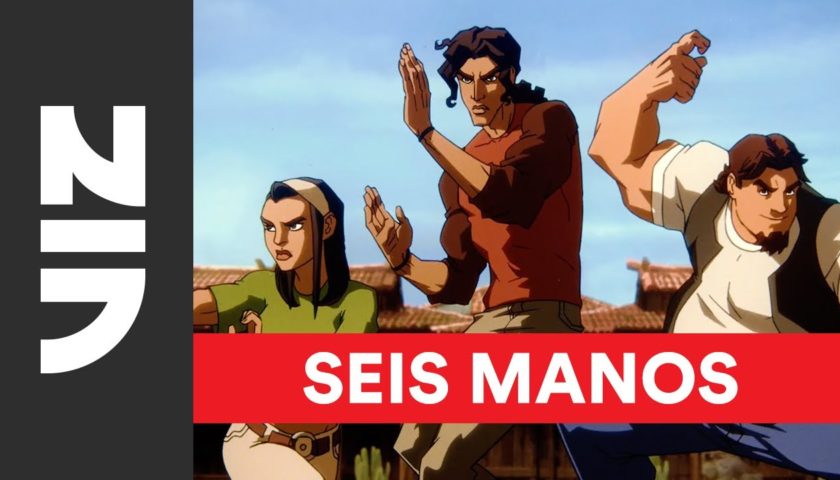 Seis Manos came as a slight surprise. I love Kung-fu movies, I loved Powerhouse Animation’s previous work on Castlevania, and the fact that it was making such a point of speaking to experiences not often glimpsed in animation made me very excited to give it a whirl. After having binged its eight episode first season, I can definitively say that the show is an immensely entertaining Grindhouse gore-fest with passion and effort shining radiantly out of its every frame. I have my gripes, but the love put into this show cannot be denied.

Seis Manos is a tribute to every kind of 70s exploitation film under the sun. Consciously aping the aesthetics of grindhouse (down to a mock film grain and a few funny instances of the projector having to be readjusted), it excitedly throws together Shaw Brothers Kung-fu, Latinx gangster films, occult-based horror and even Blaxploitation into an addicting stew. The scripts by Alvaro Rodriguez and Daniel Dominguez are constantly tossing new ideas and genres at the wall in a frenzied flurry. The show moves at a breakneck pace and never once slows down. And the overall direction is conscious of character and similarly impassioned, excitable. Every part of the show is made with attention and a childish, beautiful adoration for all its component parts. It’s infectious. Back it up with an energetic score that recalls the moods of classic adventure films, and you have a dynamic style that hooks the viewer and never let’s go.

But genre pastiche and lively presentation can only get a story so far. Thankfully, Seis Manos also sports a fun, likeable cast of varying and distinct personalities. Though classical archetypes (Jésus is goofy comic-relief, Isabela is the responsible team mom, etc.), each is given a distinct voice and a clear central struggle that makes each of them easily understandable and innately compelling. It also helps that each of them is backed by terrific VA work. Danny Trejo lends his iconic, gravelly voice to an utterly imposing and terrifying villain in El Balde, Mike Colter endows Brister with the smooth likability one would expect of a Blaxploitation hero, and Jonny Cruz and Aislinn Derbez fill out Jésus and Isabela with authentic humanity.

The remarkable thing about Seis Manos, however, is its deep, beating heart. There is an entire episode dedicated to processing the grief wrought by the death of multiple townsfolk and the main three’s master. That is not a common thing to find in an action show, and it speaks to an interesting set of emotional values. This is best exemplified by the character of Silencio, the most complicated and difficult personality in the show. He’s someone being eaten alive by rage and lingering trauma, quick to anger and eventually quick to bloodletting. And yet he has wrinkles, shades of showing someone deeply caring and empathetic behind his capacity for violence (like in a flashback scene where he gets rid of a feral cat constantly digging up a bird buried by Isabela, in order to give her catharsis). Its this battle inside Silencio between his desire for vengeance and his kinder, gentler, more caring aspects that is the real emotional meat of the show, and its most resonant central conflict. It’s these more deeply felt aspects that make Seis Manos something truly remarkable.

Of course, Seis Manos’ main promise is getting to watch beautifully drawn character models kick the crap out of each other. Does it deliver? Do you even need to ask? Powerhouse has made a career of animating carefully choreographed, beautifully flowing action, and Seis Manos might be their greatest achievement yet. Every hit lands with the power and crunch of a truck barreling into a wall. The choreography is smart, deliberate, and exceptionally thoughtful, with the clear thought process of our characters being illustrated in every move they make and every tactic they use. Each episode contains at least two and maybe more moments of jaw-dropping spectacle that are so raw and captivating they are almost begging to be looped. The fact that this amazing action flies from the fists of almost entirely Hispanic protagonists only makes Seis Manos more special.

But Seis Manos is certainly not without its issues. For one, the series makes a lot of narrative decisions that I personally do not understand. Exhibit A of this is a character named Domingo, a precocious street urchin who asks to train with Chiu and the others after watching them from afar. He’s an audience perspective character meant to get us acquainted with the premise of the show but he dies at the end of episode one, after a good chunk of the run time is spent treating him as the center of the action. The problem is so much narrative energy is spent on establishing Domingo’s relationship with the other characters that, when Chiu dies, (i.e, the catalyst for most of the events in the series) the audience hasn’t spent enough time with him and his to have a real, emotional reaction to his death, and understand why our three protagonists are so destroyed by the loss (especially when the next episode is almost solely focused on how our protagonists cope with his passing). There are a lot of moments like this in Seis Manos; moments where a lot of narrative energy and time are spent on things that, in the long-term plot arc, don’t matter all that much.

The plot is also pulled in a few to many directions. The genre-meshing, though mostly compelling, sometimes means the parts don’t stick together properly, best exemplified by the character of Brister whose plot and character mostly feels distant from the main action of the show (and who also exhibits a lot of casual misogyny and slight racism toward Officer Garcia that feels a smidgen tasteless). Towards the back-end, there are so many plot elements running concurrently in a single episode (the search for immortality, Sifu Chiu’s secret backstory, the battle for Silencio’s soul, demon possession, a crime war, the DEA being corrupt, and so much more), none of it properly connecting, that I lost investment. It feels like Seis Manos just had too many ideas to cram into its eight-episode length, and this results in an admirably busy show that sometimes stretches itself a little too thin.

The series has major problems managing its tone as well. Going back to Domingo for a moment, there is not much of a reaction to his death. He goes almost completely unmentioned until the very last episode. This is a brutal, horrific, uniquely twisted death and it doesn’t have any bearing on the emotional state of our protagonists. In fact, there is a lot of cruelty and death in Seis Manos, and almost none of it has the impact it should. Some of this is due to constant quipping (one particularly egregious example being when Brister and Officer Garcia are cracking wise while San Simon’s mayor is horrifically brutalized right in front of them), and some of it is just completely contradictory tonally. There are a several sets of deaths towards the last few episodes that feel utterly gratuitous and needless, completely at odds with how the show has been carrying on to this point, and even playing into toxic tropes regarding the disposability of female characters (though I do understand that some of this part-and-parcel with the exploitation films Seis Manos takes after, but that doesn’t make it feel any less dissonant or off-base). And though the last episode does synthesize its many competing tones with actual severity and stakes, Seis Manos’ overall tonal disharmony left a bad taste in my mouth.

It is a very exciting time to be a fan of animation. Between series like Bojack Horseman finally cultivating an audience for the adult drama and shows like Castlevania and now Seis Manos taking anime styles and spinning them off in new and unique directions, we are seeing spaces carved out in Western Animation that would never, ever have been seen ten years ago except in the deep of the night on Adult Swim. Seis Manos shows us Mexico and its citizens as the heroes of a fun and sometimes deeply impactful story of violence and vengeance, the kind we have seen in so many Hollywood blockbusters through the decades, but never in this way. Never in this style. Rarely with these characters and this world. And that is special. That is beautiful, meaningful. I got a feeling watching Seis Manos that I haven’t had since Cowboy Bebop; the feeling that I was watching old tropes and ideas and templates meshed together and repackaged into something bold and brash and novel. Something I’d never seen before. That is not a feeling to be missed, and if you have any love for Kung-fu, 70s exploitation or seeing marginalized, underrepresented demographics take center-stage and kick a ton of ass, this show is not to be missed, either.