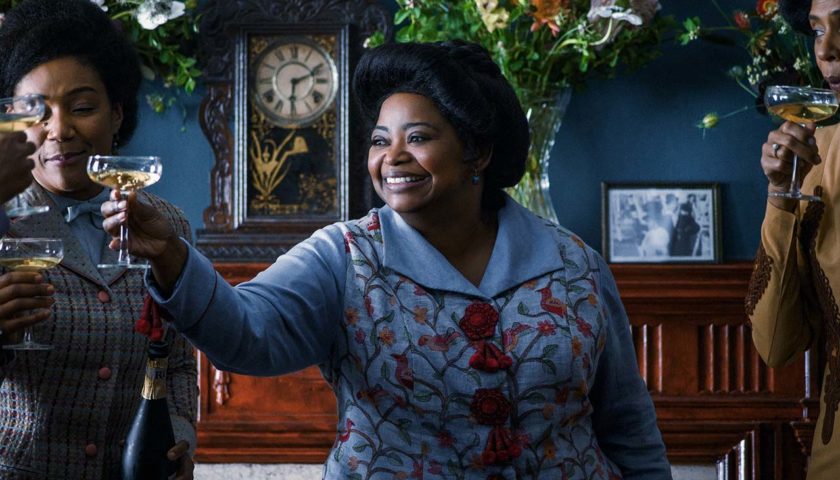 Octavia Spencer initially appears as Madam C.J. Walker — the legendary turn-of-the-century hair entrepreneur and America’s first self-made millionairess of any race — as a boxer in the ring. “No matter what, I refuse to give up the fight,” she says, encased in a navy satin robe with even shinier red trim, holding up her boxing gloves to knock out whoever stands in her way.

Suffice to say, Netflix’s Self-Made: Inspired by the Life of Madam C.J. Walker isn’t a standard — or subtle — biopic. (Divided into four parts, it’s also more miniseries than feature.) Later, Sarah Breedlove, as Madam Walker is known to her friends and family, imagines a chorus line of tap-dancing stylists as part of her charm offensive to woo investors.

Such anachronistic larks — which also extend to the dialogue, themes and performances — define, and ultimately diminish, Self-Made. The real-life Walker, along with her daughter A’Lelia, who would become a major patron of the Harlem Renaissance, was clearly a forward-thinking, politically engaged visionary who benefited from rejecting many of the ideas that held back other women of her generation. Walker presaged the “black is beautiful” movement, foresaw female entrepreneurship as a route to women’s financial independence and donated widely to black philanthropic efforts — much of it before she gained the right to vote.

Save for a few historical touchstones — Booker T. Washington (Roger Guenveur Smith), W.E.B. Du Bois (Cornelius Smith, Jr.), Jim Crow and a living memory of slavery — pretty much all the dialogue could be transposed to today. (And since the series spans about a decade, it’s also frequently baldly expository.) Even before the hip-hop and rock soundtrack starts playing, writer Nicole Asher’s point is obvious: The issues that Sarah tackled and the perspectives she championed are ones we’re still grappling with today, from the bias against darker-skinned black women and the need for inclusive (rather than narrowly aspirational) marketing to men who let their egos get in the way of supporting their wives and the search for compassionate models of capitalism that take into the account the well-being of workers.

It’s pretty much Spencer alone who’s able to make this mish-mash between the past and the present work by lending her character a sense of groundedness and vulnerability. In contrast, Carmen Ejogo, as Sarah’s light-skinned (and highly fictionalized) rival Addie Munroe, is a soap-opera villainess. Blair Underwood, as Sarah’s increasingly resentful husband C.J., lacks any semblance of depth.

But the weakest performance belongs to Tiffany Haddish as Walker’s daughter Lelia, a sexually experimental party animal and the only target of her mother’s remaining conservative instincts (“Go to college or find yourself a husband,” admonishes Sarah). Sounding exactly like she does on the stand-up stage, leading with her hard-earned, late-thirtysomething DGAF brio, Haddish sticks out like a neon green vape pen getting tangled in the spokes of a penny farthing. (You almost expect Lelia to start telling her dates about the time she went on a swamp tour with Will and Jada Pinkett Smith.)

The creative team — which includes executive producer Kasi Lemmons (Harriet), who directs the first two episodes — might also presume too much knowledge of black hair politics on the part of the audience. Sarah bristles when a foe accuses her products of “sham[ing] Negroes into Eurocentric standards of beauty,” but we see over and over again the Walker women with straightened hair and their customers with hot combs run through their curls. It would’ve helped to parse out the nuance there to better understand Walker’s point of view, especially as it was informed by her time period, but Self-Made is too afraid of complications mucking up its feel-good narrative.

Despite the ever-increasing size of Sarah’s empire and the occasional outrageousness of her plans, Self-Made quickly feels repetitive: Her loved ones keep betraying her. But the interpersonal dramas fail to register because Sarah has few flaws of her own — it’s everyone else who needs to recognize her genius and get out of her way. The production’s deliberate chronological confusion also makes it sometimes hard to appreciate how revolutionary Sarah’s ideas and accomplishments actually are. Too often, Self-Made feels like a portrait of an insurrectionist standing in a white void.