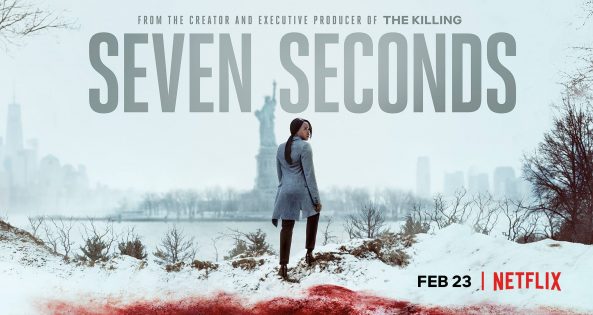 Review: Seven Seconds centers on a Jersey City PD narcotics team, and their possible cover-up of the hit and run of a black teenage boy. The team is headed by Sgt. Mike DiAngelo (a chilling David Lyons), resilient and respected among his team, and officers within the department. Mike, who has no children of his own, takes young, and mostly naïve, officers under his wing and shows them the ropes with some tough-love and conditioning. Think Denzel Washington’s character in Training Day and you’ll get a really good idea of Mike DiAngelo’s personality.

DiAngelo’s newest recruit is the young, soon-to-be-a-daddy, Pete Joblonski, a cop transferred in from a “better part of the city”, at DiAngelo’s behest. The two share a loose familial bond; but that’s enough for DiAngelo to vouch for Pete and to know that he can trust him to fall-in-line when needed. Narc veterans “Manny” Gary Wilcox (a convincing Patrick Murney) and Felix Osorio (a shining Raúl Castillo) round-out the four-man Special Investigations and Gang Unit of the JCPD. This team will do virtually anything for their leader…no, scratch that, will do anything at all for DiAngelo. He is a god in their eyes.

It’s the early-morning hours after Valentines Day, and Pete is rushing to the hospital to meet his pregnant wife. The roads are slick, the snow is falling. Pete is distracted on the phone. Without a visible cue to the audience, Pete slams on the breaks and wipes out. He’s fine, but what’s under the car is not. Thankfully, we’re spared from the gory view. All we see is a bicycle tire spinning, and a homemade paper seagull attached to the frame…the significance of which becomes quite compelling when we do learn the nature of the two.

The driver of the bicycle is a young, black teenager named Brenton; a suspected “banger” from Jersey City’s most feared gang. DiAngelo, with the rest of his team in the backseat of his seized-from-a-drug-dealer sports car, arrive on scene to find Pete still behind the wheel of his slightly damaged SUV, and a blood trail leading to a ditch. It’s one’s moral duty to render aid to someone who is injured. This thought would cross anyone’s mind when seeing someone critically hurt, but a cop….well, they’re obligated to help.

DiAngelo follows the blood trail to a ditch where he finds Brenton’s broken body, and a serious pool of blood. What does he do? What any selfish cop would do. Fearing an incredible backlash from the (mostly black) community over the recklessness of a white cop’s actions against a black kid, DiAngelo orders Pete to leave the scene, and instructs the rest of the team to clean up the evidence. Forget about the kid in the ditch, “He’s nothing.”

The boy’s parents, devoted and pious Latrice and Isiah Butler (the brilliant Regina King and the marvelous Russell Hornsby) also become victims – right from the get go. Victims of an anachronistic system where the black population are at a disadvantage starting from birth. Does anyone care about their rights? Does anyone care about Brenton? As the story plays out over the full 10-episodes, we discover the answers to those questions and get an intimate look at why “Cops don’t go to jail”, especially if the victim is black.

The series has many twists and turns, most will be of the “blind-sided” type. This isn’t your typical, “I know what’s coming next” kind of plot, even though the story may seem similar to you. For whatever reason, we have this insatiable appetite for police procedural TV, going back at least 60-years with “77 Sunset Strip” (1958 – 1964). Hawaii Five-0, Hill Street Blues, Miami Vice, Law and Order, LA Law, CSI, to name a few more. Certainly, there are a lot of shows on TV that “play the race card” and attack police for their bias. I admit I was a little skeptical of Seven Seconds at first because of that. Like those silly “coming of age” movies I’m so sick of watching, has this topic not been done enough? Are we not yet bored by dramatizations of white vs. black, race on race, BS shows? Why do we need to see another?

According to one website, of the last two-decades, ¼ of the top-40 shows on television are police-procedural. I’ve seen them all (shows like NYPD Blue, Law and Order, Homeland, The Wire) and there isn’t a single show within the group of 10 that, at some point, didn’t deal with race-relations and police bias. Most were fictional, some based on true events. The sad truth is, without real life stories, the writers would have nothing to write about, and we’d have a lot less TV to watch.

There is an element of truth to Seven Seconds. The series seems plausible, especially to those (black or white) who have had some dealings with the law. Mentions of the Ferguson, Missouri shooting come up, as do other similar real-life occurrences that have happened. We are reminded, again, of how archaic some things, some people are. Sadly.

This series is powerful, and moving, make no mistake. The characters are deep and complex. They have flaws and secrets. They are like you, me, and our neighbor. The production value is what you would expect from Netflix; no expense is spared to make everything as realistic as possible.

A favorite quote of mine is by Dante. It goes, “The darkest places in hell are reserved for those who maintain their neutrality in times of moral crisis.”

That moral crisis is race relations within our own community, specifically with police. This has always been an issue during my lifetime (I’m middle-aged), as it was during my parents’ and my grandparents’. Whether the place you call home is Jersey City, or Ferguson, or where I’m from, we have all seen parts of “Seven Seconds” play-out in real life. I know I have, in more ways than one. That’s what makes this series hurt so much.