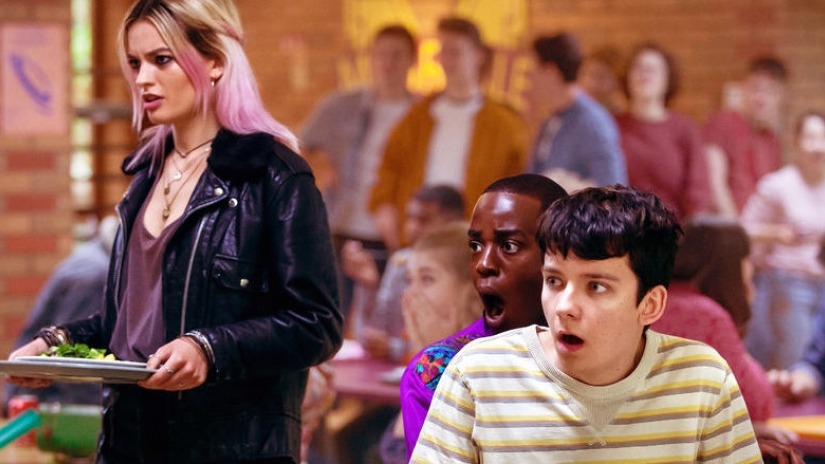 However, the streaming service’s English language YA stories have never been as horny as the hormone-fueled fans watching at home likely are. The End Of The F***ing World goes for sweet over sultry every time. Even the siren song of Chilling Adventures of Sabrina merely glanced at a fairly covered-up orgy.
But, this repressed problem will finally end with Netflix’s latest British comedy, Sex Education, premiering Friday, January 11. As you can guess from the title, this is a show absolutely obsessed with sex: talking about it, showing it, giving us labeled anatomical diagrams of the body parts often involved in it. But, there’s also a lot of heart hiding beneath all of Sex Education season 1’s banana-themed oral sex tutorials and bum-ogling classroom quickies — in fact, there’s more than enough to make you fall in love.
While Netflix’s new teen show is called Sex Education, the twist is in its hero, Otis Millburn (Asa Butterfield). The comedy’s leading man is, much like Colton Underwood, a virgin. He’s also the son of a single mom and published sex therapist, Jean (The X-Files‘ Gillian Anderson). While Otis was raised in one of the most sex-positive homes ever captured in fiction, the 16-year-old is deeply afraid of partaking in anything in the realm of sexual intimacy. (Even with himself, if you catch my drift.) The reason for Otis’ lack of experience — which is never treated as a gag, unlike the behavior of some other shows — becomes an illuminating way into the Millburn family’s past.
But before Sex Education starts investigating Otis’ deepest neurosis, there is the central plot to get to. Namely, the sex education of his peers. Despite the teen’s virginity, a lifetime with Jean has made him a sexpert in his own right. When Otis’ classmate Adam (Connor Swindells), a character who has full-nude, explicit doggy-style sex within the comedy’s first minute, suffers a penis-related emergency, it’s Otis who has to talk him down. Thanks to some intense, immediate, and extremely empathic sexual therapy, Otis saves the day (and the penis).
In an instant, Otis’ classmate Maeve (Emma Mackey), a down-on-her-luck local genius with to-die-for Brit punk style, realizes a business opportunity is staring her in the face. So she goads Otis into starting a sex therapy clinic partnership: She handles the money, client-finding, and appointment-making while he does the therapizing. They split the profits. The only downside is the fact that Otis’ longtime BFF Eric (breakout Ncuti Gatwa), a queer boy and son of conservative immigrants, has no place in the sexy money-making scheme.
Thankfully, Eric still manages to find an unforgettable journey for himself, and it’s an intersectional marvel viewers rarely see. Otis, a lovable introvert who excels at longing stares, does as well. However, by the midpoint of Sex Education, you realize this is a series that belongs to its teen girls.
Pink-haired, leather jacket-wearing Maeve steals the show as a relentlessly complicated young woman who is more than some manic pixie dream girl for Otis to moon over. Everything from Maeve’s tangle of family problems to her crackling wit (what turns her on? “Complex female characters”) and unapologetic sexual appetite often makes her Sex Education’s most compelling character. That’s why the season’s third episode, which is anchored by a powerful Maeve storyline, is so very compelling.
Speaking of complex female characters, Maeve isn’t the only one populating Sex Education. Beleaguered cool girl Aimee (Aimee Lou Wood) has a scene of self discovery that is laugh out loud funny. Otis’ mom Jean opens up 2019 with one of the sexiest courtships of the year. Each and everyone one of Otis’ women patients, who only pop up for a scene or two, reveals something vital about girlhood sexuality. But, Lily (Tanya Reynolds), a teen girl armed with a very specific fetish and a steely determination to get laid, runs away with every single one of her scenes. Lily is entirely her own yet still completely relatable. Lily is our queen.
And Sex Education is destined to be Netflix teen show royalty.