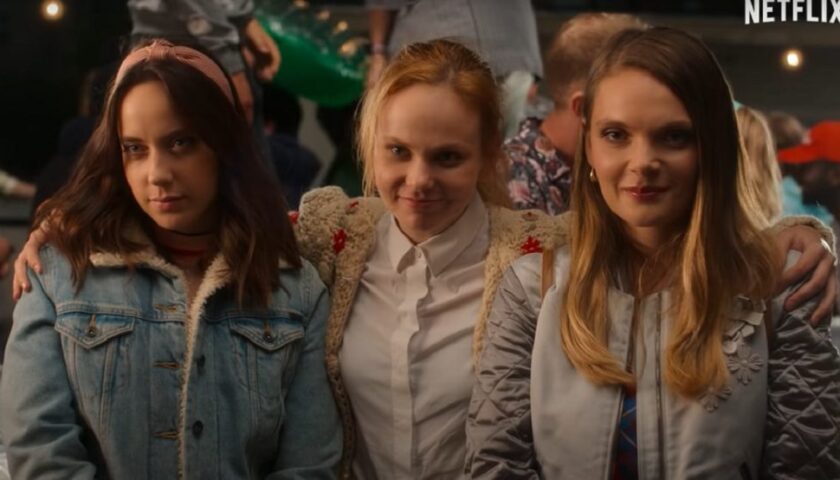 Natalia (Aleksandra Skraba) needs sleep. Like, really needs it. Sleep – or “SEN” in Polish – is the name of the sleep optimization app she’s been coding for the last three years. Natalia has forgone partying, dating, and, working anywhere fancy in an effort to make sure her app wins an important competition when she finishes university. When a new professor tells her she’s got no chance at winning with an idea this boring and unsexy, Natalia is devastated.

While Natalia considers other options (including collaborating with a classmate/potential love interest whose app idea involves Bluetooth-operated hair gel), her best friend Paulina (Maria Sobocinska) is dealing with her own issues. While she’s certainly fond of her boyfriend, his pumping away at her for a couple minutes a day in missionary position (and not considering her needs at all) obviously contributes to her hesitance when he proposes at his parents’ anniversary dinner. Before she gets a chance to squeak out any answer whatsoever, they all assume she’s said yes, and she’s engaged, much to her… indifference?

Our third leading lady is Monika (Sandra Drzymalska), a rich girl who finds herself kicked out of her fancy apartment and back in the dorms after her important father discovers she hasn’t been attending university for 6 months. Less interested in school and more into sex, Monika entertains suitors in her new dorm, much to the annoyance of neighbor Natalia. After a chance encounter one evening, however, Natalia realizes that Monika isn’t just another mattress-thumping dorm neighbor. With help from Monika and Paulina, Natalia realizes what her new app will focus on: sex. Now this sexually-inexperienced science geek just has to figure out where to start.

There’s been a Sex Education-shaped hole in my heart since I binged through Season 2 like some addicted maniac, and I never really believed anything else could help fill it. Fortunately, Sexify is just the ticket, effortlessly combining an educational setting with friendship and, well, sex education. If you’re new to the foreign-language content game and hesitant to dive into Sexify because of the language barrier, I urge you to shake it off and give it a try. Good writing, strong characters, and a clever premise are obvious in all languages, and you might even learn a Polish word or two.

Sexify‘s pilot does such a wonderful job at establishing our characters and ensuring that we see them as fully fleshed-out (no pun intended) human beings with their own lives and issues before ever bringing them together, and that patience really pays off. While Sexify wastes no time in getting to the sexy stuff – there is no shyness here about nudity and the like – it also makes clear early on that this isn’t going to be some exploitative romp. Our three leading ladies all embark on their respective journeys – both sexual and not – and are brought closer to one another in the process. This isn’t just a show about stripping down or making the grade; Sexify is effective because of the female friendship at its center. There’s plenty of sex and silliness to be had, sure, but what makes Sexify worth watching is its big, bold heart.